Zapatero’s desalination plants generate up to 0.2% of the promised water while the drought hits the countryside

The drought spreads through Spain and threatens the field crops and the future of livestock due to the lack of water. The farmers products are thrown away because it is cheaper than continuing their work, which generates scarcity and price increases of food. The next step is the CPI risethe loss of purchasing power of the citizens and the consumption reductionwhat slows economic activity and GDP. The government of Pedro Sanchez has announced that it will invest 300 million in new desalination plants to alleviate the situation, while those it started up Jose Luis Rodriguez Zapatero to knock down the transfer of the Ebro of the PP are generating in some case 0.2% of promised water.

The former president said in 2008 in Congress that with his desalination program “The water problem will be resolved in four years in all the autonomous communities”. According to the data compiled on the production of desalinated water by the plants that Zapatero started up -managed by the public company Acuamed-, the Sagunto desalination plantwith an investment of 37.7 million euros and a capacity of 8,000 hm3, in 2020 -last year published- it generated 15.8 hm3, 0.2% of the total.

Of the eleven desalination plants that are active – he promised several dozen – six are below 50% production, turning Zapatero’s AGUA Program into another fiasco for his government. the of Oropesa (Castellon)with 63.2 million investment and 23,000 hm3 of capacity, generated 3,935 hm3 in the last year that there are records, 17% of the total, as seen in the graph. 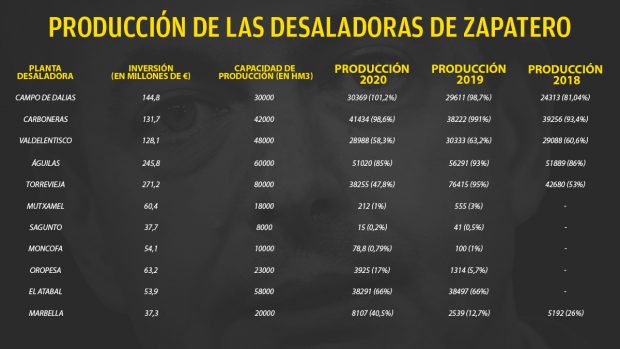 Below half of its production is also that of Marbella -40.5%- and the Torrevieja -47.8%-. Only Carboneras (Almería) and Campo de Dalías (Almería) have exceeded 95% of their production capacity. In addition, that of Lower Almanzora (Almería) was flooded in 2012 and continues without any activity.

Almost 1,000 million euros invested and a transfer of the Ebro repealed that have not served to “fix the water problem in four years”, as Zapatero promised. The current drought has revealed a problem that has existed in the Levante area, especially on a recurring basis, even without drought. Furthermore, as many experts predicted at the time, desalinated water is more expensive and farmers are often unable to afford that cost.

While the Minister of Agriculture, Luis Planas, has assured that he will convene the drought table in the coming days, the countryside is getting rid of its productions because it cannot maintain them. Food prices skyrocket, affecting general inflation and reducing consumption and economic activity. The Government has announced an investment of 300 million to increase the capacity of desalinated water in the country.

War in the Pogba clan: Mathias threatens with "explosive revelations" about his brother and Mbappé