Young people raise their voice again against climate change: “We are those children who no longer have anything” 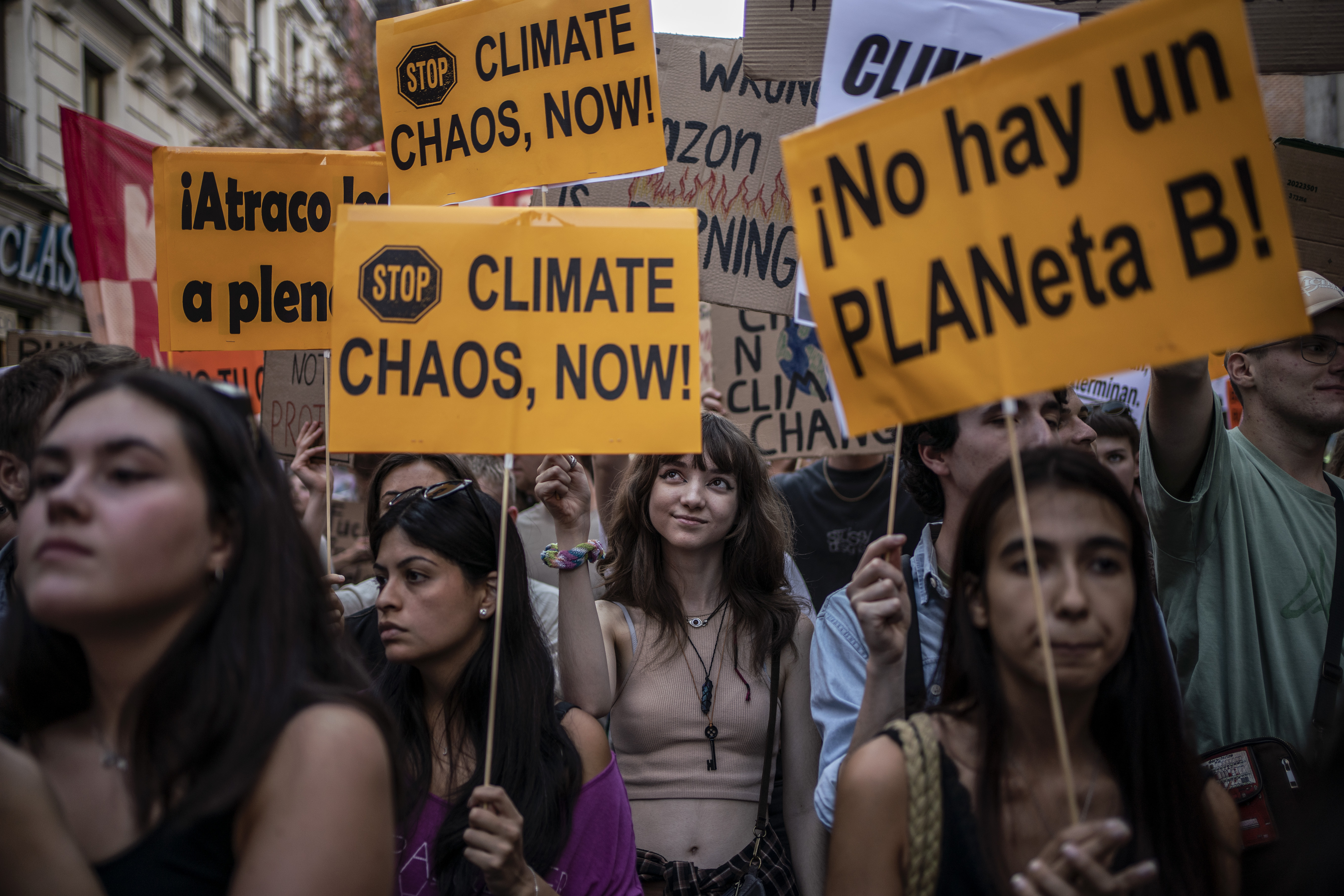 “There is no, there is no planet B”, was heard this Friday in the Plaza Mayor in Madrid with the background sound of the batucadas. The international youth movement against climate change Fridays For Future has taken to the streets against the environmental crisis and for the transition to a more sustainable model in 450 cities around the world, from Japan and Germany to the Democratic Republic of the Congo. Only in Spain there have been concentrations in 22 cities. Convened for the first time in 2018, and very affected after the break caused by the pandemic, the organization is now trying to resume the great momentum that these demonstrations had at the beginning. This year’s slogan is “democratize energy”.

In Madrid, at six in the afternoon, banners filled the Plaza Mayor with messages that read: “So much meat here, hunger in the South”, “Contaminates and Manta more” or “Change your life, not your climate”. Some 5,000 people have gathered, according to the organization, which also calculates that there have been some 36,000 in Berlin and that the seven concentrations called in as many Austrian cities have added 20,000 more attendees.

In the one in the Spanish capital, between purple, red and green flags, organizations such as GreenPeace, Democratize Energy, Friends of the Earth and other social movements have joined the concentrations. Ariana Zumaran Jibaja, spokesperson for the Regularización Ya collective, points out that, in her case, her main demand is the end of the exploitation of resources in underdeveloped countries. “Large economies benefit through companies that operate in different countries. They often work in natural areas where they would not be allowed to operate in Europe.”

Carlos Lobo, a 23-year-old from Madrid and spokesperson for Fridays For Future, explains the nature of his alarm over the climate crisis: “We are concerned and we see that nothing is being done. We are those children who no longer have anything,” he says. Sergio Aires Machado is 18 years old and lives in Valencia. He has been part of the movement for two years. His main motivation for joining was that he “seen himself reflected in the youth who demanded change”. Irresponsible tourism and the rise in sea level on the Valencian coast are his main concerns. “The most serious thing and what is going to be more difficult is to change the capacity of action of the institutions, because no matter how much science and experts say what is wrong, the representatives do not take change seriously” .

The rallies of young activists take place six weeks before the UN climate summit, known as COP27, in Sharm El-Sheikh (Egypt). The conference will concentrate its efforts on discussing the reduction of greenhouse gas emissions, securing financing to mitigate the repercussions of climate change in the poorest countries, especially in Africa. A report published by the World Meteorological Organization warns that by 2030, up to 118 million Africans will be exposed to droughts, floods and extreme heat.

“I come because I no longer trust corporations or the current government. They always have that attitude of being very green ecologists and with a lot of promises that they don’t keep,” laments Youssef Moussadak Bonnet, a 22-year-old philosophy student. With a red flag that says “against the current”, Moussadak acknowledges: “The only possibility we have is to organize ourselves to make a more radical and anti-capitalist policy.”

The youth movement denounces “a multiple energy, climatic and social crisis”. Lobo assures that this year the march is especially important because we are in a context where there is an increase in prices due to the high price of energy. “To this we must add the energy poverty of families who cannot pay their electricity bills. The energy crisis does not affect us all equally,” he points out.

For Fridays For Future, the responsibility for climate change is not the same for everyone. “It is a question of great privileges. The richest 1% of the population pollute twice as much as the poorest 50%”, says Lobo. A problem that is reflected in the disproportionate use of private planes by the richest. One hour of flight in these vehicles can emit two tons of CO₂, when an average person in the EU emits 8.2 tons of CO₂ over the course of a full year, according to a 2021 report from Transport and Environment.

The voices that warn of the imminent arrival at a point of no return in the climate crisis are more and more numerous. UN Secretary-General António Guterres called on the international community on Thursday to hold a “serious discussion” on the consequences of climate change. Guterres expressed his concern about the floods in Pakistan, which have left 1,500 dead, including 552 children. “I was recently in Pakistan where I was horrified by the devastation and suffering caused by unprecedented flooding. Today it is Pakistan, but climate catastrophe is knocking on everyone’s door,” Guterres said.

Under the banner “We are also in danger”, Sofía Sánchez, 22, said: “There are already people who are having to leave their homes and their countries due to the climate crisis.” She is accompanied by her mother, Rosi González, 54: “I fight for a better planet and for the future of my daughter.”

Versioning: More CI/CD support in VS Code for GitLab 15.4