“We do not have the punitive gaze of the agents, we are not there to impose anything on them.” The one speaking is Fátima Cevallos, 31 years old and coordinator of the group of young social integrators —all are under 30— that the Sant Boi de Llobregat City Council (Barcelona) has taken to the streets to end neighborhood conflicts between generations in points hot in the city They, a group of five, explain that in the “street routes” that they carry out from Thursday to Saturday, from five to nine at night, through the main squares of the municipality, they try to get closer to young people who have been left out of the system. to try to get them to regain their interest in studies and to design the city’s youth programs with them. “Many times these meeting points in the public space are the result of frustration and that ends up confronting the well-being of the neighbors,” says the mayoress, Lluisa Moret, a clinical psychologist by training, who acknowledges that the intervention of the municipal police does not solved the problem, as these were specific actions that did not address the causes of the crash.

The Consistory launched the idea in 2019 thanks to the European Regional Development Fund (Feder), with which it paid for the hiring of a social educator and four integrators with the aim of turning around the way of dealing with problems of coexistence and traditional citizen participation processes, clearly “insufficient”, according to Moret, from the Partit dels Socialistes de Catalunya (PSC). “Young people are not going to come to your office, you have to go where they are,” she says. The Casino, as the Plaza Asamblea de Cataluña is popularly called, was one of the most troublesome points, with some 60 noise complaint calls from neighbors a week. “It is a plaza that is already stigmatized, more than 20 years ago drugs were consumed and passed around, it is difficult to put an end to that image,” says Lara Izquierdo, one of the 25-year-old integrators.

In the center of the square there is a court surrounded by stands and then you can see the windows and balconies of the residents of the area. A sign hangs from a lamppost: “From 8:00 p.m. to 8:00 a.m., respect the rest of the neighbors.” The municipal ordinance regulating sound in public spaces contemplates that “acoustic impact devices” are not used or “activities” are carried out from 11:00 p.m. to 7:00 a.m. A different interpretation of what is considered noise was always the focus of the discussion. 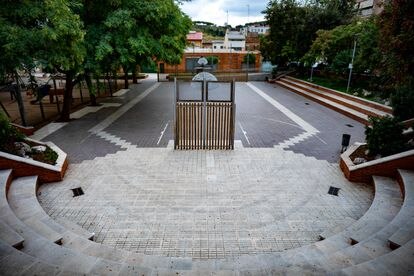 The first meetings between the social integrators and the young people of the square, most of them between 16 and 24 years old and of Moroccan origin, have already been fruitful. “The fact of not wearing a uniform and of having a similar age to theirs opens the door for them to communicate with us”, explains the coordinator of the project, called Fem Carrer (we make streets), Fátima Cevallos. Until then, the only notion that the kids had of the City Council were the agents. “It didn’t work because the police always arrived when the bad vibes had already occurred… we were interested in their way of life, in what leads them to be in that square, to listen to their speech… and everyone had the feeling of rejection by the residents of the area, they felt that they did not fit in”. Feeling heard means negotiating with them about when and how to make noise is possible.

Asun Llena, professor of social education at the University of Barcelona (UB) and member of the GPS research group, on social pedagogy, stresses that the figure of the street social integrator is not new. In Spain it became popular in the 1970s and was used, above all, to try to alleviate the heroin crisis. Although she acknowledges that there are still no conclusive studies of the long-term effects of this type of intervention “in the open environment”, she points out some of the advantages. “Those who do not have money to buy a PlayStation and have to make more use of public space are criminalized. These kids often do not have a reference adult figure and the appearance of the social integrator is key. It gives them ideas, acts as a bridge with the administration and, unlike working at the physical headquarters of an institution, where there are always rigid rules, street interventions allow for agreements on how that relationship will be… yes they don’t comply, they know they can’t be kicked off the street, and that makes everything flow.”

The UB, together with five city councils in the Barcelona metropolitan area, is starting a study this month in which they are going to analyze what impact the actions of street educators had and are having today 10 years ago on kids who are now adults. 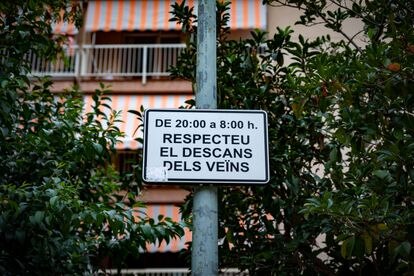 Poster that requests respect for the rest of the neighbors between eight at night and eight in the morning, installed in the Plaza de la Asamblea de Cataluña in Sant Boi de Llobregat.Kike Rincon (Kike Rincon)

“It is a complicated job, at that age they are going through a convulsive moment and to generate a bond with them they have to allow you to enter their life. We work together with the counselor of the Youth Service of the City Council, with the psychologists… they are very demotivated as a result of the pandemic”, indicates Lara Izquierdo, who points out that a recurring thought is “what am I going to make an effort for?”. The common denominator is that they see no future. What worries integrators the most is the isolation and loneliness of young people. “We help them with their anguish or anxiety. They may have 7,000 likes on their social networks, but they complain that later it is difficult to find someone to talk to when they are not feeling well, ”she adds. “Those who are daily in the squares and in the parks have left their studies, the educational agents have not been able to reach them”, says Fátima.

With the kids from La Casino, a square that has not received complaints from the neighbors for months, they have organized several soccer parties. The first one was attended by 50 kids and the second, already in a municipal soccer field, more than 200. “In one of the tournaments, one of the boys began to roll a joint. We remind you of our previous agreement, a four-hour activity without consumption. We are not going to judge if consumption is good or bad, that is what they always receive, we are here to build projects and agree on rules”, explains Lara. “We want them to feel part of the city, and for that they have to be part of the design of proposals, we have to respond to their interests,” says Fátima. In addition, they have participated in historical routes through the municipality and in outings to the mountains.

Mohamed, 21, is one of the young people who goes to the square every day. He has been doing it since he was 14 years old. A year ago he managed to get a higher FP degree in computer science and since then he has only managed to work in a laundry. He has now left the job to take care of his mother. “She’s sick and family is the most important thing,” he says. In the WhatsApp group of La Casino there are about 20 kids, five of them are girls. “We don’t do anything wrong, we go play soccer and eat pipes… we’re always the same, we have fun, it’s my group of colleagues.” Mohamed believes that “the old” complained because they do not understand their leisure and that now they look at them with different eyes. “The Police pass by with the car and they don’t stop anymore, they see that we are with City Hall personnel and they no longer see us as a problem.”

“Our objective is to bring them closer to all the services of the City Council, from academic to employment guidance, to resolve any doubt, so that they always have someone to turn to,” explains Yolanda Molina, head of the Youth Unit of the Consistory. One of the strategic lines is to hire as integrators young people from the municipality who have studied this training —a higher degree of FP—, in one of the local educational centers.

One of the most recent projects is a new parkour space (a practice that uses different types of urban architecture to overcome obstacles) endowed with 100,000 euros that a group of young people have designed following their criteria together with municipal architects. “They used to get together in a park and the neighbors protested because they jumped on the benches… We brought them together and selected eight of them, all with a vulnerable socioeconomic profile, they signed up for a 100-hour formwork course —with a degree issued by the Department of Occupation— and now they are also participating in the construction”, points out Yolanda. The kids receive 500 euros for three months as internships.

Javiera Pacheco, 23, is herself another example. She came to Sant Boi at the age of nine from Chile. A few months ago she met the group of social integrators through a neighbor from her neighborhood and she has managed to set up her own music event. “I studied a FP degree in aesthetics, but it was not my passion. My family needed me and I started working in the bar we have… now this musical project is my dream, I want to dedicate myself to this and they have given me a space so that any young artist can come and show what they know how to do. It takes a few hours, but for me it’s a world.”

The chimneys stay their hottest second