Why it is good to go to school by bike, according to pediatricians: physical health, self-esteem and less anxiety 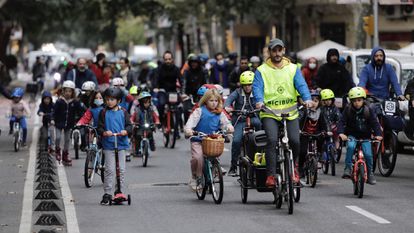 The Barcelona bus that leaves the Sant Antoni market and arrives at the La Modelo schools, in an image from last year. Massimiliano Minocri

They are all advantages. Riding a bike to school improves children’s physical condition, school performance, autonomy, emotional well-being and self-esteem… and reduces overweight, cardiovascular risk and the risk of suffering from psychosomatic illnesses, depression and anxiety. In addition, it is fun, does not pollute, reduces accident rates and pollution: atmospheric and acoustic. It is not proselytizing. The pediatricians of the Catalan Society of Pediatrics say so, who this Friday have called on the municipalities to create cycling infrastructure in school environments.

Hug Noguerol, from Barcelona, ​​is 12 years old and expresses it in other words: “By bike I feel calm, it takes less time than walking, you go faster, you have fun and it changes your mood, you clear your brain and you come to class fresher” . He made his debut going to school by bicycle last year on the Sarrià (Barcelona) bike bus, an initiative in which families pedal together to school on Fridays. This year Noguerol cycles to and from the institute every day. The first week he was “embarrassed” in case a classmate laughed at him, but he has already forgotten, he says.

The request from the Catalan Society of Pediatrics to create safe and cyclable infrastructures to go to school is part of the “To school, pedal” campaign launched by the Professional Association’s Environmental Health Working Group. They have compiled studies from organizations such as the World Health Organization (WHO), the Barcelona Public Health Agency, the Mobility area, the Department of Health of the Generalitat, the General Directorate of Traffic (DGT) or the United Nations and have presented in Olot (Girona). And they conclude that the bicycle is a positive “social tool”. “It should be a priority public health strategy due to the enormous benefits it has for a reduced cost,” the document states. “It has a direct impact on the reduction of diseases in childhood and is an easy and fun way,” they say, “to comply with the daily hour of moderate-intensity exercise recommended by health authorities.”

Berta Vázquez is the mother of Hug Noguerol and applauds the idea of ​​a “social tool” referring to the bicycle. He points out that the Sarrià bike bus, in which several schools participate, has made it easier “for families from different educational centers to meet each other, now greet each other in any situation and create a neighborhood network that if it weren’t for the trip on Friday, would exist”.

One of the pediatricians who has prepared the document and coordinates the Environmental Health Working Group is Ferran Campillo, who underlines “the importance of safe school environments” to facilitate “a tool as powerful as the bicycle for health” . “Beyond issues such as being overweight”, he highlights other benefits such as “self-esteem, the feeling of belonging” or the fact that children who go to school by bike “are more attentive and willing to learn than those who come to the classroom after being in a car and in traffic jams.”

In addition, he points out that schools where the City Councils have ‘pacified’ the environment (where there is less traffic and more space for pedestrians) “multiply by three the chances that students get on the bike.” “It is very important to start with the schools because the little ones are a lever of change in their environment, starting with their parents if they accompany them by bicycle,” he says, and recalls that one of the campaign’s requests is to install sensors to measure pollution. and thus make families aware of the impact of pollution. “It’s amazing to see that parents are able to drive their child to school and leave the engine running for 15 minutes.”

Beyond the benefits that pedaling has for children, Campillo underlines the importance of reducing pollution from cars due to the effect it has at an early age. The smallest ones, he explains, have a series of characteristics that make them especially vulnerable to environmental aggressions. For starters, being lower in height, they are more exposed to tailpipe emissions and commuting to school coincides with rush hour traffic. “Moving from home to school has a significant influence on the daily dose of contamination they receive,” he notes. And another reason: “Children breathe more times per minute and more air per kilo of weight than adults. And at the same time they present a structural and functional immaturity that limits their detoxification and favors the bioaccumulation of polluting particles”.

Among the striking data compiled by the campaign are also those referring to the accident rate and recall that the majority of traffic accidents with school-age victims occur near schools and especially in environments with a high intensity of motorized traffic.

The campaign of the Catalan paediatricians adds to initiatives that in the last two years have emerged in schools in the community and have spread throughout the territory. The first was the school revolt, which calls for peaceful environments to avoid air and noise pollution and accidents. Then the bike buses on Fridays, in which families get together to pedal to school. The Barcelona City Council, for its part, has been creating spaces to stay in front of schools for three years: some interventions (they will be in 2016 before the elections), which are won on the asphalt and at the cost of parking spaces or traffic lanes.

Amazon: Alexa can answer questions with advertising in the future