Why does it smell of burning in Madrid and Ávila? Smoke from Portugal’s fires spreads across the plateau

The sky of the center of the capital is this Tuesday covered by a white fog, which makes it difficult to see. Smoke and the smell of burning fill the streets. But no, there has not been a fire in Madrid. The smell comes from a fire in Portugal, which due to the direction and strength of the wind has traveled about 350 kilometers. The effects of this cloud that comes from a fire near the border, in the town of Lajeosa da Raia, have also been felt in Castilla y León.

According to Rubén del Campo, spokesman for the AEMET, the fog and the strong smell of burning have reached Spain due to the strong wind blowing from the west. Javier Chivite, spokesman for Emergencies 112 of the Community of Madrid, explains it this way: “This is due to atmospheric and meteorological circumstances that help the smoke to have traveled here. It is a technical issue. The air rises to the upper layers of the atmosphere and the smoke runs very fast”.

It is a fire that originated in the Portuguese town of Lajeosa da Raia, located to the west of the province of Salamanca. The strong gusts of wind from the west have caused the smoke to cross the Peninsula and reach the Community of Madrid, where citizens wondered about the origin of the smell and the mist. The emergency number of this autonomy has received dozens of calls during the morning from different points of the region, in which no fire was active. 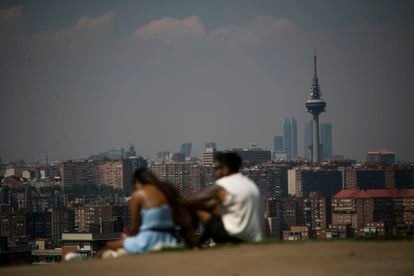 View of Madrid from the Padre Pío park in Vallecas, this Tuesday.Álvaro García

The cloud of smoke could be observed on Monday in Salamanca and this Tuesday in Ávila, where dozens of calls to the emergency services have also been registered. The citizens of these provinces have shared photos of the phenomenon that has turned the sky gray on social networks.