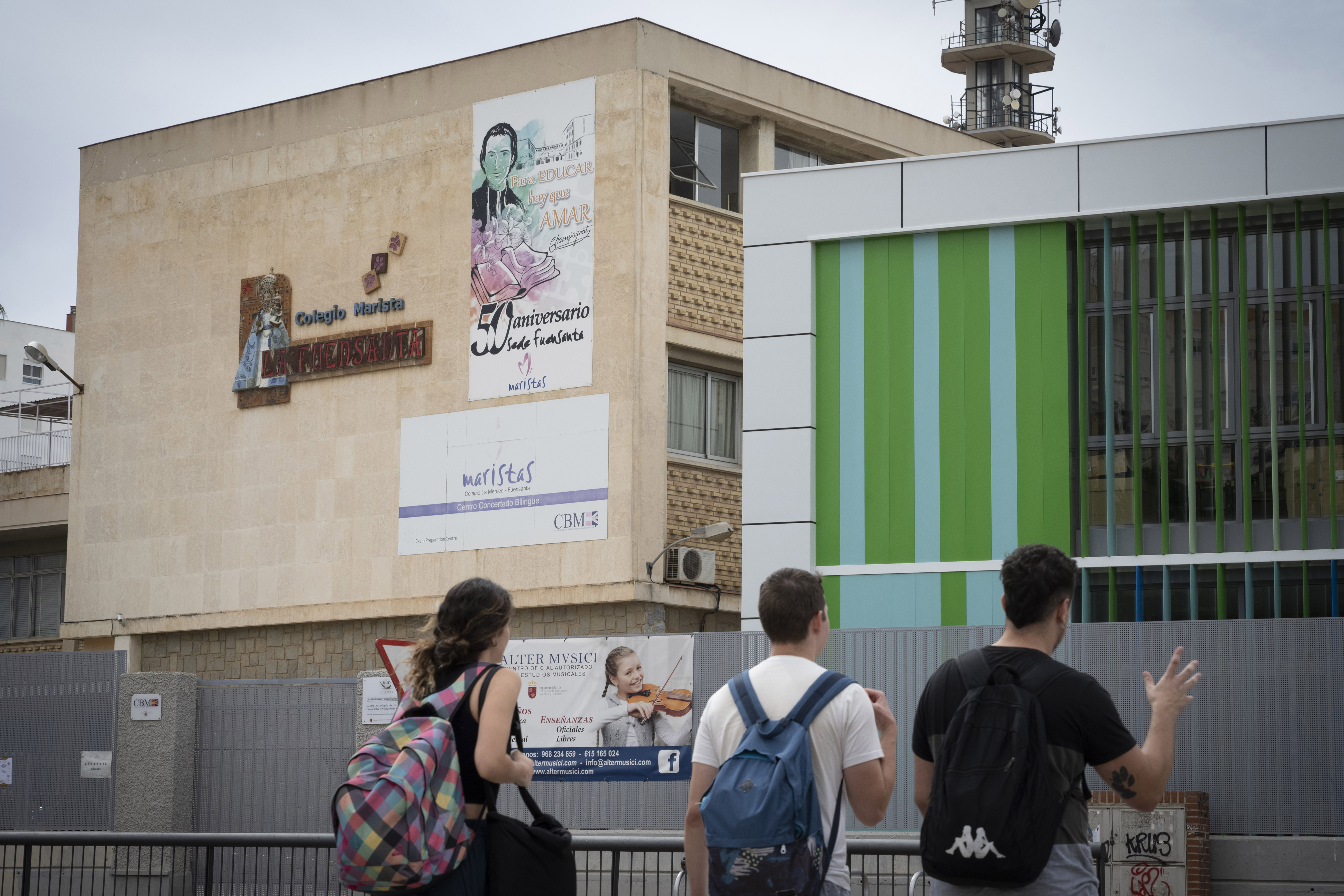 The families of the Fuensanta Marist school in Murcia have discovered this week that one of their teachers, a teacher from 2019 to 2021, had actually been sentenced to 10 years in prison for child abuse in another center in Sagunto, Valencia, in 2019 They have known it because the Supreme Court confirmed the sentence last April and the news was published with the name of the accused. They have found out now because the previous resolution, issued by the Valencia Court in 2019, did not come out and the accused moved to Murcia, where he was hired at the beginning of the course by the Marists. The congregation assures that it was unaware of the conviction, because it did not appear in the teacher’s certificate from the Central Registry of Sex Offenders, a document that is mandatory for teachers, monitors and anyone who works with children at the time of the contract. And the reason, they argue, is that a conviction does not appear on this record until it is final. Several institutions confirm that, in effect, this is the case, from the Ministry of Education of Murcia to the Ministries of Justice and Education, as well as the State Attorney General’s Office.

Law 26/2015 states: “It will be a requirement for access to and exercise of professions, trades and activities that involve regular contact with minors, not having been convicted by a final judgment for any crime against sexual freedom and indemnity.” The Marists also cite the organic law 8/2021 on the comprehensive protection of children and adolescents against violence. Sources from the Prosecutor’s Office explain that there is a conflict between the presumption of innocence of the accused and the protection of minors, and admit that it is a complex issue in which a debate could be opened for a revision of the system or a possible legal reform.

The exception is if a judge orders precautionary measures pending final judgment, but they are not always taken. In that case, they must also be included in the registry, and they last until the final resolution, judicial sources explain. “The problem is also that the SIRAJ (System of Administrative Records to support the Administration of Justice), the databases with various records of sensitive information, sometimes works like a fairground shotgun, it has flaws,” says a magistrate. “It is the justice administration lawyers of the investigating court who must enter the data. In addition, each autonomous community has its own system and sometimes there is no communication between courts, it has been seen in some cases of gender violence.

The truth is that this case shows that, in the years that pass until a conviction for child abuse is final, and if the judge does not order precautionary measures, it may happen that a teacher continues teaching if the news does not spread and if the schools do not obtain the information by other means. In this case, almost five years passed since the complaint, in 2017, and almost three from the first sentence of the Provincial Court of Valencia, in July 2019, through that of the Superior Court of Justice of that community, November 2019, until the final one of the Supreme in April 2022. The sentence of 10 years in prison was accompanied by four more years of supervised freedom and 16 years without being able to exercise a trade in contact with children.

Meanwhile, the teacher, Juan Tomás Sánchez, changed his autonomous community and went to a center belonging to another religious order. He was in the San Vicente Ferrer de Sagunto school, of the Santo Domingo Educational Foundation, of the Dominicans, and he reappeared in the Marist schools of Murcia, in their center called Fuensanta, one of the two that this congregation has in the city and which is dedicated to early childhood and primary education. The Marists refuse to reveal the details of the teacher’s work, but according to the parents of the students, he was a religion teacher in the third year of primary school and was even a tutor for one of the classes.

The complaint from the Sagunto school was in 2017. The defendant, according to the sentence, abused two underage students from the school. He offered them private refresher classes at his house, and then they watched a movie, a moment he took advantage of to touch them and put his hand under his pants in the area of ​​his genitals. The two boys did not say anything to their parents or at school, but a classmate heard them talk about it, told her mother and she alerted the center. The management then notified his parents and complaints were filed. Since 2017 the track of the teacher has been lost, but in 2019, already with a sentence of first instance, he attends two courses in the Marists of Murcia, until 2021.

The parents of students from the Murcian school have known everything now, when they found the news of the final sentence, which in some media included the name of the inmate. The mother of a student filed a complaint last Monday at the Murcia Department of Education, to which this newspaper has had access, to request an investigation of what happened. Sources from this department point out that no investigation will be opened because “the system has not failed.” They explain that periodically the Ministry of Justice sends them the data of those convicted of sexual crimes so that they can compare them with their lists of teachers, and this case did not appear because it was not a final conviction.

After the newspaper La Verdad published the case, the center issued a statement on Tuesday to explain what happened: “As soon as we learned of this sentence, we began an investigation process to find out if similar events could have occurred in Maristas. We are not aware, so far, of any risk situation or facts of this type in relation to this person and that affect our students. (…) To avoid the presence of people with inappropriate or criminal behavior in our Marist works, we are currently reviewing our staff selection protocol to improve it and make it safer and more comprehensive”.

However, there are some questions that Marists do not want to answer. A former student of the Murcia school, between 1998 and 2001, assures this newspaper that the condemned teacher was already in the center in those years, and was “brother Juan”. The order does not clarify whether Tomás Sánchez is or was a Marist, and therefore they already knew him, nor whether he worked at the center in the past, nor the reasons why, if so, he abandoned it. In social networks, the condemned teacher contains several references to his Marist “brothers” and on the school’s website he is named as coordinator of catechesis for the center’s Christian initiation groups.

On the other hand, parents of students remember that at the end of the course, in 2021, the teacher announced that he was leaving the center to go to South America. His social networks reveal, in effect, that he frequently traveled to Colombia, to places with Marist communities, such as Manizales and La Pola, where he also collaborated in religious centers and had contact with minors. The Marists also refuse to report on his fate after leaving the school. In April 2022, the date of the Supreme Court ruling, the teacher appears to be based in Bogotá on a private class services page. It is presented as follows: “My experience of more than 15 years in teaching guarantees my serious and professional work. Apart from schools, I have given training to adults in emotional intelligence and other topics of spirituality and personal growth, since I am a theologian. As a pedagogue and psychopedagogue I have worked not only in classrooms, but also in consultation with children, young people and some adults with personal problems, especially focused on minors with disruptive behavior.

The lawyer who was representing him until the Supreme Court ruling confirmed to this newspaper that he could leave the country and his passport had not been withdrawn, although after the conviction he had to return, and communicated his intention to do so. Later he changed his lawyer and intended to present an appeal to the Constitutional Court. Penitentiary Institutions could not confirm yesterday if he has entered prison or not.

How much will a family save with the tax cut? And a pensioner? The Government's fiscal reform, in 10 examples