Visit to the Mallorcan workshop of Belén Posse de Rioboo

Rarely have I visited such a splendid workshop, both in terms of the light that penetrates it and the elegance of the spaces that invite relaxed plastic creation, which starts from a previous conceptual approach to later develop, through a strategy which includes colors and techniques for arranging them, like the one the artist from Madrid showed me last week Belén Posse de Rioboo (Madrid, 1959). A workshop located on a hillside with views of the Palma plain, on the way to Valldemossa. A frankly beautiful place, very conducive to artistic work.

The artist also has an interior space, ample as I say, an exterior area where she carries out, when the weather allows it, the dirtiest works, those that require the sprinkling of small particles, the spraying of fixing products, the use of resins , and so on.

When the canvas is large, he works with it on the floor, as far as it can go. I haven’t seen her work live, but I imagine her at one with the canvas and the landscape of the island, and with that special Mediterranean light. Like everyone who, not born here, has chosen this place to live part of the year (he has another workshop in Madrid) and work, the transparency of the air and the friendly climate that surrounds us are elements that forcefully end up penetrating the work, making it more empathetic and generous with the viewer’s senses.

Like many artists of our time, Belén basically works through the web, and by commission. At least that is now the main axis of her professional management. Combined with some usual physical exhibition, like the one this past winter at the Paris art fair, through a conventional gallery, the phenomenon of personalizing relationships, which has affected the private organization of trips, tourist accommodation reservations, purchases in general, all of this carried out by more and more people through digital networks and internet portals, has also reached the art market, as we have commented on these pages previously.

We’ll see where this phenomenon leads us, but for now there are many artists who meet their expectations of getting their work to the public through these new channels. And the next step, the so-called NFTs, virtual works that are specified in an encrypted code, are increasingly in vogue. As it shows that the same Damien Hirst has launched a line of physical works with its parallel work in NFT, and the binary possibility for the buyer: if he acquires the physical work, Hirst destroys the NFT; and if you acquire the NFT, you destroy the physical work, so that only a unique expression of the work remains at the end of the process. 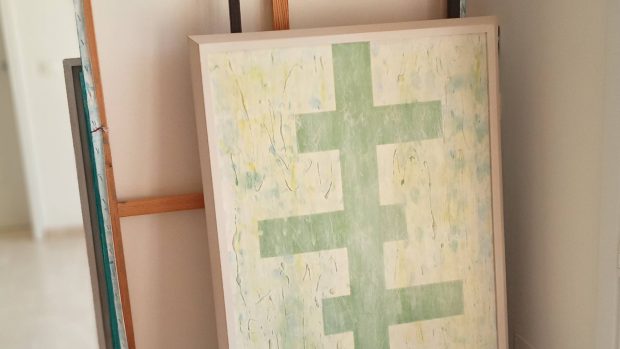 Partial image of another work by the artist.

Belén Posse de Rioboo is also making its way into NFTs, and into other works with a non-purely conventional foundation, as is the case with the series that began this winter with the expression of the sound wave of the voice pronouncing a word in a sequence of bars physics that visibly organize the diagram of said sonority.

The works in this series require an extraordinary elaboration effort (I have seen one, and it is immaculately made), and I sincerely believe that they will have a long journey. Who would not like to have the voice that materializes our name in the air physically formed in space? Collectors are starting to queue for commissions.

The series in which the artist has been working have taken the form of cultural exchange (when she lived in Mexico, Brazil and the United States), the series of coins (in which they physically appear on the canvas as Dionysian protuberances), the series of lines that link distant points, and finally the one that includes holes as internal borders, horizons towards the interior of the work that open underlying worlds. What is characteristic of the work of Belén Posse de Rioboo, in addition to all that has been said, is the explosion of colours, often electric, with a predominance of both navy blue and light blue, non-aggressive red, ocher colors that level the palette and bring the work to the ground.

The large format is more inclined to his work, where the transparencies, the dripping areas, the overlapping of textures can be developed more widely. After a first exhibition in Madrid back in 1994, and many others in Brazil, Mexico and in various Spanish locations, Belén Posse de Rioboo works in her workshop in Palma a few months a year to fulfill the commitments that her dynamic web provides . Much success, then, in the new series and the new commissions.

Switzerland: Final end for GSM mobile communications at the beginning of 2023