Vincent Munier: “I feel much more like myself when I am in nature”

Seeing Vincent Munier (Épinal, France, 46 years old) on the terrace of a hotel in Plaza de Santa Ana, in the heart of Madrid, is something unusual. Despite it being June in the capital, the celebrated wildlife photographer is wearing corduroy pants and a shirt. An aspect that he collides with the hiking boots, the anorak and the wool hat that he usually wears on his trips to the bowels of Tibet. He has been going to the roof of the world since 2011 in search of the snow leopard, the feline that gives his name to his latest film. Co-directed with Marie Amiguet, it opens in Spanish cinemas on June 24. “I feel so much more authentic, more me, when I’m out in nature,” he says. He points to his clothes and adds: “You forget all this, all the superficial.”

“People tell me that I am a bit different in nature, that I behave like an animal,” he jokes. “I’m not very nice as a traveling companion because I don’t listen, I only see the flowers, the plants, the birds…” As he speaks, his eyes follow each bird that flies over the terrace. She points to one, a swift: “It’s a fascinating bird, it sleeps flying. They are champions,” he says admiringly, apologizing for being distracted.

Since he was a child, Munier has been perfecting his stalking techniques: the calm and care necessary to observe animals. He took the first photo of him when he was 12 years old. It was in the forest near his house, where he used to go camping with his father. A roe deer approached him: “I thought I was dreaming,” he recalls. He photographed it and at that moment “something suddenly changed in my life,” he says. Since then, he has only wanted to “share with others the love” he feels for wild animals. He has always done it behind a camera, first through photography and now with video.

“It’s hard for me to think that what I do is a job, because I’m rather driven by passion. In fact, that was what happened to the snow leopard. It’s not a professional project, it’s 10 years of travel where I never thought I’d make a movie,” she notes. In Snow Leopard, winner of the César Award for Best Documentary, Munier guides French writer Sylvain Tesson—and the viewer—on a journey to the heart of the Tibet highlands in search of this feline. For 92 minutes, the two men reflect on the loss of harmony in the world of the human being. “It’s a very simple, natural, personal film, and we were surprised by the echo it has had,” he admits. He says that it is clear that people feel good to see it, they have even told him that it is therapeutic: “For me that is the greatest compliment because it is the same thing I feel when I am on the field.” The snow leopard photographed by Vincent Munier during the expedition to Tibet with Sylvain Tesson.

Why the snow leopard? “Because I am fascinated by large predators”, whether it be a bear, a lion, or a wolf. “Where they are, everything is in order because they are like umbrella species, which allow a lot of other species to be around them. It’s magical”, he develops. “Furthermore, it is the animal that always sees you, watches you, but you never—or almost never—see it,” he continues. It is a feline that invites you to enter its game, that tempts those who are looking for it, he says. “But you have to be careful because you can’t focus on one flagship species. In the film the leopard is a pretext, it doesn’t take up more space than the other animals”, he explains. “Next to your house there are wonderful things too. The snow leopard is my way, yes, but I also feed on many things. You don’t have to go to the end of the world” to find beauty, he says.

“We all need moments of solitude”

Munier talks a lot about dreams, compliments and those that are yet to be realized. In his case, he dreams of being invisible, an ethereal being, so as not to bring with him the disorder so characteristic of human beings. “I always have the feeling that I annoy the animals, and I would like to always be camouflaged, hidden, and for the animal to forget that I am there. To be able to feed on that beauty of the wild world, that perfection,” he describes. In the animal world, he continues, “there is nothing superfluous. Quite the opposite of the world of the human being, where we are so superficial. We are the ones who bring chaos.”

“When you are a child you have many dreams and suddenly society catches them, takes them away from you,” he reflects. “We have to find a system that allows us to reach the end of our dreams, and that shows that happiness is not just consuming and having money.” He says that it is the key to combating “that crazy speed that leads us to crash into a wall” and thus restore the balance that humans have lost. 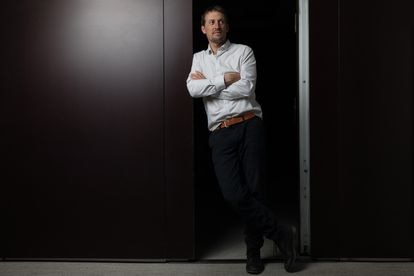 It can be said that Munier is an expert in the art of solitude. He not only looks for her during her trips to the quietest corners of the planet, but he also enjoys her at her estate in Vosges, in her native country. “My passion leads me to great moments of solitude, and it seems indispensable to me,” he says. “In society, in the city, you play a role, in a way. In reality you are a bit like the carbon copy of who is in front of you”, he observes. Within this mirage, he says, we lose the ability to enjoy the “simple fact of feeling.”

To rediscover it, he adds, “we all need those moments of solitude.” When his interpreter finishes translating this last sentence from French to Spanish, Munier repeats the word “loneliness”. He says that she reminds him of a song. “Do you know which one I mean?” she asks. She takes a few seconds, but with the help of the translator she finds the name: Sodade by the Cape Verdean singer Cesária Évora. She says it’s a great song, laughs, and apologizes again for the distraction.

Half of companies will raise prices in the next 12 months