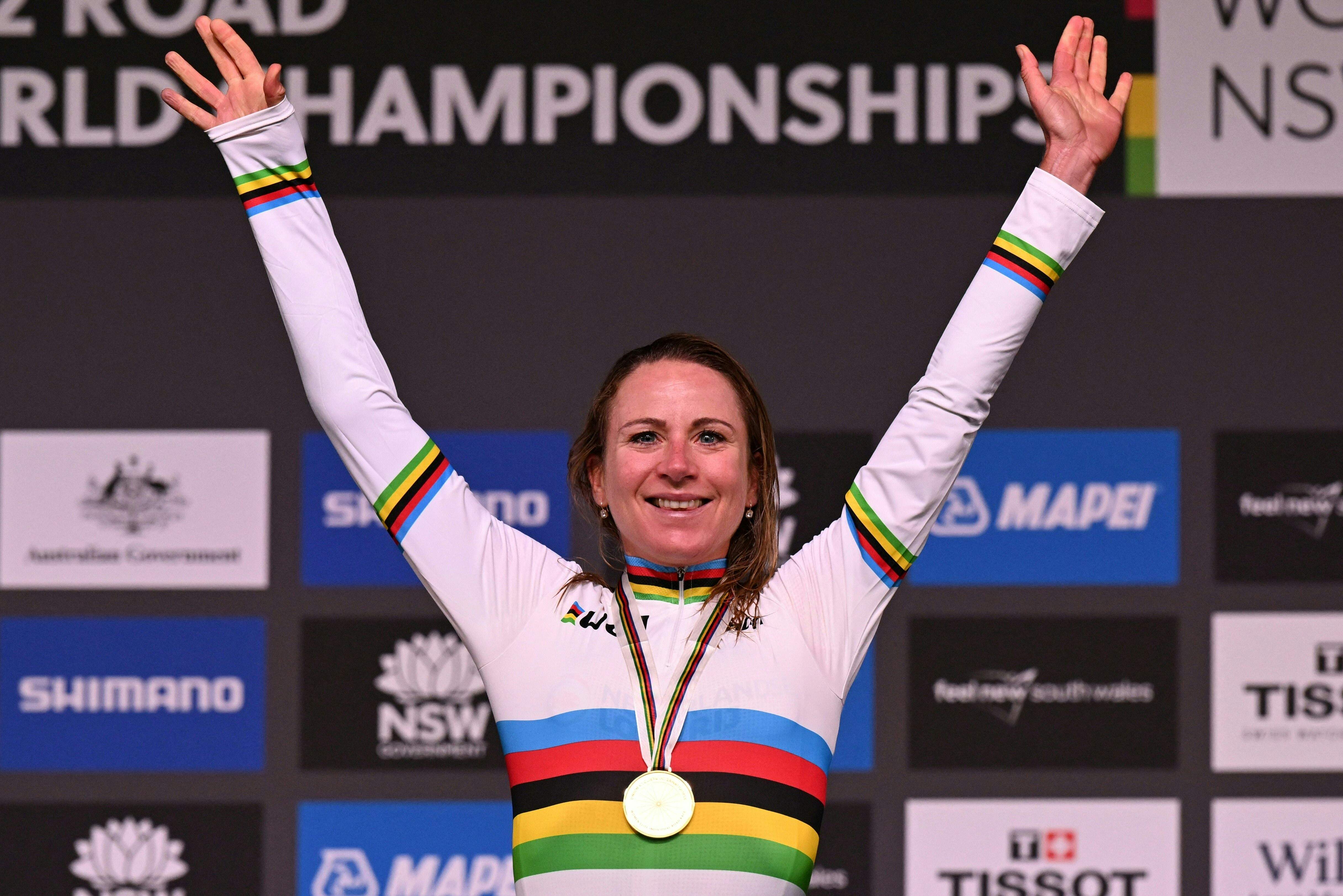 The Dutch Annemiek van Vleuten, injured in an elbow after a fall last Wednesday in the mixed relay event, has been proclaimed online world champion of the Road Cycling World Championships that are being held in Wollongong (Australia) after surprising the group of favorites in the last of the 164.3 kilometer route. It was an unexpected and epic ending for the Movistar rider, the great dominator of a 2022 season in which she adds the online world title to her triumphs in the Giro, the Tour and the Vuelta. All this in the year in which the Dutch woman turns 40. She will do it next October 8.

The podium of a race marked by rain, which at times got very bad, was completed by the Belgian Lotte Kopecky and the Italian Silvia Persico, the first of the group of 12 runners who entered a second behind Van Vleuten, both great favorite and surprising winner. Sixth was the Cuban Arlenis Sierra and the Balearic Mavi García, in whom the Spanish team had high hopes, she entered 25th in a second group of 13 runners who came 13 seconds behind the winner. Gipuzkoa Ane Santesteban was thirtieth.

Van Vleuten came to these world championships as the great favorite for the elite women’s events, but the seventh place in the time trial and, above all, the fall in the mixed relay race, in which she injured an elbow, made her lose options in the forecasts. Especially her downfall, which she made fear even because of her participation. In fact, given her problems and after being cut from the best in the last two climbs to the slope that marked each of the six laps of the final 17-kilometer circuit on which these world championships are being played, the champion worked harder for victory of his partner Marianne Vos, if the sprint was reached, than for his personal one. But as Vos’s group did not get to catch the main one, Van Vleuten, who had done nothing but look and look back almost off the hook in the small leading pack, accelerated after entering the last kilometer and no one could close that gap before Kopecky’s displeasure, the fastest, by far, in the sprint.

That surprising ending closed a race that can be summed up in that decisive moment and the last two climbs to the wall of Mount Pleasant (1,100 meters at 7.7 percent gradient and sections up to 17%), located 7 km. of goal. In both the same quintet was ahead, the one made up of the German Liane Lippert, one of the most aggressive in the climb, the Italian Elisa Longo Borghini, the Danish Cecilie Uttrup Ludwig, the Polish Katarzuna Niewiadoma, the one who unleashed the hostilities, and the local Ashleigh Moolman.

After the penultimate climb they were divided into a group of two (Lippert and Longo) and a group of three that was chasing (Ludwig, Niewiadoma and Moolman) and after the last one they all rode together. But on both occasions the same thing happened to them: they did not decide to continue their attacks and ended up absorbed. Which left everyone without a medal. Until these attacks, the Spanish options remained intact, but with the first one it was already seen that Mavi did not have the legs that would allow her to dream of everything, as she expected. With the second attack she was left out of any podium option because the second platoon in which she stayed, in which Vos was also, did not link with the head.

Stronger, or more skillful, was Arlenis Sierra, who, still without strength on the final slope to reach the medal, got into the group of eight that hunted down the leading quintet a kilometer from the finish line. That was the moment that Van Vleuten took advantage of to launch his unexpected and epic final attack that gave him his second World Cup gold, his 13th medal -six golds- in major championships and rounded off a perfect 2022 season, his 40th birthday.

Gamarra denounces the “discount week” to the criminals of Sánchez