Valencia revolutionizes its historic center with the pedestrianization of 30,000 square meters 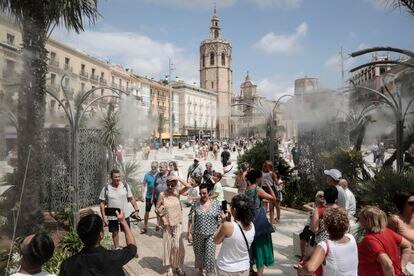 Visitors to the Plaza de la Reina in Valencia, in the vaporizer area, in an image captured last week.ANA ESCOBAR

The recent reopening of the Plaza de la Reina in Valencia shows the speed with which citizens conquer public space when freed from traffic. Where until last year municipal buses, taxis and cars circulated in search of parking, now crowds walk. The entrance to the cathedral and the popular Miguelete bell tower already has a worthy environment of 10,000 square meters paved with the same limestone that was used in part of the construction of the monuments. It is the latest performance of the pedestrian revolution that the historic center of the city is undergoing, which adds more than 30,000 square meters free of vehicles in just two years.

Since the fences of Plaza de la Reina were removed last week, after a complicated intervention due to the poor condition of the underground car park and due to the appearance of Roman and Visigoth remains, which it was finally decided to cover, it has become a new point of meeting. It can be checked any day, especially the scorching solo falls a little. The same has happened with the surroundings of the Lonja and the Central Market, whose works ended in June, and with the Plaza del Ayuntamiento, when it was definitively closed to private traffic and a large part of it was pedestrianized with deterrent urban planning measures. waiting to select the final project of the contest for its comprehensive reform.

So the three main squares of the historic center of Valencia, which articulate the axis from the modernist North Train Station to the Torres de Serrano, have become a new and enormous space for citizen use that especially enhances its heritage value. In this sense, the singular triangle that makes up the modernist Central Market, the Gothic Lonja (World Heritage Site) and the baroque (and eclectic) church of Santos Juanes stand out. There, in the old Market Square, the historic scene of public executions, the teacher Gaietà Ripoll was hanged in 1826, considered the last victim of the Holy Inquisition, although it was the Junta de la Fe created by the diocese of Valencia to succeed him the who condemned him as a heretic.

Today thousands of tourists and neighbors walk through a privileged environment, through which buses used to pass. The performance seems fully integrated into the life of the city, as does the intervention in Plaza de la Reina, although the controversy over trees and shadows still resonates. “You see, there are hardly any trees and no shadows either,” a woman commented to her partner last Thursday while she pointed to the center of the square.

The councilor and coordinator of the Sustainable Mobility and Public Space area, Giuseppe Grezzi, replies that there are now 115 trees when before there were 55. He assures that it is an artificial controversy that the use of space is already deactivating. However, the heat wave has only increased the demand of citizens, not only in Valencia, to have more trees and shade in cities that are not prepared for climate change and extreme temperatures. The design to remodel the Puerta del Sol, of similar dimensions to the Queen, has also received criticism in this regard.

José María Tomás, architect responsible for the Queen’s project, whose budget has risen to 13 million euros, emphasizes that the condition of maintaining the old underground car park marked the project and prevented the planting of large trees. The architect points out that it is a square, not a park or a garden. “The stone is the soul of the project, it accentuates the character of our city and provides stability and elegance”, he maintains. The poles that now support the awnings to provide shade in the center of the square will be dismantled in the fall to leave the space completely free and allocate it to all kinds of citizen activities. 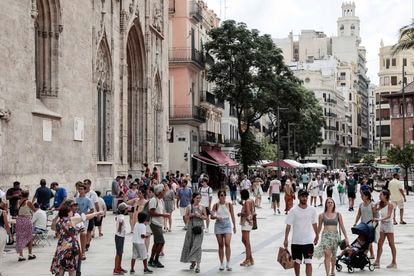 Redevelopment of the surroundings of the Lonja, on the left, and the Central Market. Anna Escobar

The progress of pedestrianization is inexorable, although reluctance persists among some merchants. Grezzi, from Compromís, a coalition that governs the City Council together with the PSPV-PSOE, recalls that the mobility plan of the previous consistory, chaired by Rita Barberá, from the PP, already contemplated the pedestrianization of the main squares whose remodeling projects in this line date back to the 19th century. “But they didn’t dare to do it. In two years, we have released more than 30,000 square meters”, she comments.

“Where cars used to pass and there was smoke and pollution, now pedestrians and school excursions pass,” says the Vice Mayor and Councilor for Urban Development, the socialist Sandra Gómez, politically responsible for the remodeling of the market environment, designed by Elisabet Quintana and Blanca Peñín and paid for (it cost about eight million euros) with funds from the Ministry of Territorial Policy, Public Works and Mobility.

Marisa Gallén, National Design Award winner and president of the Associació València Capital del Disseny, which is being held this year in the city, applauds “all the actions that take space away from the car in the city” and give it to pedestrians. But he considers that there is a lack of trees, when they are more necessary than ever, and criticizes the lack of interest in achieving the “visual comfort” of exemplary cities in many ways such as Copenhagen, in avoiding those lights that dazzle on the terraces, for example.

In the heat of the tree debate, the Vice Mayor and Councilor for Urban Ecology of Valencia, Sergi Campillo, made public last Thursday that the city’s Pla Verd i de la Biodiversitat reveals that 70.75% of residents have access to an area adapted to climate change no more than five minutes from your home, at a maximum of 350 meters. He also announced measures to increase “the green in various areas of the city, taking into account the situation of neighborhoods that were built without foreseeing the need to incorporate gardens or trees or others, as is the case of Ciutat Vella that present a deficit due to their idiosyncrasy and conservation requirements of the historic urban fabric”.

Keys about the new energy saving plan: Who does it affect? what measures does it include?