Joe Biden got up early this Sunday and left the White House with a broad smile. “I feel great,” he said as he headed to Marine One on his way to his beach house in Reboboth, Delaware. The antigen test had returned negative. The president of the United States abandoned isolation due to covid, but also saw his star law on track, which includes fiscal measures, measures against climate change and a reduction in the price of medicines. “I think it’s going to pass,” he said. So it has been. In a very tight vote, and after some last-minute tweaks, the Senate has given free rein to the law, which must now be voted on by the House of Representatives. It is an important asset for Biden just three months before his mid-term legislative elections.

The senators have spent the first weekend of August holed up in the Capitol. After a marathon session of amendments that lasted all Saturday night and into Sunday afternoon, the plenary session of the Upper House voted for the so-called Inflation Reduction Law, a name that responds more to a political strategy than to the content of the standard. Between yawns and sleepy faces, after nearly 30 hours of session, the vice president, Kamala Harris, has broken the tie of a Senate divided with 50 Republicans and 50 Democrats.

The rule, which aims to mobilize some 430,000 million dollars in 10 years and generate income of some 740,000 million, is far from the ambitions of Biden’s initial plan, the Build Back Better, of 3.5 billion. A watered-down version of the initial plan made it through the House of Representatives last November, but foundered in the Senate over rejection by West Virginia Democratic Sen. Joe Manchin.

Bernie Sanders, one of the most leftist senators of his party, has criticized in the debate on the new law that a large part of the measures of that plan have been left out, which extended the welfare state with free childcare, maternity leave and for patient care and other aid. Sanders has tabled his own amendments, but has been left alone, as even the Democrats who would be willing to support it are aware that they have gone as far as possible.

Democratic Majority Leader Charles Schumer secretly negotiated Manchin’s endorsement, which has caught Republicans by surprise. Schumer also made concessions to his party’s senator from Arizona, Kyrsten Sinema, another fractious Democrat who didn’t quite support him. Sinema has prevented the elimination of a tax loophole that favors hedge fund executives and venture capital firms. And at the last minute she has freed many companies controlled by those firms from the minimum corporate tax rate and has at times endangered the approval of the law. When another amendment to compensate for lost revenue has cleared the way, Schumer has been able to claim victory. “It has been a long, hard and winding road”, he has acknowledged. After the vote, he was exultant: “This law is going to change the United States for decades,” he proclaimed, perhaps somewhat exaggeratedly.

Previously, the so-called Senate parliamentarian, Elizabeth MacDonough, a kind of senior lawyer who watches over the procedures of the Upper House, had also removed the scissors and eliminated from the law the provision that prevented pharmaceutical companies from raising prices at a higher rate. to that of inflation. In her opinion, this norm did not fit into the fast track of budget reconciliation, the path used to approve the law and that requires a simple majority and not the 60 votes necessary to unblock an ordinary law. For that same reason, and due to the lack of Republican support to reach 60 votes, a limitation on the price of insulin has been left out of the law. 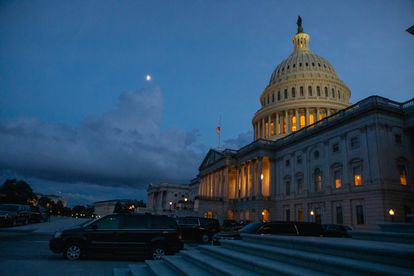 The United States Capitol, this Saturday evening, when the marathon debate on the Inflation Reduction Act began in the Senate. Anna Rose Layden (AFP)

Although lesser, the law is still a far-reaching reform that gives Biden some oxygen three months before the legislative elections that he was facing with his popularity on the floor.

The norm allows mobilizing record investments to face global warming. There are some 369,000 million dollars (about 362,300 million euros) in spending and tax incentives over 10 years to promote clean energy with the aim of reducing greenhouse gas emissions by 40% by 2030.

It is less than the 50% goal that Biden committed to, but it is a relief after the Supreme Court ruling that has undermined the power of the environmental agency to limit emissions and called into question the credibility of the United States in the fight. against climate change. The law, in any case, does not limit emissions, so its effect will depend on the prices of the different energy sources. If fossil fuels became cheaper, the energy transition would probably slow down.

The rule includes a tax reform for large companies. It establishes a minimum tax of 15% for companies that declare a profit of more than 1,000 million dollars in their accounts, but that use deductions, tax credits and other fiscal engineering maneuvers to reduce their tax rates and even avoid paying taxes on Benefits. Initially, the rule also applied that minimum rate to companies controlled by investment firms that individually did not exceed 1,000 million profits, but did so as a whole. However, Sinema and six other Democratic senators have supported a Republican amendment to stop it.

The other key aspect of the law is the reduction in the price of prescription drugs, especially for beneficiaries of Medicare, the public insurance for those over 65 years of age, mainly. The norm sets a limit by which Medicare beneficiaries cannot pay more than 2,000 dollars a year in drugs, which will especially favor those with chronic or very serious illnesses. Also, for the first time, Medicare will be able to negotiate drug prices directly with big pharmaceutical companies, which is expected to result in a discount. That, however, won’t apply to all drugs and won’t take effect until 2026, so the Reduce Inflation Act won’t help reduce inflation now, which is at its highest in four decades.

In need of good news, the president of the United States, Joe Biden, took only a few minutes to issue a statement celebrating the approval of the law by the Upper House. “Today, Senate Democrats sided with America’s families over special interests, voting to lower the cost of prescription drugs, health insurance, and everyday energy costs, and of reducing the deficit, while making the richest companies finally pay their fair share. I ran for president promising to get government back to work for working families, and that’s what this bill does. Spot”.
In his note, Biden summarizes the main points of the law, but also confronts the flank on which the Republicans are trying to attack him: the tax increase. “All this, [las medidas], is paid for by establishing a minimum corporate tax so that our richest companies start paying their fair share. It does not raise taxes on those who earn less than 400,000 dollars a year: not a penny, ”he says.

The carnival of 'the nobodys': the streets are flooded with parties before the arrival of Gustavo Petro