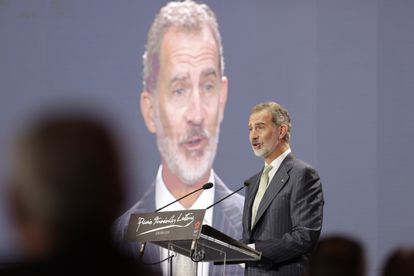 King Felipe intervenes in the delivery of the LXIV Fernández Latorre award, this Thursday at the Santiago Rey Fernández-Latorre Museum in Arteixo.Cabalar (EFE)

The accounts approved by the Government are a reflection of both its programmatic priorities and the guidelines set by Brussels in its deployment of European funds —in which the ecological transition and digitization have great weight. But the health and economic context are also noticeable: the latest Budgets of the legislature give a slight respite in spending on vaccines, which will be used to finance the fourth dose, but this grows if the 200 million delivered to the solidarity initiative are added Covax to deliver vials to developing countries. On the other hand, the item dedicated to unemployment falls due to the better behavior of the labor market, which for now has resisted the uncertainty due to the war and the Executive expects it to continue improving. And the public debt interest bill grows due to interest rate hikes by the European Central Bank. In the institutional aspect, the income of the main organizations increased, and the income of the King’s House remained unchanged. These are some of the priorities that the accounts collect.

More spending on science, digitization and transportation. Resources for R&D&I and digitization increased by 22.8% to 16,328 million euros, the highest amount ever recorded. This item was already a record last year, and now it is growing even more, increasing by more than 3,000 million, largely thanks to the fact that 46% of that money, 7,655 million euros, will come from the European funds of the Recovery Mechanism and Resilience. The pending issue in Spain is the execution rate, as highlighted a month ago by the Cotec Foundation, dedicated to promoting innovation as a driver of development. For its part, the budget of the Ministry of Science and Innovation is close to 4,000 million and improves 19.7% on that of 2022.

In an environment of high inflation and the search for energy savings, transport subsidies also multiplied: they went from 2,721 million to 3,419 million. Of this increase, the subsidies destined to support land transport grow by 655 million euros. This money is used to finance, among other actions, discounts on Renfe season tickets and multi-trip tickets.

The disbursement in youth and support for immigrants grows. Although the pension item already covers 39.2% of the Budget if European funds are included, the Government has highlighted that public resources for youth are also increasing. In 2023 they will reach the figure of 12,741 million euros, 13.25% more, according to their calculations. More than a third of that amount is spent on education policies, the most important, followed by unemployment and other benefits such as the minimum vital income. Likewise, the disbursement in actions in favor of immigrants increases by 31.6, to whose attention 180 million will be dedicated.

The budget of the Royal House, frozen. As happened last year, the annual allocation dedicated to the Head of State has once again been frozen. The Budgets include an expense of 8.43 million euros for the Casa del Rey. This contrasts with the increase in the resources of other State institutions: the Cortes Generales will receive 268 million (8.4% more), the Court of Auditors 78 million (an increase of 4.6%), the same as the Council General of the Judiciary (+3%). The Constitutional Court will receive 30 million (7.3% more), and the Council of State goes from 14 to almost 15 million. In total, the constitutional, government and other bodies will have 933 million more available, a growth of 18.3%. And the tax and financial administrations a total of 1,753 million, an advance of 0.4%.

Among the rest of the entities with state funding, the increase in the resources of the Higher Council for Scientific Research stands out, from 1,122 to 1,213 million; and the National Intelligence Center, from 322 million to 337 million. The Cervantes Institute will receive 167 million, six more. And the Prado Museum goes from 64 to 81 million. RTVE will have 47 million more (+10.5%).

More funds against depopulation. The Government calculates that it will dedicate, between the different ministries, 4,440 million to the fight against depopulation, the demographic challenge and territorial and social vulnerability. It foresees, among others, investments in digital connectivity and deployment of 5G, environmental transformation of sectors such as agri-food, fishing, tourism, urban rehabilitation and regeneration, development of the care economy or the protection of biodiversity and the restoration of ecosystems. The amount is higher than the 4,011 million in 2021 and the 4,358 million in 2022, whose guide is Plan 130, which brings together that number of measures to revitalize rural areas and small municipalities.