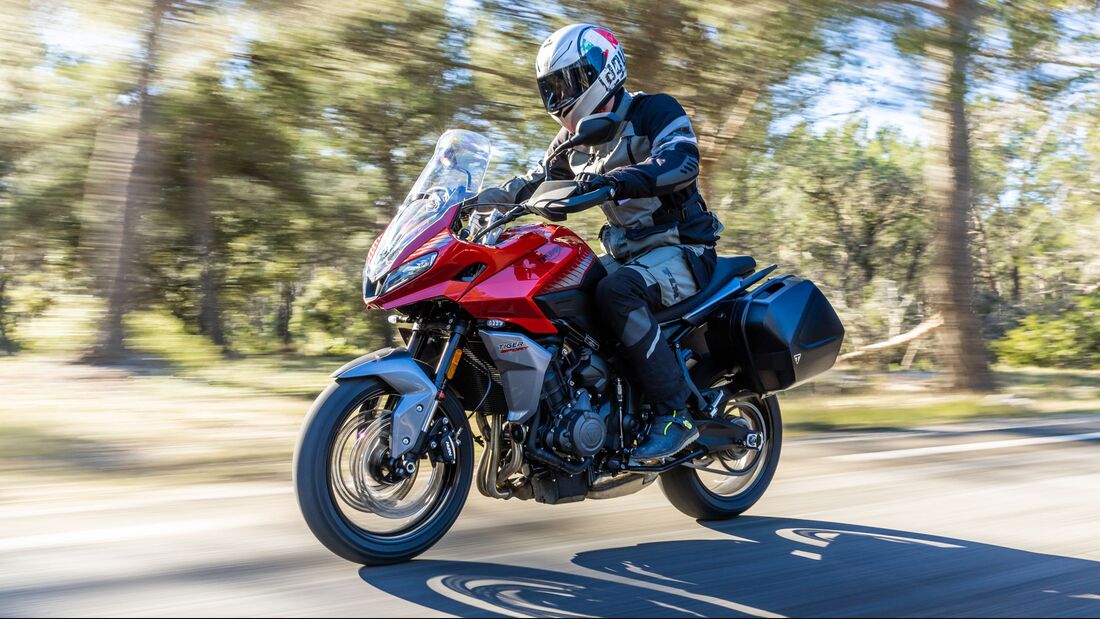 The domestic track cat presented here, also known as the Triumph Tiger Sport 660, has little to do with the well-known domestic cat, which according to the Duden definition is “a smaller animal with a slender body, a small round head, a long tail and soft fur that prefers to hunt mice”. mean. Well, this little animal also has a slim body, but that’s about it.

The Tiger Sport 660 isn’t kept in close quarters, it can travel hundreds of miles at a time, and it calls every paved road its home range. She also does not hunt rodents, but prefers two- and four-wheeled big game – and today especially the 1,000 possible points of the top test.

After the naked bike Trident, the Tiger Sport is the second model on Triumph’s 660 platform, which will be presented at the end of 2020. The Trident 660 immediately became the brand’s bestseller and found 1,296 new owners in Germany alone last year. In the test, it also collected 642 impressive points, but dropped a few points, as is usual in its class, especially in terms of touring suitability. As a crossover bike, the Tiger Sport 660 can promise advantages here. It follows the tried and tested Tiger principle of the British, providing a naked bike with high handlebars and a sporty half shell, defusing the ergonomics and thus forming a lively crossover bike.
The Tiger Sport 660 therefore takes the main frame and engine unchanged from the Trident. However, the (welded) rear frame has been lengthened somewhat in favor of pannier mounts and passenger suitability, and the spring travel has been increased to 150 millimeters at the front and rear. The Tiger Sport looks like it is leaning on the side stand with its long legs.
Because the optional (599 euros) cases are not yet mounted, the leg swings easily over the seat and the buttocks find a firm padding at a height of 835 millimeters. It is immediately noticeable that the Tiger Sport offers a lot of room to move, especially at the back there is plenty of space. The knees enclose a narrow tank, and the Tiger Sport extends the 810 millimeter wide (Trident: 770 millimeter), slightly cranked handlebars at a comfortable height to the rider. The arrangement as a whole: comfortable, upright, but still active.

Passenger comfort was also obviously part of the specification for the developers in Hinckley. The passenger sits high and the knee angle is wider compared to the Trident. Seat number two remains compact overall, but traveling for two with luggage is definitely possible with the Tiger Sport, especially with the large side cases (a helmet fits in each one). They don’t get in the way when you’re driving with two people, and before you set off on your journey with a full load, the spring strut’s preload can be easily adjusted to pillion mode using a hand wheel.

Traditionally, however, we begin the top test in solo mode. The Tiger Sport 660 proves that the basic tuning of the otherwise not further adjustable spring elements is particularly coherent for this with a lot of stability during brisk changes of direction. For a crossover, the fork and spring strut are tightly tuned, do not conduct any vibrations into the chassis when they are folded over, and respond so sensitively to bumps in the surface that comfort is not neglected. The feedback from the front is not on the level of a naked bike due to the high handlebars and long suspension travel, but it is enough to give a lot of confidence right from the start.
From the vertical, the Tiger Sport dives handily on command, initially appearing as a curve robber. In a medium lean position, the Michelin Road 5 standard tire then resists noticeably, especially at low temperatures, and would rather put the motorcycle up again. Braking reinforces this urge.
On the other hand, if you use your body to angle the bike even further, you’ll change your mind, and very low down (the lean angle is plentiful) you’ll want to tip it back onto the notch. After all, as the temperature rises, the Tiger Sport continues to shed the urge to stand up, but not completely. Next stop: mogul slope. The spring elements cut a fine figure here. The fork makes full use of its travel when braking over rough warps. Even when riding with two people, the spring strut only rushes hard when fully pretensioned in extreme cases. However, due to little rebound damping, it sends the pillion passenger upwards with momentum when rebounding via the long rear frame lever.

The powerful and very flexible motor doesn’t care whether you’re alone or in pairs. Basically it comes from the Daytona 675 and with 67 new parts it became a 660 all-rounder. During a cold start, it sometimes needs a second attempt to start and then heats up for a few seconds at increased speed. The smooth-running clutch engages finely and smoothly via the non-adjustable lever. Fine, on to the pull measurements! From 3,000 rpm, the Triple pushes the Tiger Sport forward with more than 55 Newton meters of torque and revs happily – albeit with noticeable vibration in the upper third – up to the five-digit range.
The home stretch cat combines the best of a predator and a house tiger, likes high revs just as much as cruising at low revs in sixth gear. For its displacement class, the engine burns strong torque values ​​in the test asphalt, even if it managed this a bit better in the Trident, which according to the scales is 15 kilograms lighter. The throttle response, which is delayed by a few milliseconds, doesn’t matter, but you have to get used to it when you put it on at the apex of a curve. The Tiger Sport 660 switches from overrun to the acceleration phase without any noticeable load change reactions from the drive train.

For a surcharge of 259 euros, the next higher or lower gear can then be engaged without a clutch thanks to the automatic gearshift with blipper function. A good investment, because the gears engage precisely in both directions, the blipper also works under load and doses the double-declutching well at all speeds. Like almost all of the electronics, it works at a very high level. The two riding modes “Road” and “Rain” can be switched while riding using the simple but functional switch unit on the left-hand side of the handlebar. In Rain mode, the Tiger Sport only releases power very tentatively, like a house cat, and the traction control intervenes early. Road, on the other hand, means tiger mode, because you only need a slight turn of the handle for a lot of propulsion. Then the traction control from tight corners also allows harder, but not really hard acceleration.
The rear tire could transmit significantly more power than the electronics give it credit for. Sports drivers should therefore turn off the traction control if they want to go really fast. This is not possible with ABS, which is also tuned to be safety-oriented. It intervenes early under hard deceleration and reliably keeps the rear wheel on or near the ground. The anti-hopping clutch, which is not common in this class, also contributes to the excellent braking stability of the Tiger Sport.
Because of the rough control intervals of the ABS, the bike needs a total of 46.7 meters to come to a standstill from 100 km/h. The Nissin two-piston floating calipers are not to blame, they grip powerfully and easily within the control range. Even under extreme loads after many emergency stops, they do not give way.

The Tiger Sport 660 is frugal at the pump. Relaxed and moving, 4.5 liters of premium petrol are enough for 100 kilometers. That’s only 0.1 liters more than the lighter Trident 660 swallows. At 130 km / h, both approve 1.3 liters extra. With a 17-liter tank (Trident: 14 liters), the Tiger Sport collects a few extra points for the generous 382-kilometer range. It not only invites you to long stages with the aforementioned touring-suitable ergonomics, but also with top wind protection. The high disc can be easily adjusted while driving.
On the test motorcycle, useful accessories such as the powerful heated grips (239 euros) and the hand protectors (119 euros) are also convincing. And if the Tiger Sport 660 has to travel long into the dark, its night vision cat’s eyes will help. The right (dipped beam) illuminates the road sufficiently, the left (high beam) turns night into day far away. On the other hand, the “on-board tool kit” is not at all suitable for touring. Consisting only of an Allen-Phillips combination key, it would not even be possible to re-tighten a mirror that had been shaken loose. However, this was not necessary during the test procedure, the Tiger Sport presents itself as high-quality and with top workmanship. Surface finish and material quality are undoubtedly hard to top in the crossover mid-range.

Initial question answered: both. The Tiger Sport 660 unites a cat of prey and a house tiger. Successful ergonomics, a lively engine and a harmonious chassis invite you to go for a quick lap as well as a longer tour. Well thought-out details such as window adjustment and case mounts round off the all-round package. With rough ABS and not quite neutral cornering behavior, the Tiger also leaves some room for improvement.

Free returns on the internet are coming to an end