Tour to the highest peaks of the 7 Alpine countries: peaks of pleasure 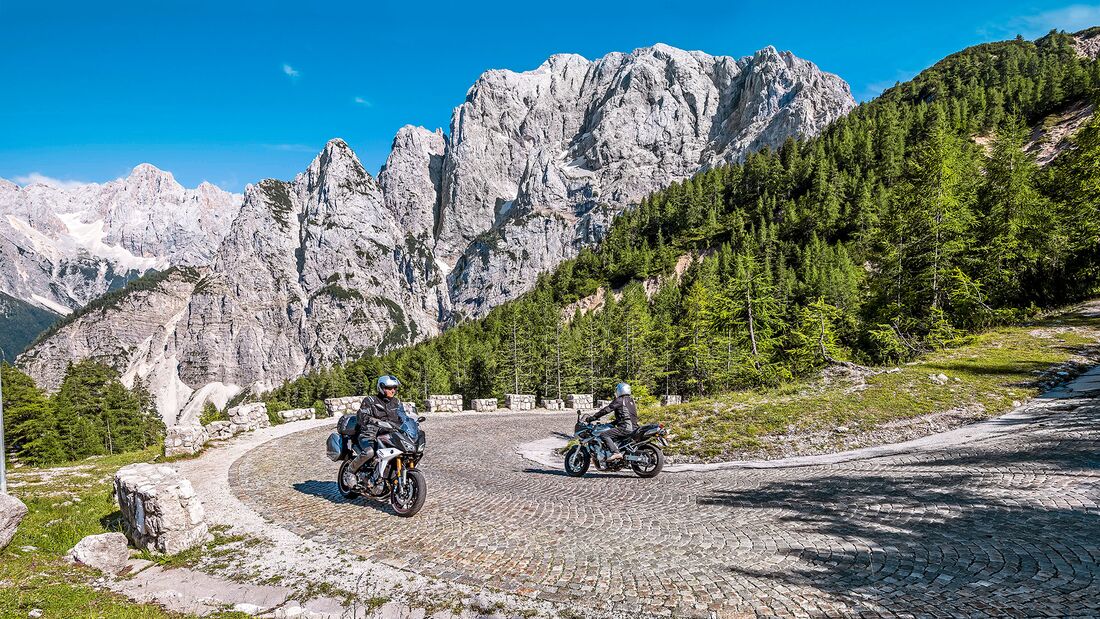 Rainer is a two-thousander, with a proud 2,000 millimeters one of the tallest. An adequate travel destination would of course be the highest peaks of the seven Alpine countries. It doesn’t have to be complete mountaineering equipment, a Yamaha Tracer 900 will do, too. Even quite excellent.

A long freeway through Switzerland, and then fire free on the phenomenal pass road over the Col de la Forclaz, because “thanks to its clear course, it allows rapid progress”, as the Alpine guide Denzel so nicely puts it. Through Chamonix and Les Houches to the junction up to Merlet, an animal park with a view of Mont Blanc. Which is by no means a matter of course because of the crowded flora and true cloud mountains. Because the highest mountain in France at 4,810 meters is often quite shy of the media. The view from the tunnel under the White Mountain is even more sparse, which we use after a comfortable night in the Chalet-Hôtel Les Campanules to save as much time as possible via Aosta to our next destination.

Yes, time is money, and so we almost feel like the Japanese doing “the Alps in four days”. So: next summit. In Italy it is the 4,061 meter high Gran Paradiso. Approaching from the traffic jam-prone Aosta Valley on an asphalt roller coaster up to the high valley of Valsavarenche. No through traffic, at best the tracers go through the horses when they show in the serpentines near Imrod that they can trekk at low speed, but also love to act as racers. What does it matter that we only see the Gran Paradiso on a postcard, bought at a kiosk at the end of this valley. Back to Aosta, flowing over the grandiose Col du Grand-Saint-Bernard, dry spell between Martigny and Visp to the next top summit in Switzerland.

The Dufourspitze measures 4,634 meters, 156 more than the Matterhorn. For the night, so to speak, on the bedside rug of the top mountain, we end up in Saas-Grund, with Mira and her “Schönblick” guesthouse. Vacation like 30 years ago. The dining room a former disco, the rooms without frills and frills. But directly in front of the window is the Mischabel, a mountain massif whose main peak, the Dom, at 4,545 meters is the highest mountain whose base is entirely in Switzerland. The Dufourspitze, on the other hand, already has one leg in Italy.

Thursday morning, at six o’clock, the cathedral is already glowing reddish-brown under an azure sky. What’s the point of national or local sophistication, along the lines of: Ätsch, the mountain is all ours. What counts is the way to the top. And from the “Schönblick” to the end of the valley at the Mattmark reservoir, it is relaxed and hairpin bends at the same time, regardless of whether you can identify the Dufourspitze somewhere. Incidentally, instead of postcards from the Swiss Summit, there are only some from the cathedral in Saas-Grund. After all, who would ask for souvenirs from Schalke 04 in Dortmund?

Tired of passes team with switchbacks

Speaking of football wisdom: the team is the star. Similarly, in the following stage, it is the passing team, not just one outstanding player, that guarantees success. To warm up through the wide valley of the Rhone, past ancient wooden houses that stand like spectators on the green edge of the field, before the serpentines of the Grimsel Pass tower up in Gletsch, as if it were a monster lasagne – which we won’t plaster today, because we are turning right to the Panning Furka, also a first division pass road. There are plenty of switchbacks there, which, logo, makes the 28 kilometers a magnet for motorcyclists of all stripes, from the experienced to the greenhorn. “Some almost fall off their bikes when they say hello,” comments Rainer. And admits after the next classic, the Klausen Pass: “In the first section I rode more along the left side of the rock face than right along the abyss, the thin poles securing the edge look like toothpicks.”

Where is the Vordere Grauspitze hiding, the highest mountain in Liechtenstein at 2599 meters? After all, in the tiny principality, in addition to castles and financial constructs, there is also room for a curve worm, the route from Triesen to Malbun. And we’re now on the lookout for the tip we’re looking for. Vain. But again a decent injection of adrenaline, in which a briskly driving Subaru Impreza is not entirely uninvolved. On the descent into the bustling Rhine Valley, now well informed, a fleeting glimpse of the Grauspitze. Vaduz, Feldkirch, Bludenz: Close your eyes and through. A game lasts 90 minutes, so sometimes you have to wait patiently for the next goal.

Continue to Stuben, where we meet the 3rd Arlberg Automobile Racing Slalom, in the starting field crass boxes from the silent film era. Resting at the Flexenpass, holidaymakers flooding in Zürs and Lech, meandering streets to Warth, through the Lech Valley to the junction into the Namloser Tal – which presents itself as an endlessly awesome band of artfully linked curves. And finally a pit stop in Berwang on the terrace of the “Mirabell” restaurant-café with an apple strudel kick and a view of the Zugspitze.

Shall we take the gondola to Germany’s highest peak, 2962 meters high? From the Eibsee near Garmisch-Partenkirchen or alternatively with the Tiroler Zugspitzbahn from Ehrwald? 46.50 euros each for ascent and descent would have to be shelled out. No, I’d rather continue zapping straight away. Sorry, Top of Germany, but there are still a good 220 kilometers to the Großglockner. Via Vorderriß, Achensee and Gerlospass – whose hairpin bends are always great fun – we make it at least to Mittersill in Oberpinzgau.

And what does the Großglockner High Alpine Road have up its sleeve for a toll of 26 euros? Well, an engineering masterpiece, materialized by laborers into a total work of art made up of 48 kilometers and 36 hairpin bends. Culminating point: the Edelweißspitze with its legendary cobblestone passage, a lookout tower and the almost above-ground accommodation option in the Edelweißhütte at 2,572 meters. In comparison, the Kaiser-Franz-Josefs-Höhe turns out to be a fairground with a huge multi-storey car park like in a shopping center. The goods: view of the 3,798 meter high Großglockner, Austria’s summit. And on the Pasterze, formerly eternal ice, where you can watch the glacier slowly dying. Which proves that climate change is no joke. Eleven fifty-five?

Four and a half hours later the seventh summit, the 2,864 meter high Triglav in Slovenia. The low-traffic Nassfeld Pass with its two “faces” is long behind us: on the north ramp, clear asphalt for curve weaving, on the south side, scarred terrain and pothole slalom as well as a tunnel with a narrow, sloping hairpin bend. So now scan the landscape one last time in search of the summit. Well, not so easy for mountain philistines to locate the “three heads”. Regardless, the steep Škrlatica Wall and other jagged tongue twisters along the Vršič Pass, paved with 49 hairpin bends and some cobblestones, through Triglav National Park are certainly attractive alternatives. And so we simply complete our summit collection with one more postcard.

travel time: Due to snow-related winter closures, a number of Alpine passes are often only passable from June to October.

Mont Blanc/France: Not far from Chamonix is ​​the quiet Chalet-Hôtel Les CampanulesGran Paradiso/Italy: Huts and apartments on the Pont BreuilDufourspitze campsite/Switzerland: Schönblick guesthouse in Saas-GrundVordere Grauspitze/Liechtenstein: The family hotel can be reached via a winding mountain route Turna Malbun in Triesenberg-Zugspitze/Germany: At the foot of the mountain is the Eibsee Hotel, alternatively – even if it is much closer to the Namloser Tal than to the Zugspitze – there is the Zugspitzblick guest house in Austria in Berwang-Großglockner/Austria: Surrounded by 37 three-thousanders, you spend the night at the highest exclusively in the Edelweißhütte in Fusch on the Großglocknerstraße Triglav/Slovenia: at the northern entrance to the Vršič Pass, the Pension and Restaurant Milka in Kranjska Gora

Traveling with a tent: Some recommended campsites are located directly on the route described in this travel story: Hobo Camping in Val Veny, Camping Schönblick in Saas-Grund, Camping Pont Breuil in Valsavarenche, Zugspitz Resort on the Austrian side of Germany’s highest mountain, National Park Camping Großglockner on the High Alpine Road, Camping Trenta Sergej Bolčina, south of the Vršič pass and directly on the mountain river Isonzo.

Summit Excursions: Among the four-thousanders of the Seven Alpen-Summits, the Gran Paradiso in Italy is probably the easiest mountain to conquer with your own muscle power. Ascent from Rifugio Vittorio Emanuele II, reachable via Pont at the end of Valsavarenche.

For the more comfortable among mountain tourists: The cable car to the 3,842 meter high Aiguille du Midi floats from Chamonix up into the white world of Mont Blanc; for the Zugspitze there are three comfortable alternatives, from the Eibsee near Garmisch-Partenkirchen both cable car and rack railway, from Ehrwald the Tyrolean Zugspitzbahn.