The sun rises in Vallecas and the three ticket offices that have an entire neighborhood on edge open. It’s nine in the morning, but there are people who have been waiting since six or seven. A queue of just over a hundred people waits to purchase their Rayo Vallecano season ticket, the most precious and most difficult object to obtain these days in the southern neighborhood of Madrid. As the hours go by, the queue, rather than advancing, grows until it turns around Calle del Arroyo del Olivar. Several of those who try to get the valuable card this Tuesday are serving their fourth day of forced penance under the summer sun. “I had never seen anything like this in my life,” says Paco Pérez, councilor for Más Madrid in the Madrid City Council and Rayo Vallecano fan. “We have felt abused. This situation is anachronistic and inappropriate for a First Division club”, claims this lucky man who only had to queue for eight hours. 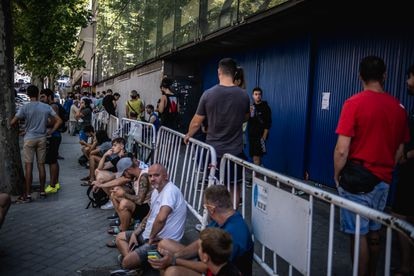 Rayo Vallecano fans this Tuesday at the gates of the Vallecas Stadium.ALEX ONCIU

At the beginning of August, Rayo began with the subscription renewal campaign until last season. This delay, just a few days before the competition began, is due, as explained by the club, to the works in a part of the stadium, which had paralyzed the sale of seats until they were finished at the end of July. The procedures for the renewal can be carried out online, but it is necessary to go to the stadium to collect the card.

However, the problem is in the new subscriptions, about 2,500 of the almost 12,000 that the club has, and for which the online registration option has not been implemented. According to the club, this measure seeks not to discriminate against those people who do not have access to the internet. In addition, the registration process for this group opened last Friday, with the league already underway, and has to be done at the three ticket offices set up at the Vallecas Stadium. At a rate of between 600 and 700 registrations per day, they are not able to supply all the demand, much higher than what they expected in the club.

This Tuesday, the situation was much more relaxed than during the weekend, when the police even came to put order. In the last meters before reaching the door that gives access to the desired lockers, a kind of walk of fame appears painted on the cobblestones of the floor. In it are written the names and timestamps of those fans who spent the night out in the open to get their subscription. Borja Sanz, a 19-year-old student, smiles when he sees his signature next to 30-2 = 28. “They deducted two hours because I went home to take a shower,” he recalls with a laugh, pointing to the cobblestone next to where the name of a friend of his who reached 33 hours appears. “He held out, but you can’t imagine how he smelled,” he jokes.

Sanz returned to the row in which he was from 10 am on Saturday until 4 pm on Sunday. He remembers the lady who offered him an omelet sandwich, the letters with his companions in line to hang out at night, and the songs of the people to liven up the wait. “Without the good vibes that had been there, it would have been impossible,” he explains. “The first day I was only a few meters away when the windows closed. After all day there I wasn’t going to leave and we decided to spend the night even though we didn’t have chairs or anything like that. I didn’t sleep at all but I had a lot of fun with the people. The next day it took us about six hours to advance the remaining 100 meters to the ticket office”. 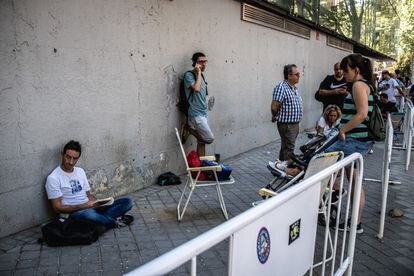 Rayo Vallecano fans line up this Tuesday to collect the season tickets.ALEX ONCIU

Sanz’s mistake was not coming prepared for war. This Tuesday, the panorama is very different from the one experienced over the weekend. Everyone who comes to the queue arrives well equipped with a beach chair and a bag with food and drink. Coming in a group is essential, since relays are essential to be able to cope with the hours of waiting. Some, like a married couple waiting at the end of the line, have learned from the experience of the other days. “This is our third attempt and it seems that now it is,” the woman confides. Her husband explains that they spent all Saturday in line, returned on Sunday, and having no success, they decided to wait until Tuesday to see if the situation was channeled. After five hours, only a dozen people stand between them and the long-awaited card.

The club recognizes its miscalculation when managing a demand that they did not expect so high. Last season they were not able to sell all the tickets, but this year they are convinced that they will end up hanging the sign that there are no tickets. The players showed solidarity over the weekend and posted their support on social media for the fans who waited forever at the gates of the stadium. “Despite the difficulties, you always respond”, commented Óscar Trejo, Rayo playmaker. However, fans are tired of so much difficulty.

Colau doesn’t keep away from the get together of Spain in Barcelona: full home to see the choice

Media homes demand that the USA chorus from prosecuting Assange

Prison for the driver who killed two Rubí cyclists: he was driving without a license, speeding and drugged, according to the investigation