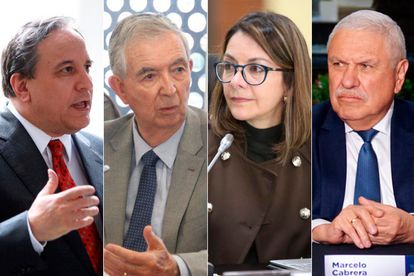 The great political crisis that was about to take down President Guillermo Lasso in Ecuador continues to have repercussions. In the last few hours, three ministers and a senior official have resigned. Lasso, who signed a pact a few days ago to end the indigenous protests that lasted 18 days due to inflation and the government’s oil and mining agenda, is forced to reform his cabinet at a critical moment.

The heads of Health, Transport and Finance, holders of the key portfolios, have left and Lasso must now find replacements for them. They are joined by the Secretary of Higher Education. Although the protests have stopped over the deal, stability is precarious. The organizations that took to the streets have given themselves a period of 90 days to check if the promises are being fulfilled. The government promised to change several laws, but what has finally brought peace to Ecuador is the official commitment that the public coffers will assume the cost of 15 cents per gallon of the three most consumed gasolines.

The resignations have a reason. The Secretary of Education falls because face-to-face classes have not recovered after the pandemic, there is not enough budget or for desks. Health doesn’t work any better either: hospital professionals complain that there are no medicines, no alcohol, no cotton, no suture thread. The workers themselves asked that the health system be declared in a state of emergency. And finance, the one in charge of endowing the budgets, has been totally ineffective. These are the three areas that have given Lasso the most headaches. It is no coincidence that the attempt to change course begins here.

Among Lasso’s promises, the repeal of decree 95 stands out, which allowed receiving private investment in the state’s oil activities and to reform decree 151 on mining. In this regard, he responded to the demand that a popular consultation always be held before starting mining activity in the surrounding towns and to restrict this type of resource exploitation in protected areas, ancestral territories and in spaces considered to be water sources. In addition, he agreed to deactivate the last state of emergency declared in four provinces neighboring Quito one day before the peace, precisely because of the lack of expectation that there was a few hours ago of reaching an agreement.

The social conflict was stalled after a first attempt at dialogue and Ecuador remained paralyzed, tense and with an increasingly evident social division after almost three weeks of marches, roadblocks and clashes with the security forces. The government gave in on one of the most controversial points, that of gasoline, but not enough compared to what the indigenous organizations were asking for. The protest was aimed at subsidizing 40 cents of a dollar for each gallon of diesel, extra and ecopaís – gasoline for popular use and transportation – sold to the consumer. Lasso had only agreed by decree that the State assume 10 cents of what the consumer pays, allocating 266 million dollars a year to the subsidy.

Lasso’s challenge now is to stabilize the situation of his government, which has stood up to the challenge in the streets. The president came to save a vote in the Assembly on his dismissal, when he has only been in office for a year. He has suffered a social explosion that has shocked the population, as has happened in other countries in the region, such as Colombia and Chile. The protests boycotted the productive activity of the country and shocked the population due to the virulence of the demonstrations in Quito and on its access roads. Goods and provisions could not get from the Andean zone, where roadblocks were installed, to the coastal provinces. Ecuador was paralyzed. Lasso saved this match ball, but the threat of discontent remains.