Between chickens, cows and toys, the three cooks work the drug that arrived at the farm every day in industrial quantities. Up to 120 kilos per week hidden in bags of cement. This is how the days passed, surrounded by oaks and animals, the three experts in cocaine treatment brought especially from Colombia to Navalagamella, a small town in the mountains of Madrid. Until on September 6, everything fell apart, when a large group of the elite team of the National Police, the GEO, spread out on the immense land and disrupted the business. Body specialists in this type of laboratory had never seen such a structure in Spanish territory, more similar to those found in the jungle.

“We don’t know if it’s because the house was small or the reason they set everything up outdoors, but it’s not what we normally find,” explains a member of the operation who entered the farm that day after months of research. At the time the network was dismantled, 85 kilos of cocaine base paste, 250 kilograms of cement impregnated with this drug, 950 liters of chemical precursors, six vehicles and 36,000 euros were seized. In this case, the initial plan was to establish the laboratory in a chalet in Coín (Málaga), a way of proceeding that is more similar to what specialized agents have previously seen in this type of organization: in a large closed space .

It not only resembled the laboratories across the Atlantic in structure, but also in the method of treating the coca. “While on other occasions they make use of many chemical elements that are subject to controls at the time of purchase, this time they only used gasoline, ammonia and water, which shows the great knowledge they had of the technique,” adds this agent. . These products were hidden in a warehouse in Córdoba, which they moved to Madrid when they ran out.

At one point of the farm, of a considerable extension, there was a small wooden cabin in which the three cooks were crowded, as the experts in preparing cocaine for sale are known, a kind of foreman and another member of the organization. The property belongs to the sister of one of the members of the criminal network. In the operation, 12 people have been arrested, including the ringleader, a Spaniard living on the Costa del Sol, whom the police usually saw moving around in high-end cars. “Up to five or six luxury vehicles,” concludes the police officer participating in the investigation. 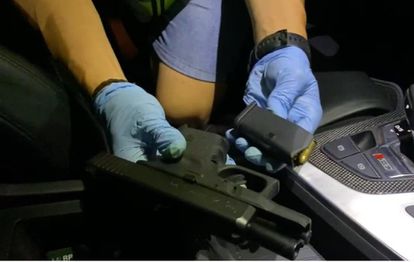 Pistol found in the car of the head of a drug trafficking network that had a laboratory on a farm in Madrid. National Police

In one of those cars, the police found a pistol that the leader of the gang was carrying to defend himself against possible enemies. He is a 40-year-old criminal, an old acquaintance of the police because of his relationship with other drug trafficking operations. “He had been related to the Queen of Coca [Ana María Cameno]”, indicates this police officer who has closely followed the steps of the dismantled organization.

From the province of Malaga, delegations usually left with the drug that they later dealt with in this Madrid municipality near El Escorial. “The vans in which the cement blocks were loaded were closely guarded and a shuttle car was always at the head of the procession to warn of possible surprises,” says the police officer. The area in which the cocaine was processed was covered by tarps and umbrellas placed in an anarchic manner, to avoid possible surveillance from the sky. In fact, they were the ones who exercised aerial surveillance, thanks to a drone that flew over the immensity of the farm constantly. There were also members of security at the ends of the field with transmitters to communicate with each other.

In addition to the animals that lived in the field, the agents found toys belonging to the children of the family that owns the land, as well as other personal objects. All of them impregnated with the strong smell of gasoline that the drums gave off. “The cooks arrived on three independent flights from Colombia to raise less suspicion. Many times, once they land, they cover their eyes and they don’t even know where they have been taken”, indicates the agent who has participated in the operation. This time, they couldn’t close their eyes to the unexpected arrival of the GEOs among a bunch of chickens.

Seven table lamps, beautiful, stylish and available at Ikea, for every corner of the house