This is how our perception of time influences mental health 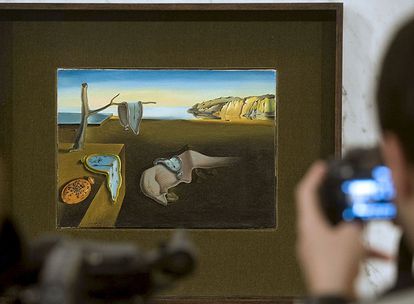 ‘The persistence of memory’, in the image, by Salvador Dalí in the Figueres museum. EFE

To Ramón Bayés, pioneer of scientific psychology in Spain

Living pending time is one of the main sources of stress. Knowing how to control and manage it is, on the contrary, a source of somatic and mental health, but this requires, in the first place, clearly differentiating two types of time and their properties, the one marked by the clocks, that is, the objective time, and the one we mentally perceive in each state or situation, since they do not always coincide.

Humans have a group of neurons in the brain, the suprachiasmatic nucleus of the hypothalamus, which works like a biological clock with a 24-hour cycle that serves to adjust the functioning of the body, its physiology, to external changes. They are neurons that function quite autonomously, preparing the brain and other organs of the body to function differently, depending on whether it is day or night. In this way, they synchronize our rhythms of sleep and wakefulness, body temperature and the production of certain hormones with the daily cycle of solar light and darkness, which allows a better functioning of physiological functions and better bodily health.

In reality, this hypothalamic clock is an imperfect clock, since it is slow, but each day environmental stimuli such as the light of the morning sun or things that also tend to occur at almost the same time, such as the noise of the delivery truck, help to set it on time. the garbage, the neighbor’s shower or the alarm clock itself. Morning light has a special power for this function, as it reaches the hypothalamus through direct nerve pathways that reach it from the retina of the eyes.

But the sense we have of the passage of time, its mental or subjective perception, does not always coincide with what the clocks say. Together with memory, this sense contributes so that, instead of living in a kind of eternal present, we have a notion of the past, the present and the future. Thanks to it we appreciate the speed of anything that moves and the size of an object when we explore it by touch. Prosody, the tone of voice that carries the true message of the words, also requires a subjective perception of time, which we also use to pay attention to things that happen, try to solve problems, make decisions, make plans for the future. or even to understand the minds and behavior of other people.

We are trained to distinguish very well what happened years or days ago from what happened a while ago or has just happened and we can distinguish minutes from seconds and these from milliseconds, that is, we can make assessments, albeit imprecise, of the objective time. But our subjective time perception capacity varies considerably depending on the senses involved in it. Thus, we tend to evaluate the duration of a sound more precisely than that of a visual image or that of a smell, which has much to do with the fact that the human auditory sense, and probably that of many animal species, is, by its nature and functions, the most specialized and with the greatest ability to perceive time. However, the evaluation of the elapsed time, for example, during a melody, is always more precise when we use more than one sense at the same time, so seeing the musician who interprets it allows us a better evaluation than if we only heard him.

In the search for some kind of brain biological clock that measures subjective time, the greatest success so far has been the team of the married couple May-Britt Moser and Edvard Moser, from the Institute for Systems Neuroscience and Center for Neural Computation in Norway, winners of the Nobel Prize in Physiology and Medicine for his findings on cells of the hippocampus of rats that signal the position that animals occupy in a certain space (see Okeef, the Nobel Prize winner and the cerebral “GPS”, in El País on October 26, 2014). These researchers, in collaboration with those from several North American universities, observed that the hippocampus itself also contains neurons that, after repeated learning sequences, end up signaling with their activity the moment when the animals sense that something relevant is going to happen, which, Together, they interpret that the hippocampus is capable of storing in its neurons a complex memory of what, where and when things important to the rat have to happen.

It is possible that our human hippocampus also contains a representation of this type, and that its intuitive character is the reason why our subjective perception of time is as variable as it is influenced by multiple factors, external and internal, that can also converge in the hippocampus. . Thus, sometimes we would like time to pass quickly and other times to go on forever, but that, far from our will, depends on other factors that are not always easy to control.

Time flies when we are busy and motivated and when we like what we do and have a good time, but it takes longer when we are waiting impatiently, we are in pain, we are sick or we are having a bad time. We also feel it running very slowly when we are tired and uncomfortable, when we are bored, when we carry a heavy load or when we feel in danger. Likewise, it takes us forever when we are excited waiting for a loved one or important news about health or finances. The rush also makes us have the impression that the bus took half an hour when, in reality, it only took ten minutes, or that the red light takes forever.

Knowing all these factors and their influence is very important, as Professor Ramón Bayés (The emotional clock. Alienta Ed. 2007) has brilliantly explained, to manage internal time, which we appreciate subjectively. This management is what helps us in each circumstance to adjust as far as possible the time mentally perceived to the real time elapsed, preventing the non-coincidence from becoming, as it happens so many times to us, a source of stress. In general, good advice to ensure somatic and mental health is not to live too closely with time, but that only happens when we have the feeling that we control it, even if it is not entirely true.

Gray matter is a space that tries to explain, in an accessible way, how the brain creates the mind and controls behavior. The senses, motivations and feelings, sleep, learning and memory, language and consciousness, as well as their main disorders, will be analyzed in the conviction that knowing how they work is equivalent to knowing ourselves better and increasing our well-being and relationships with other people.

Electoral violence in Kenya: in the face of insecurity, the surveillance of the people