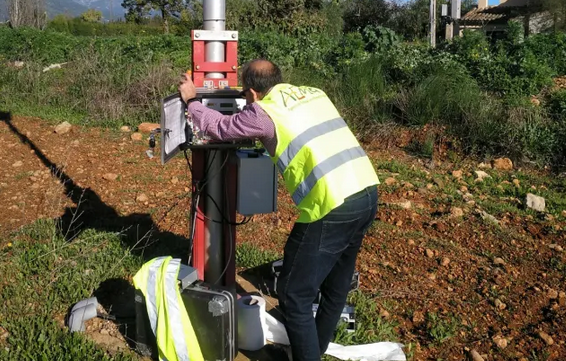 The State Meteorological Agency (Aemet) announced this Tuesday the new national record for the highest temperature almost a year after it occurred. Until now, it was held by a Cordovan town with less than 10,000 inhabitants located in a meander of the upper course of the Guadalquivir river, Montoro, with 47.4 °, measured exactly at 5:10 p.m. on Saturday, August 14, 2021, in the middle of a brutal heat wave that went down in history as the most intense of which there are records but for a short time, since the wave in mid-July has surpassed it by one tenth.

However, now Aemet has recognized that, in reality, it was another station of the secondary network in the area, also automatic and attended by a collaborator, La Rambla, marked the highest temperature ever recorded in Spain. La Rambla, with 7,500 inhabitants and located in the southern countryside, 55.87 in a straight line from Montoro and 82 by road, had registered two tenths more 22 minutes earlier.

On August 14, 2021, in the course of an intense #OlaDeCalor, the record for the highest temperature recorded in Spain was broken. The interesting thing is that it happened twice on the same day, in two different locations.
Hilo 🧵 pic.twitter.com/ODtNR326XG

Montoro as the epicenter of heat, as extreme temperatures are called in Andalusia and in many American countries, comes from afar. It was already done with the national record on July 13, 2017, when in another of the worst heat waves the station marked 47.2 °. In August of last year, there was a new “montorazo” and the station beat itself by two tenths. During this last wave, many meteorologists and fans had their eyes on him, lest he be crowned the king of national heat for the third time. Record three times would have been a news that, however, did not occur. On the hottest day of the wave, on July 14, the maximum occurred in Candeleda (Ávila) with 45.4°, followed by Montoro and Badajoz, with 45°. 24th, Moron de la Frontera (Seville) He surpassed them with 46 °, still far from knocking down Montoro.

But now it turns out that the record had already been broken. On July 12, it was revealed by Cayetano Torres, head of communication at Aemet, when he pointed out, in statements to Europa Press, that during the wave it could even exceed “the absolute maximum temperature in Spain on August 14, 2021 in La Rambla (Córdoba) , which registered 47.6°”. How about La Rambla, but it wasn’t Montoro? Yes, La Rambla. This August 2, one day after a local media outlet, Cordópolis, figured it out and published it, Aemet has officially acknowledged in a Twitter thread. Rubén del Campo, spokesman for Aemet, explains that on August 14, 2021, the second hottest day in the history of Spain since there are records, the record was broken “twice in two different locations”.

According to Aemet, “the record of La Rambla went unnoticed at first because the weather station stopped transmitting data on those days.” The machine broke down, but it continued to store some data that “the AEMET instrumentation technicians managed to recover all the information,” says Del Campo. According to Cordópolis, the station has been in a farmhouse, El Privilegio, since 1969, and since 2008 it sends the data automatically to the agency’s website. This newspaper specifies that it was on August 13 when the station stopped reporting and it did not do so on the 14th either. The transmission returned on the 15th, but the records of the 14th never appeared in the daily summary of the agency, which made the record of Montoro. “After an exhaustive process of analysis of the information obtained and of validation”, which has lasted no less than a year, the agency has certified and incorporated the figure into the National Climatological Data Bank. Ciao Montoro greets La Rambla as a new record for national heat.

“How come we are the town with the hottest weather in Spain, and who says that?” the official who attends the Town Hall switchboard is astonished. The deputy mayor, Rafi Hinojosa, was not caught off guard by the news, as she had met her in Cordópolis the day before. “The truth is that we are not surprised, we have always said that we are the warmest town, when you go out it is already a few degrees cooler”, she explains. Hinojosa assures that there they are “more than used” to living in such high temperatures and that they “cope with them well” thanks to a local variant of the jug, the rambleño, “made with very special clay from the land that naturally cools the water 10°, an ecological refrigerator that does not consume electricity”. In a town that lives from the olive tree, the vine and the pottery factory, “you leave work and on the street you don’t notice much of a difference.”

In Montoro, that La Rambla has stolen the scepter of heat from them is carried “with a lot of sportsmanship”, says its mayor, María Dolores Amo, on the phone. “We give up the baton, but the heat persists,” the councilor laughs. “The fact of being hotter has meant that many more people know us, although it is difficult to assess whether it is positive or negative publicity, but the fact is that the name of Montoro is there and that the people who visit us are going to find a beautiful town, with a wonderful historical-artistic ensemble, its houses hanging over the Guadalquivir and the second most important meander in Spain. The heat is fought with fresh air, with lots of water and with our rich gastronomy”, highlights Amo.