Universal access to affordable, safe, sustainable and modern energy is essential to meet the Sustainable Development Goals (SDG 7) established by the United Nations (UN). According to the World Bank, 789 million people live without electricity and hundreds of millions more have access to insufficient or unreliable supply, which generates poverty and impedes the economic and social development of communities.

Although Brazil is not one of the countries affected by the lack of electricity supply (according to the World Bank, one hundred percent of the population has free access), there is still room for improvement. Inspired by the purpose of increasing electrical reliability and safety, in 2018 the Brazilian government awarded Celeo Redes the PATE (Parintins Amazonas Transmissora de Energia) project. The economic development of the region and achieving a reduction in the consumption of fossil fuels, with the consequent environmental improvement, are other goals to be achieved with this initiative.

Elecnor, through its subsidiary Elecnor do Brasil, has been contracted to develop PATE. The objective is to build a 230 kilovolt (kV) transmission line to connect the states of Pará and Amazonas, in the northern region of the country. Uniting both territories (240 km in total) has required building two new electrical substations and expanding an existing one. It has also involved overcoming an imposing natural obstacle: the Amazon River.

Two watchtowers (almost) as tall as the Eiffel Tower

The design and execution of the crossing of the Amazon River, the largest and second longest on the planet, has been the project’s greatest challenge. Two possibilities were raised on the table: an underwater crossing and an aerial one. The elevated one was chosen, which brought with it the construction of the tallest tension towers in the history of the Elecnor Group.

To carry out the crossing, four towers were hoisted, two of them weighing 1,310 tons and 253 meters high and the other two measuring 90 meters and weighing 150 tons. The assembly lasted for 180 days

“The choice of the tubular steel structure project presented an appropriate geometry and included clear advantages compared to others, such as good rigidity and high resistance,” explains Armando Pérez Medina, General Manager of Large Networks of the Elecnor Group. To carry out the crossing, four towers were raised, two of them weighing 1,310 tons and 253 meters high. The elevation is considerable. To get an idea, two examples are enough as a reference: the Eiffel Tower measures 300 meters and the pyramid of Giza, 138. The assembly of the four towers (the other two measure 90 meters and weigh 150 tons) extended along 180 days.

A year of logistics planning

PATE was launched in April 2019. Before starting work on the ground, different surveying, drilling and planning studies were carried out. “The team that works in construction and engineering carried out important geotechnical studies, both on the line and at the crossing point itself. Special attention was paid to urban and environmental aspects, since the line crossed one of the most important and virgin forests in the world”, indicates Armando Pérez Medina. 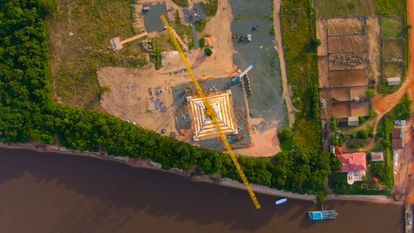 In the project, which is scheduled to end in March 2023, more than 1,500 people of four nationalities participate. 96% of the workers are Brazilian.

Aware that logistics was one of the project’s bottlenecks (especially the river part), the Elecnor team moved to the area in June, a year before work began. In Santarém, the largest city in the area, they installed a strategic distribution center to receive all the materials (piles, steel, rods, cables, machinery, supplies, etc.) and distribute them through rafts to the different towns involved in the project. Project.

The project was finally launched in December 2020, and is scheduled to end in March 2023. One of its most delicate points was finding qualified labor. “We required a large number of professionals, something that is not traditional in a construction of this type,” says Armando Pérez Medina. In total, more than 1,500 people of four different nationalities participated: Brazilian (the majority, 96% of the total), Chinese, Spanish and Argentine. In addition, Elecnor paid special attention to employing the residents of the area; 30% was native to the towns through which the project passes.

The variation between the maximum and minimum levels of the Amazon is about eight meters, which directly affects the size of the equipment that can enter the rivers

Waterboat pilots (much of the access is via rivers), welders (responsible for joining the line’s more than 40,000 meters of metal piling), and translators (to communicate with Chinese specialists) were hired to assemble the tubular towers and launch the four kilometers of cables that make up the towers of the Amazon River crossing.

Adapt to the weather

For Elecnor, the PATE project is assuming important learning in the development of large-scale works, high technical complexity and difficult logistics. The supply of materials, for example, has been laborious on certain occasions. “Some materials came from other continents, such as the towers and cables for the river crossing, from China,” says Armando Pérez Medina.

Planning the schedule of works has not been easy either. The unique climatology of the region, with long rainy seasons and significant river flooding, was studied in detail. “The main access route to the towers in the flooded regions were the streams and rivers, so the actions had to be designed based on the floods. The variation between the maximum and minimum levels of the Amazon is about eight meters, which directly affects the size of the equipment that can enter the rivers”, concludes Armando Pérez Medina.

The PATE project has implied assuming important social and environmental challenges. The Amazon region is marked by a rich biological diversity and by the presence of traditional peoples, such as the quilombolas, agro-extractivists and riverside people. Elecnor has had to create impact mitigation and compensation measures to preserve the integrity and promote the quality of life of these social groups.

For its part, the Elecnor Foundation, within the framework of its independent operations, traveled to the Amazon after learning of the start of this development and launched the H2OMe project. This is an initiative that seeks to provide the school of the Quilombola Muratubinha community, in the municipality of Óbidos (Pará), with drinking water, electricity from solar sources, a medical care center and an audiovisual classroom.

PATE has also forced the company to make a significant environmental commitment. The actions have taken place in one of the richest and most sensitive biomes on the planet, the Amazon rainforest and, at all times, Elecnor has sought to preserve the integrity of the nature reserve. Raising the towers above the treetops, reducing the suppression of vegetation and defining a layout with less impact on the environment and local communities are some of the actions implemented.

In addition, the project has involved the implementation of a wildlife escape and rescue program to prevent animals from suffering during the construction stage. In total, 1,507 rescues have been carried out, 417 sightings, 93 chases, 61 isolations and 33 collections. As for the affected species, most have been reptiles, followed by amphibians, birds, arachnids and mammals.