The City Council of Xàbia, in the province of Alicante, is studying the possibility of withdrawing the 9 d’Octubre honorary award that was granted in 1999 to Francisco Armell, the Carmelite religious now accused of abuse in the boarding school of this order in Vila-real (Castellón), in the seventies, and born in the town. These awards were created in 1996 and with them “the City Council institutionally recognizes people, groups and entities that have positively influenced the population”, according to municipal information. They are delivered in an institutional act on October 9, the day of the Valencian Community. The publication this Wednesday of a report in EL PAÍS that brought to light several testimonies against the religious, now deceased, who described him as a predator, coincided with the monthly meeting of the Xàbia Town Hall Culture Commission, which precisely had to address the next award ceremony, in two weeks. The Councilor for Culture, Francisco Moragues, informed those present of the news and, given the seriousness of the accusations, they agreed that they should consider the possibility of withdrawing the distinction, according to municipal sources.

It is an unprecedented decision, which requires the approval of the municipal plenary session, and for this the commission is expanding information on the case. He has already contacted the Mount Carmel congregation, different from the Discalced Carmelites, to find out the result of the internal investigation, opened 15 months ago, and if he has confirmed the accusations. The order, however, has been silent for more than a year and, despite its promises of “total transparency”, refuses to report the result of the canonical process opened against Armell and LG, another religious from the same center. On the other hand, the congregation is suspected of a cover-up, because after a student’s complaint, Armell was simply sent as a missionary to the Dominican Republic and Puerto Rico, where he spent nearly 30 years. This newspaper has again tried to obtain explanations from the Carmelites, without success.

Meanwhile, the publication of the article has given rise to a new testimony against the religious, and the total now rises to five. “When I saw the news I was very impressed: I know all the children in the photo. I know the colleagues who suffered abuse, and I confirm everything they say, it is exactly like that. It happened to me too,” says a former student of the seminary, JLC. He also denounces Armell’s abuses: “One day he took me to his room, because he was the one who distributed the payments, and with that excuse he called us one by one. He sat me on his lap, started caressing me and touching me, also my genitals. Then he asked me if he had someone he trusted to tell my secrets to in my town, because he knew I had a Carmelite uncle, and I said yes, a priest from my town. It wasn’t true, but I sensed that he had to tell her, to protect me. Then he didn’t come closer to me anymore, because he saw that it could cause him problems. Even so, I never told this to anyone, it was something that made you ashamed. Until today”.

This former student, after reading the news, contacted his former colleagues and at least one confirmed that he had also been touched by the priest in the infirmary. “That was something usual, he was there, he acted as a doctor, and he took the opportunity to rub you. On the other hand, all this was known, there were rumors about his favourites, he was around them and you saw them pass by his office”, recalls JLC. In any case, he wishes to record that “the school was wonderful, it was modern, we did not wear a uniform, they were progressive friars, good teachers, with whom we had a very good relationship. We did theater, we listened to music, we had a great library.” “They were magnificent priests of whom I have great memories and to whom I am grateful for his pedagogical and humanist dedication, being as I am a defender of secularism,” he reasons.

“All this is abominable, but I do not want it to be known as something morbid, but as something that has been able to traumatize boys. In my case I encapsulated it at the time. And he has returned with the passage of time. I don’t know how it could have influenced my early sexual experiences. But I’ve been lucky enough to place it somehow. I know that in other people it is something traumatic for life and that is why I am talking about it now, ”continues JLC. “I always thought that at some point these horrible things would come to light and surely there are others who, due to being traumatized, afraid or wanting to forget, do not dare. And all this cannot go unpunished. Being a school of which I have very good memories, the life of those schools, the celibacy of the priests, the search for affection from children and adults, can lead to the generation of monsters, which is what happened with Armell and so many others who have not yet we know. I encourage you to tell this so that the fear is lost and the situations that encourage these monsters to generate pain and suffering are pointed out. 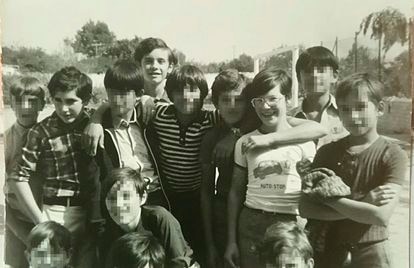 Group of students from the Carmelite boarding school in Vila-real in 1975, with their faces visible, Juan Luis Chueca, on the left, and his friends Emili, in the center, and Julián, on the right.

The complainants now hope that other former students will join them, to corroborate the accusations and that the dimension of what happened is known. The testimonies collected so far by this newspaper against Armell relate that, in addition to being very violent and known for his beatings, he was left alone with a student every day: “At night he always took someone to his room, and we were about 80 children in the bedroom. Another recalls that “on excursions he raffled who went with him in the car and who slept with him, the winner was whoever guessed right a number that he thought, and he chose whoever he wanted”. One of the victims, Emilio Alventosa, came to spend weekends at his house and even summer vacations at his house in Xàbia, his town.

Juan Luis Chueca, the former student who denounced the abuses of the Carmelites in 2021, does not understand the silence of the order: “I do not understand why they hide like an ostrich and do not explain everything they know. Here nobody asks for money, we ask for a public pardon and that they not be silent, because if we cannot remain as false accusers, a group of former students who make up some accusations”. Despite the fact that he was the denouncer of the events, Chueca affirms that he has never been called to testify in the canonical process that the Carmelites claimed to have opened in June 2018, nor has he had any personal interview with the order. He has not been told the result of the investigation nor has he heard from the Carmelites again.

The case of Armell and the other accused Carmelite, LG, have been included in the two EL PAÍS reports, with a total of 451 accusations not published until now, delivered to the Church and the Ombudsman. The cases that have come to light for now amount to 840 defendants, with at least 1,594 victims, according to the count carried by this newspaper in the absence of official data.

The information on the career of Francisco Armell that is collected on the internet, from the Carmelites and the local Valencian media, indicates that, before ending up at the Vila-real seminary, in the sixties he was a priest in a parish in Madrid, Nuestra Señora de Sonsoles, in the Pueblo Nuevo neighbourhood. Later, after leaving Vila-real at the end of the seventies, he went on a mission to Jimaní, in the Dominican Republic, on the border with Haiti. Years later he changed his destination, to Puerto Rico, first to Morovís, and then to Ciales, two mountain towns. He ended up in the mid-eighties in the country’s capital, San Juan. He lived in Residencial Público Luis Llorens Torres, a degraded area of ​​official housing, where he ran the Sagrada Familia church, which also had a parish school. Around 2007 he returned to Spain due to health problems.