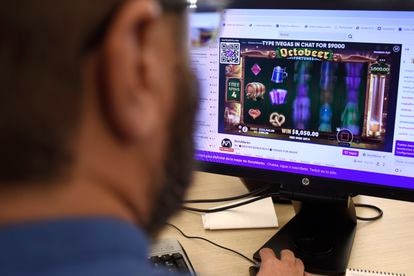 A man watches a gambling game through the Twitch platform. Lucie MAILLARD

The live video platform Twitch will prohibit from October 18 the retransmission of bets that include slots, roulette or dice games from websites that are not licensed in the US or in other countries, yet to be decided. However, it will continue to allow channels that focus on sports betting, poker, and fantasy sports (those where players pick teams with real players and compete on their stats). The company, whose audience is mostly very young, thus responds to the criticism received in recent days for the proliferation of channels focused on betting. The Spanish employers of online gaming positively valued the measure.

Twitch, a subsidiary of Amazon, is a website that allows access to live broadcasts of all kinds. Most are video games, but there is also streaming of sports (including eSports) and other topics. The channels are both free and paid. Lately, the channels dedicated to broadcasting games played in online casinos live have increased, but according to the platform “bets and games of chance represent a very small fraction of the content that is broadcast.”

Streamers (channel owners) have thousands of followers and can use their space to show live bets, which are seen by very young people. Online casinos, which have seen reduced spaces where they can advertise, can pay them to make these videos and can even offer fake prizes to attract new players.

In recent weeks there has been much criticism of these practices on social networks, especially under the label #TwitchStopGambling [Twitch, detén las apuestas]. In Spain the youtuber Wismichu has criticized it, with 2.7 million followers on Twitter: “Apart from the obvious opinion of streaming [vídeos en directo] of this type on Twitch, remember that when videos were made opening counter boxes or electronic products, youtubers tricked their accounts so that they always had flashy prizes and thus hunt down the kids.

The company has issued a statement this Wednesday in which it recognizes the controversy over this type of content. “It’s been a big topic of discussion in the community and something we’ve been continually revisiting.” For this reason, it announces that its rules will change and that as of October 18, streaming of slot machines from web pages without licenses will be prohibited in the United States and in other countries “that guarantee the protection of consumers”. Among the pages without this license, it mentions Stake.com, Rollbit.com, Duelbits.com and Roobet.com, although they are investigating to identify other similar domains.

The company already took some steps to prevent gambling addiction last year, such as banning the sharing of links or codes from sites that offer slots, roulette or craps, to tackle scams and other harm associated with dubious gambling sites. However, they have found that some people try to circumvent these rules, which can lead to an abusive gambling problem for their users.

It remains to be seen how the future ban will affect channels in Spain, where gambling advertising was regulated last year and can only be broadcast at dawn. According to a spokeswoman for the Ministry of Consumer Affairs, competent in the matter, “Twitch is a video sharing platform, so it would be subject to the rules of the Royal Decree on Commercial Communications and, of course, you cannot advertise Bet without a license on Twitch or anywhere else.” However, Alberto Garzón’s department does not report whether any file has been opened for this reason in Spain. In addition, the company has yet to specify whether it will also follow Spanish and European regulations, something that it has not yet revealed.

Meanwhile, the employers’ association that brings together the digital game in Spain, JDigital, is in favor of the new norm. “We positively value Twitch’s decision to expel from its broadcasts game operators that may be illegal and that the platform takes effective measures so that these operators – who offer their services without supervision of any regulated jurisdiction – cease their illegal advertising, since this does nothing but harm legal operators that do comply with very strict regulations,” says a spokeswoman. In any case, the specific regulation that the platform will follow has yet to be specified.

The Mar Menor becomes the first ecosystem in Europe with its own rights: jurists analyze this milestone

Reig Plà: as much peaceful peace as rest leaves

Desperate university students looking for a flat: “They charge you 500 euros for a room without lighting or windows”