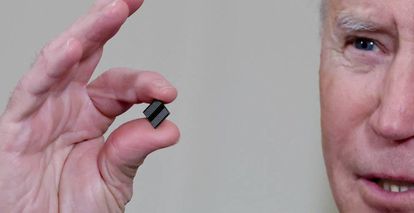 A rare, if not unprecedented, bipartisan consensus has pushed through ambitious legislation to strengthen US industry and reduce its strategic dependence on China. The Senate has approved an industrial policy law, the most important in decades, with measures worth 280,000 million dollars (about 274,000 million euros) to curb competition from Beijing and provide strategic autonomy to national industry. This is the most significant government intervention in decades and responds to the need to develop a technological advantage over the Asian rival, for example, in the manufacture of microprocessors, whose scarcity affected production in sectors such as the automobile.

The broad bipartisan support – 17 Republicans seconded the Democratic caucus – will not only allow 52,000 million dollars to subsidize the local production of microchips, but also, above all, design a long-term strategic policy to address the growing geopolitical rivalry with Beijing, with a trade war still unresolved. The strategic plan focuses on investing federal funds in R+D+i, to boost industry (including the military) and the nation’s economy. It is also consistent with the White House plan to create thousands of jobs in cutting-edge industries.

The support of the 17 Republicans, in a House divided into seats, also shows how the growing commercial and military competition with Beijing has contributed to drastically blur the traditional party orthodoxy: on the side of the Republicans, for their opposition until now to the intervention of the Government in the markets, and on the part of the Democrats, for resisting excessive federal spending.

“No government, not even a strong country like ours, can afford to sit on the sidelines” of the challenge, said Senator Chuck Schumer, the Democratic majority leader in the Senate. “I believe that [esta legislación] turns out to be a sea change that will stick.” The law now goes to the House of Representatives, where it is expected to pass with some Republican support. It could become law this week, after the signature of Joe Biden, who has defended the initiative for more than a year

The legislation, in which two capital interests converge, economic policy and national security, contemplates 52,000 million dollars in subsidies and additional tax credits to companies that manufacture microprocessors in the United States. It also plans to allocate 200,000 million to scientific research, especially in the fields of artificial intelligence, robotics, quantum computing and other advanced technologies.

The melody that surrounds the good news is the same that resonated during Biden’s electoral campaign: a clear call to Made in America, one of the slogans of his program; that is, to encourage local production and strengthen and renew a sector that had been overwhelmed by Chinese production, and diminished by relocation.

In addition to the geostrategic swerve, the legislation also raises hopes about the possibility of an agreement between the two parties. The example of collaboration and understanding between Schumer and Republican Senator Todd Young, who have pushed the initiative forward, is also an indication of consensus. Schumer approached Young in the Senate gym in 2019, The New York Times reports, and pitched him the idea. The Republican, a hawk on China, had previously collaborated with Democrats on foreign policy.

The approach of Schumer and Young was immediately aided by circumstances. The pandemic, which also revealed China’s strategic dependence on the supply of masks and respirators, and the subsequent bottleneck in the global supply chain, convinced many senators, including Republicans, of the need to strengthen national production capacity. The US’s dependence on vulnerable countries like Taiwan, which provides it with much of the advanced microprocessors its assembly lines need, has been another decisive factor.

Communiqué from veterans of the PSOE: "Manuel Chaves and José Antonio Griñán are victims of infamous media attacks"