The United Kingdom, paralyzed before the biggest heat wave in its history

The UK is experiencing a historic heat wave, with temperatures few of its citizens are used to. Much of the public transport, and especially the railway lines, have drastically reduced their services. The authorities have asked citizens to minimize their activity, avoid traveling, stay indoors during the hottest hours and try to work from home.

The executive director of London’s Heathrow airport, who was speaking this Tuesday for other reasons with the correspondent for EL PAÍS, explained, in an attempt to reduce the seriousness of the situation with an anecdote, how some Terminal 5 workers had briefly gone outside to have a personal memory. For the first time in history, a temperature above 40º had been recorded at a point in England. It had been at Heathrow. Exactly 40.2º. Exactly, at 12:50 p.m. (1:50 p.m., Spanish peninsular time). The previous record was held by the town of Cambridge, when it reached 38.7º in 2019. 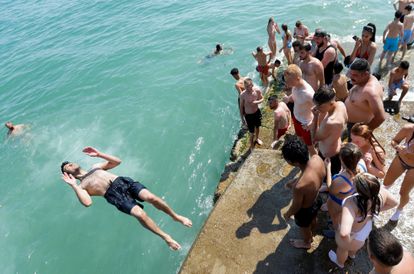 A group of people cool off in the sea in Brighton. PETER CZIBORRA (REUTERS)

In the town of Wennington, to the east of the metropolitan capital but still within the so-called Greater London, up to 15 brigades from the fire department -about a hundred workers- have had to go to put out a series of fires in adjoining homes, presumably caused by the high temperatures. The mayor, Sadiq Khan, has declared the fire “major incident”, to launch extraordinary response measures, and has indicated that firefighters are under “immense pressure” in the current circumstances. In areas of scrub and low forest near the capital, fires have also broken out. In Croydon county, south of London, about 25 firefighters were trying to put out the flames in Shirley Hills park. To the east, in Upminster, another 175 firefighters were battling for control of the wildfire in the high brush area of ​​Pea Lane.

In the county of Kent, 12 fire trucks came to put out the fire in the wooded area of ​​the town of Dartford. A firefighter works to extinguish a fire near Zennor, in Cornwall. TOM NICHOLSON (REUTERS)

The Met Office and the UK Health Security Agency last week issued a red alert, equivalent to a national emergency, for this Monday and Tuesday. If during the first of the two days the country began to reduce its activity to minimum levels, the second has already been of almost complete paralysis, with temperatures to which very few Britons are accustomed. Only four of the many underground and suburban lines in the city of London have air conditioning. A journey, last Monday, along the Bakerloo line, from Baker Street to the Embankment, at the gates of the City of London, was an almost terrifying experience, with carriages that became, station after station, ovens in which they remained trapped. commuters – many of them off-guard tourists – crushed in their seats.

The passenger figures registered this Tuesday by Transport for London, the municipal company that manages public transport in the capital, had experienced a 30% decrease compared to the same day a week earlier. Even so, more than a million people had gotten on the subway, commuter trains or on a bus until ten in the morning (an hour more in mainland Spain).

While waiting for the final results, at the end of this Tuesday, experts still predict that 42º can be reached in some areas of the country. Network Rail, the main public rail operator, has canceled many of its journeys, asking users not to travel if it is not necessary. “Our hottest tracks reached yesterday [por el lunes] the 62nd in Suffolk. The temperature of the tracks can be up to 20 degrees higher than the ambient temperature, and that causes them to expand, bend and break,” the company explained on its Twitter account, to justify all cancellations. of routes. In the sections where there is still service, the speed of the machines has been reduced by half, with the consequent increase of up to double in the duration of the trip.

The demand for water, as explained to the BBC by the director of the Thames Water company, Andrew Tucker, “is about to reach record figures, because everyone wants more water, and at the same time”, but at the moment no one is considering the imposition of consumption restrictions. 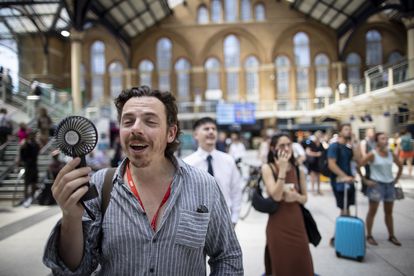 A man uses a fan to cool off on the London Underground. TOLGA AKMEN (EFE)

The British Government has decided that schools that offer summer activities or repechage courses for Baccalaureate exams, hospitals and public transport must remain open, with due precautions.

The authorities have not stopped issuing warnings in the last few hours aimed at all those who want to beat the heat with a dip in “open water”, either in rivers like the Thames or on the coast. At least five teenagers have already drowned so far this week. “There is a very specific risk in this activity, especially among young people, who are tempted to jump into the rivers when temperatures are so extreme,” Health Minister Steve Barclay said.