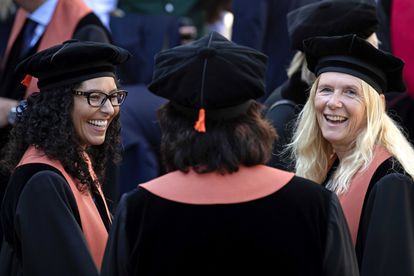 Course opening ceremony on September 5 at the University of Rotterdam.Olaf Kraak (EFE)

The covid-19 pandemic paralyzed the world in March 2020 and two and a half years later the universities, which have returned to face-to-face teaching and have the majority of their students vaccinated, see how those enrolled from other countries do not stop growing . In three of those that lead mobility – the United States, the United Kingdom and France – the number of pre-registrations is very eloquent. In Spain there are no recent data, but the first figures of three of the universities that receive the most foreigners are in that line. It is also a favorite destination for Erasmus students, but it has few foreign students who stay for long periods with ordinary enrollment: 6% in undergraduate and 21.3% in master’s degrees in the 2020-2021 academic year. Before the pandemic, according to UNESCO, there were more than six million mobility of university students in the world every year. Stays abroad are not only very attractive for young people and employers, but also a huge source of income for host countries.

British campuses welcome half as many European students as before Brexit

The number of foreign enrollees has grown for this new course, compared to the previous one, 76% in the universities of the United States that have answered a survey by the Institute of International Education, an NGO that has been committed to student mobility since 1919. The figures had already gained 43% in all higher education centers in the previous one (2021-2022), when the pandemic began to subside thanks to vaccines. And in the opposite process, the number of Americans who went outside ―which fell precipitously 97% at the sign of the pandemic in these institutions―, rose 35% last year and 83% this year.

From the United Kingdom – with 650,000 foreign university students – there are no official data, but there is evidence, explains Carolina Jiménez, director of Educational Policy and Society at the Spanish British Council. “They had to cut the registration period to study for the degree, with the exception of Europeans, because they couldn’t handle so many applications, especially from India and Nigeria. More requests came from China, but later than expected.” However, its campuses welcome half the number of European students than before Brexit (January 2021), since tuition fees have become much more expensive for EU students ―they have gone from 9,000 pounds (10,300 euros) to 12,000 (13,700) and up to 30,000 pounds (34,200)―, they have to obtain a visa and the health card issued by Brussels is not worth it.

There are also no British data on temporary mobility. There are still some Erasmus students, although after Brexit, the country – which sent 5,000 students and received the same amount – has created its own program, Turing, so that its university students can enjoy stays around the world. Spain is the sixth destination most chosen by the British after the United States, Australia, Canada, France and Germany. Erasmus reserves 20% of the funds for other non-EU states and in this way, the British receive some Europeans with bilateral agreements between campuses.

“The recovery is absolute. We are at pre-pandemic levels or above. There has been this parenthesis, but the motivation and interest of the students are greater”, underlines Sara López, head of internationalization at Pompeu Fabra University in Barcelona. “And in addition, we have inherited the hybrid and virtual teaching possibilities that complement the mobilities. I don’t know if I was talking about euphoria, but I am talking about contained demand”, continues López, recently appointed vice president of the European Association for International Education (EAIE), a very powerful network of exchanges.

In France, university pre-registration for this course had already increased by 18% last August compared to pre-pandemic figures ―140,000 new applicants from 70 countries―, according to data from Campus France, the agency that processes access. The number of total foreigners has already exceeded 400,000 students, numbers light years ahead of Spain, which is limping in internationalization, one of the vital indicators to position itself well in world university rankings. Many French business schools have teamed up with luxury brands (fashion, wine or restaurants) to offer degrees that attract Asian students, great lovers of French glamour.

Last week, the European Association for International Education held its 32nd fair and it did so in Barcelona with more than 6,000 attendees from 90 countries – a record number of registrants – who have not seen each other in more than two years. An example of the international pull, such as the emergency appeal of the Dutch universities so that foreign registrants ―a huge wave after Brexit― who have not been able to find accommodation, cancel their registration.

In Spain, where visa limitations have not been as demanding as in the United States and last year they returned to face-to-face attendance, the figures speak of a lot of ground to recover: in the 2020-21 academic year there were two thirds less mobility of foreigners than before the pandemic (down 37,400 exchanges). In 18-19, 57,100 foreign university students participated in mobility programs ―with Erasmus in the lead―, a figure that fell by 1,500 students a year later (19-20), because part of those who were going to enjoy a scholarship only in the second semester, already in the middle of the pandemic, they did not move to Spain. The European Commission paid for the repatriation of the students already displaced by Europe. A thousand Spaniards became stranded throughout the continent.

For the next call (20-21), the Commission, which was not willing to stop the program that has done the most for the cohesion of Europe, opted for a hybrid model: during the virtual period the student did not receive the economic amount of the scholarship, but organizational support. But in many cases the Spanish universities, who did not want even more organizational shocks -as in the rest of Europe-, cut the offer of entry and exit scholarships and even canceled programs with certain countries.

As a result, those displaced to Spain dropped to 19,600 ―65% less in public schools and 69% in private ones―, although in many cases they either followed the online classes from their homes of origin or locked up in the residence or apartment of the country of destination, except for some lessons and practices. The data differs according to the geographical areas: those who arrived in Spain from distant countries with enormous difficulties to move fell much more (87% less from Asia, Oceania and Latin America; 96% less from the United States), than those who came from nearby ( 51% less from the EU, 60% from the rest of Europe and 35% from Africa). It also happened in the case of Spaniards who opted for mobility abroad.

“Spain does not play its cards in internationalization”, complains Jiménez, from the British Council.

The University of Granada (UGR), one of the five most requested Spanish destinations by Erasmus, now offers figures that are encouraging. The entry scholarship holders of this program have more than doubled in the last two courses (from 977 to 2,198) and 1,706 are expected for this first quarter. Mobility is even greater among UGR students who go on Erasmus. For September 2020, only virtual places were offered and 797 accepted them ―with the hope of being able to move later―, last year they returned to mobility and they became 2,010. In this first semester there are already 2,262 Erasmus students.

At the University of Seville, the avalanche of Erasmus began last year, when outgoing mobility almost tripled compared to the previous year (1,430), as many of those who could not leave earlier were encouraged. This course will be at least 1,730. Among foreigners there is also enthusiasm. At the University of Barcelona they present the data of the last two academic years: the incoming Erasmus almost tripled and the outgoing ones doubled.

“In my opinion, Spain does not play its cards in internationalization,” complains Jiménez, from the British Council. “Each university goes on one side, on the other the SEPIE [Servicio Español para la Internacionalización de la Educación, dependiente del Ministerio de Universidades], the autonomies do not help… When the great battle is to promote the Spain brand”. The expert considers that Spain also does not take advantage of the “strength” of its business schools, year after year in the lead among the best in the world. “How is it possible that these business schools are not our star ship, like the UK has Oxford and Cambridge? Because they are private”, she wonders, and answers. “And the other problem is that internationalization only focuses on public universities, that there are exceptional ones, but they are slow horses because of the bureaucracy.”

Smart compact projector with power bank option in the test