The terrace of the weekend: Montemar, fish at a good price with views of the beach 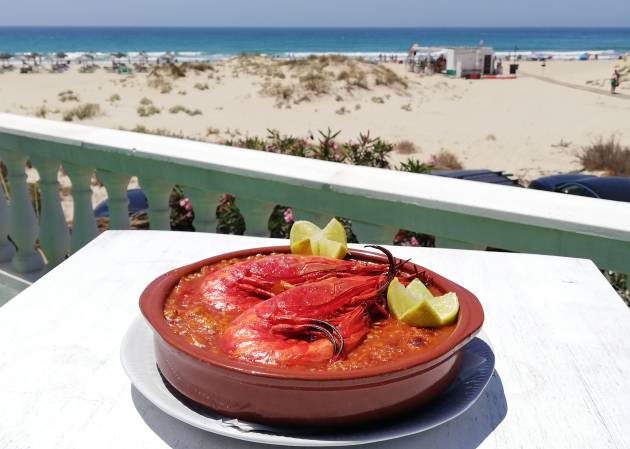 Zahara de los Atunes is a town in Cadiz with just over a thousand inhabitants where everything is within a 10-minute walk, at most. Despite this, there are places that people do not usually go to because they are far from the center. The same 400 meters that in Madrid or Barcelona are “next door”, in summer, on vacation and in a town, they become a half marathon. One of these out-of-the-way places is Montemar, a restaurant with a terrace nestled between the Cachón River and the sand of the beach, in the area to the west of the municipality. The views, you can imagine, are to take photos until you run out of memory on your mobile, but the kitchen is not far behind since the brothers Antonio and Nicolás García set up the business a decade ago.

“We always say that we are the great unknown of the town; even today many customers tell us that they had never come to this corner. When they sit here for the first time, they are surprised by the place and, more and more, by what we offer them”, says Antonio García, chef and one of the two managers. The place, located on the second floor, has an austere decoration, without aged wooden tables or those ubiquitous filament lamps that we have all seen at IKEA. The facade, white, of course. Nothing is extravagant or pretentious; the important thing is the kitchen, which, like its terrace, looks out over the sea of ​​Zahara.

Atuna in all its cuts

As in so many other restaurants in the town, the almadraba red tuna is one of the stars of the Montemar menu. There will be those who are fed up with the fashion that there is with this fish in many Spanish cities, but here, in a town whose last name is “de los Atunes”, its presence is justified. In this case, the product is purchased from Petaca Chico, one of the two companies in Cádiz dedicated to marketing it.

“We have a cuisine based on the traditional, with typical dishes of local gastronomy, as well as on the Japanese, especially on the subject of raw food, in which I have been training for years,” explains Antonio. With these two forms of preparation, they take advantage of many parts of the tuna: “We always try to have almost all the cuts so that the client who comes can eat a rib one week and another a morrillo, a facera or an ossobuco, for example,” says this chef Zahareño

Thus, with the discharge -part of the black loin with which the highest quality mojama is made- they prepare spicy tacos based on wakame, and with the bull cut of the ventresca, a sashimi. They also have the grilled or grilled trinidad tuna: tarantelo, belly and morrillo. “And as for traditional recipes from Zahara, we use the mormo -semi-fat meat from the head, located between the morrillo and the contramormo- in marinade and classic stews, such as onions or tomato”, points out García. The price of these last three dishes is the same: 19 euros, not expensive if we take into account the quality of the product.

And although this tuna is the most valued ingredient, in the same waters many species are also caught that make anyone salivate. “We play with the fish from the area: bocinegros, borriquetes… We make them in oil or on the charcoal grills that we have,” details the cook. They also offer sea nettles, cuttlefish and fried squid, scrambled eggs with sea urchins, sea bass ceviche, seafood rice dishes, lemon fish tartar, semi-cured mackerel on coleslaw or shrimp tortillas, among other dishes.

In this place, except for the meat, all the dishes have a marine touch: the pink tomato has tuna loin, the wakame salad is served with a little smoked fish, and the salmorejo, with mojama. The artichokes are also accompanied by a heart of cured tuna, and the payoyo goat cheese with citrus vinaigrette is complemented by some anchovies. Removing the heavy ones from the jet skis, any animal that is in the sea at this time is likely to fall into the kitchen of this establishment.

The current menu, in which raw materials as precious as tuna appear, has nothing to do with the one from 2012, the year Montemar opened. “My brother Nicolás and I set up the business in a very humble way, our family had never been in the kitchen. We started giving breakfasts, but with the goal in mind of having our own restaurant”, recalls Antonio García.

This chef has always had a clear vocation: “When I was a kid I never let my mother cook for me, and when I was 11 or 12 years old I used to prepare my stews and other dishes. Later I studied a training course in cooking, where I met two teachers who encouraged me to follow this path”, says Antonio. After spending a season in Innsbruck (Austria) and Tenerife, he returned to Zahara and began giving breakfasts, but those two mentors knew very well that this was not for him: “Daniel and David helped me a lot to love this world even more . They came to the premises and told me that I had to set up something big”.

After a while, those toasts became elaborate dishes, and coffees and teas became wines and beers. “When I started here I wondered where I would be after five years, and when they passed I saw that we had improved many things. I knew it was a slow journey, different from other businesses, ”she acknowledges. After another five years, Montemar has positioned itself as one of the most prominent in the town for eating local fish at a good price, although he assures that they still have room to grow in some aspects. “We are in a privileged place, and I think that the location deserves that everything we offer is also just as exciting. With time we will achieve it. Little by little”, concludes Antonio García.

Three plans for before and after

At mid-morning and to quiet down the roars coming from the intestines, nothing better than going for tapas at the Juanito Brewery, just opposite the homonymous restaurant and in the heart of the town. In this informal bar you can order a tuna sirloin and caramelized onion toast, Russian salad or some good seasoned potatoes. Everything at popular prices and on high tables, nothing fancy and tablecloth.

After the corresponding tapa, it is time to make a pilgrimage to the The Trumpet kiosk, located on the beach of Zahara de los Atunes, very close to Montemar. There you can have a beer before lunch while you watch people play shovels or take the color of the carabineros that you plan to taste later. And if you’re wearing a swimsuit, which I hope you are, leave the bottle for someone for a moment and take a dip.

If after lunch or dinner you are already thinking of eating tuna even for breakfast for the rest of your vacation, you can go to the Five Senses store, where they sell preserves from Gadira, a company that owns the concession for three of the four traps in Cadiz. In addition, they also have other products from the province, such as honey, cheese or wine.