The Supreme Court declares the nullity, retroactively, of the fines of model 720 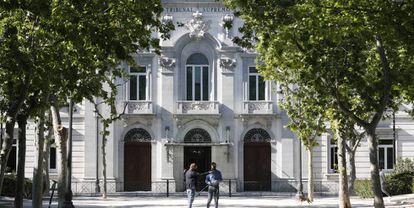 Facade of the Supreme Court, in Madrid. PABLO MONGE

New setback for model 720 of declaration of assets abroad. The Supreme Court has established jurisprudence and has declared the nullity, with retroactive effect, of the fixed fines imposed by the Tax Agency for reporting after the deadline on goods and assets abroad. The verdict comes after the blow of the European Justice, which in January overturned the sanctioning regime of this informative model for considering it disproportionate and violating the right to the free movement of capital.

The Second Section of the Third Chamber of the Supreme ruled in two different sentences, issued on July 4 and 6, which estimate an appeal against a sanction from the Tax Agency related to model 720. It is a fine of 5,800 euros imposed by submit a statement relating to the 2012 financial year after the deadline. The sanctioned taxpayer had reported extemporaneously, in December 2014 and without prior request from the Treasury, on assets (in particular, shares and securities for an amount of 359,476 euros) that she owned in Switzerland, when the legal deadline to do so was April 30, 2013.

The Tax Agency imposed a fine for each data declared after the deadline, which the taxpayer appealed to the Regional Economic-Administrative Court of Extremadura and the Superior Court of Justice of the same community, without success, until reaching the Supreme Court. In his appeal, he argued that model 720 “does not meet the requirement of proportionality” and that “the different tax treatment (…) violates the principle of free movement of capital.” The State attorney rejected the appellant’s arguments ―“in view of the amount and the penalty imposed, it cannot be seen that there is disproportionality,” he said―, waiting for the EU Court of Justice to rule.

Model 720 is an informative declaration, approved in 2012 by the PP Government, which must be presented by tax residents in Spain with assets and rights abroad worth more than 50,000. Not doing so, presenting it late or incomplete, implied until very recently very high fixed penalties for each data omitted or communicated after the deadline, in addition to a penalty of up to 150% of the undeclared quota. For this reason and after several wake-up calls, the European Commission denounced Spain before the Community Justice, which on January 27 agreed with Brussels.

The Court of Justice of the European Union (CJEU) considered the sanctioning regime of model 720 contrary to EU law, and in February the Government modified it, lowering the fines and introducing the standard limitation period of four years ―before it did not prescribe ―.

In the sentences known this Wednesday, the Supreme Court collects the ruling of the CJEU and concludes that the sanctioning regime that establishes fixed fines for declaring after the deadline, without prior request from the Administration, “violates the obligations” that Spain has under the treaties and related to the free movement of capital, “given that such sanctions are disproportionate with respect to the sanctions provided for in a purely national context”. “For all of the above, we have to uphold the appeal, uphold the contentious-administrative appeal and declare the nullity of the contested resolutions,” he says.

The high court specifies that the right of individuals to not apply the sanctioning rule of Spanish law contrary to community law, and the nullity of the sanctions imposed in compliance with that rule, derives from the very provisions of European law, and not of the CJEU ruling that so declared. “The rights that correspond to individuals do not derive from the judgment that declares the breach but from the very provisions of Community Law that have direct effect in the internal legal system,” he details. That is to say, it recognizes the retroactive nature of the nullity of the sanctions, even before the sentence of the European court.