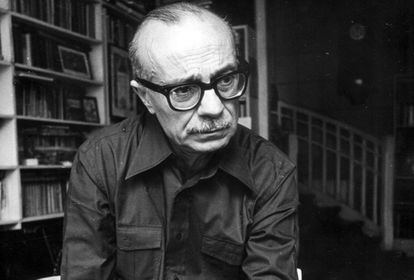 The Argentine writer Ernesto Sabato, who appears in this image in the library of his home.

From the window you can see the lonely beach, swept away by the east wind. In a corner, a woman contemplates the horizon and until my memory comes the painting that Ernesto Sabato imagined for his novel The Tunnel, a painting where a woman appeared who, in turn, was contemplated by another woman (this one made of flesh and blood) by the name of María Iribarne and who would be killed by Juan Pablo Castel, the painter of the painting.

From Cervantes’ game, Ernesto Sabato builds a dark work that he wrote after leaving his job as a scientist at the Universidad de la Plata (Argentina), where he taught quantum mechanics. All in all, The Tunnel is still a scientist’s novel. Written in the first person, the protagonist of it is an obsessive and methodical painter, whose mathematical order collides with chaos, with the unpredictability that María Iribarne represents, the object of his desire; a woman who behaves like one of those invisible particles that do not allow themselves to be reached in the right measure of her and whose position makes it impossible to calculate the speed of her actions. In one of the paragraphs, the Argentine writer comes close to Heisenberg’s uncertainty principle, enlightening us about the protagonist’s existential anguish, placing him as someone who was standing in a desert and suddenly changed places quickly. “Speed ​​doesn’t matter”, writes Sabato, “you are always in the same landscape”.

Sabato builds a dark work that he wrote after leaving his job as a scientist at the University of La Plata (Argentina), where he taught quantum mechanics

The novel was written at the end of the forties, during a Christmas summer in Argentina, because these things happen in the southern hemisphere, as Sabato himself would say, who, at that time, spent his vacations banging on an old typewriter at the shadow of its publisher, Jacobo Muchnik. It was during that same summer when the scientific vocation of a very young Mario Muchnik was manifested, who was already beginning to snoop on the vacuum fluctuations contained in atoms. On the contrary, for Sabato science had ceased to be a welcoming order and the recent events of the terror caused by the bombs of Hiroshima and Nagasaki had reaffirmed his position.

The Argentinian author always felt comfortable surrounded by bohemians of the most varied fur, such as the French surrealists with whom he came into contact in Paris almost on the brink of World War II and with whom he drank the night making exquisite corpses. In the morning, Sabato worked at the Curie Laboratory in Paris, where he was breaking down matter in order to investigate the effects of atomic radiation. But the hangover of the times did not allow him to inhabit two worlds so opposite in appearance. So he caused the cosmic cataclysm in his life and dove into literature to make both worlds compatible.

After The Tunnel, Sabato released two more novels. The next, published more than a decade later, was entitled On Heroes and Tombs. In one of its chapters, “Report on the blind”, Sabato shows us with scientific method and rigor the existence of an ancient plot from which the great tapestry of the world is woven. For psychiatry, the aforementioned chapter of Sabato’s novel is nothing more than a metaphor of our unconscious, of our storage room, where the rational story is built with the subterranean remains that remain rooted since before we were born.

Because literature is the artistic expression that ferments faster in our unconscious; a catalyst that leads us to realize that the sun and the wind have much in common with a bubble of cava, as much as the blind footprint of a woman on the sand of a deserted beach.