The struggle of ostomy patients: “It is not worthy to enter a bathroom on your knees”

Everyone has to go to the bathroom. For most people it is a routine act, compatible with going to class, to the street, to the supermarket or to see their children’s Christmas performance. But the reality is much more complicated for people with an ostomy, who have to dispose of their excrement or urine in a bag attached to their body. To do it well, they need an adapted toilet, and there are only 82 places in the entire Spanish territory that have them, most of them hospitals. This Saturday is World Ostomy Patient Day, a date that they want to take advantage of to make their claim heard to include toilets adapted for ostomy patients in the technical building code.

An ostomized patient is one who has undergone an ostomy, an operation in which a hole is made in the abdomen to remove the digestive or urinary tract, and which allows the passage of waste to these containers, known as collection bags. The average age of people with this intervention is between 45 and 55 years. The causes are very varied, but they always include the alleviation or overcoming of a problem: cancer, Crohn’s disease, ulcerative colitis, infections or even car accidents, among others. The ostomy or stoma is not, therefore, a disease, but a solution that, despite saving and restoring quality to many lives, can also be a difficulty for day to day.

In Spain there are around 200,000 people with collection bags, according to data estimated by the Federation of Associations of Ostomized People of Spain (FAPOE). In 2018, the Ostomy White Book estimated less, about 70,000, although it estimated at 16,000 new patients who receive an ostomy each year. Distributed throughout the peninsula and the islands, the 82 places with toilets for people with an ostomy have been achieved thanks to the work of families and associations, according to FAPOE. In the city of Barcelona alone there are 150 public toilets, according to the City Council.

Without the conditioned services, people with an ostomy cannot go out to walk, dance, dine or work in peace. Lacking a sphincter, bowel movements and urine cannot be controlled, so it is difficult to know what time of day the bag will fill. The fear of leaks and not having a suitable place to empty them paralyzes the lives of many of them and can cause injuries, so many prefer to stay at home. “Life begins to revolve around the bag and the bathroom,” explains Yolanda Fernández, vice president of FAPOE and a survivor of bladder cancer.

Due to Crohn’s disease, Ángela Paz, Vice President of the Socio-Sanitary Association of Inflammatory Bowel Disease and Ostomized Patients (ASSEII), has an ileostomy, a type of stoma whose opening connects to the lower part of the small intestine. “It takes away my social life, it takes away my quality of life and I end up saying: ‘Well, this week I’m not leaving the house’. She is 59 years old. “It’s not something for older people, it also happens to many young people,” she says.

Oliver García is 23 years old, he is a student and left his degree due to the complications that Crohn’s disease and the stoma caused in his academic life. “I didn’t feel very understood by the university,” he says. He now tries to break the taboo of stomas and bags, while he gets a higher grade. “The first three years I did lock myself in the house out of shame and the complexes that having a bag generated in me and that, for example, they would look at me on the beach,” he recalls. “But my friends understood and now I can say that having the device has greatly improved my quality of life,” he says.

From the FAPOE and other associations, ostomy patients have been asking for more adapted services in town halls and autonomous communities for years. “In all the places where motions have been presented, they have gone ahead by majority”, says María Ronderos, responsible for Communication at FAPOE. They managed to get a motion approved unanimously in the Senate in 2021 at the request of the Popular Party that urged “to continue improving the accessibility of public buildings so that the toilets are adapted to people with an ostomy and to promote awareness and awareness measures Social”. Even so, the Government has not contacted any association to develop the motion. “We also had a meeting with the socialist and popular parliamentary groups in Congress, they told us that they would review it, but for now we are still waiting for a response,” laments Ronderos. With the PSOE they met on April 6 of this year; with the PP, on March 7.

“They are not even economically expensive,” says Fernández. “We have been studying the characteristics of the toilets for a long time so that they can be adapted in the most efficient way. What we need is a raised toilet at belly level, a counter to put all the products, a small-caliber rinser to be able to clean the bag and a mirror that is at a certain height to see the bag, ”he explains.

To change the bag in a normal bathroom, ostomates have to juggle. “Many times, space is very limited. We have to kneel, putting paper or garbage bags on the ground. So I get out my scissors, my plates, my mirror, my gauze pads, my skin protectors, everything. If the toilet has a cistern, I leave some things there. If not, to the dirty ground. When the light goes out, I turn on a flashlight that I wear around my neck,” explains Paz, adding: “Be careful not to splash it, and wear gloves. It’s important because of infections.” Sometimes bending over can damage the abdominal area of ​​the ostomy. “We need adapted spaces because it is not worthy to enter a bathroom on your knees,” asks Fernández.

She cannot accompany her daughter to her favorite park, because there are no nearby bars to go to. She has them studied. That’s why she always carries a plastic bottle on top of her, to empty the bag. Garcia is angry that he can’t make long-term plans with her friends, like trips or festivals. “Besides, since I have to go to the bathroom more, I always end up paying in bars,” she adds. Ronderos, who was forced to drop out of language school due to a bag accident, has gone two whole days without eating in order to go to an important event or place. “If the intestine doesn’t have anything to put out, the bag doesn’t fill up. It is the only thing that allows me to go safely, ”she confesses. “We live in a country with a great culture around food, important for the family environment. We avoid it and we miss all that, ”says Paz. 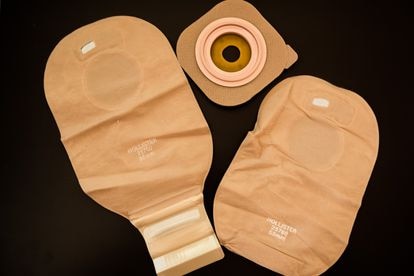 Many patients have emotional complications after the operation. Specialist stomatherapy nurses can give them the help they need, both practical and psychological. She is a key support figure, present “before, during and after the intervention”, explains Inmaculada Pérez, president of the Spanish Nursing Society (SEDE), an expert in stoma therapy. “The work in ostomy consultations focuses, above all, on psychological help, which the patient needs because there is an alteration in their body image after surgery. We also avoid complications, immediate or late, and teach basic care of the stoma”, explains Pérez. “It is essential support for us and our quality of life, especially during the first years,” says Ronderos.

The joint visibility work carried out by the SEDE and the associations has significantly increased the number of ostomy consultations in recent years, both in public and private centers. Currently there are about 250 scattered throughout the territory. “But there is a great inequality between autonomous communities, we cannot say that all the demand is covered”, laments Pérez. “We need to expand training in stoma therapy, both in emergencies and in primary care,” Paz demands, “because there are not enough experts.” Fernández asks that it be recognized as a specialty. “Moving from province to province is not always easy for us, we can neither go by train nor by bus,” he says.

In addition to the psychological aspect, there are also physical consequences derived from the ostomy. Paz’s ileostomy causes stool to be liquid and corrosive. You have to be especially careful with leaks and bag changes, because you can burn your skin easily: sometimes with first, second or even third degree burns. The collection bags are covered by social security, but the ointments and drugs necessary for treatment are not. Antidiarrheal drugs, for example, were removed from the catalog. Paz takes eight pills a day from a box containing 18 that previously cost three euros. Now it costs nine, so the monthly expense amounts to 90 euros per month, only for one medication. “For people who receive work disability pension, it is an unaffordable expense,” he protests.

García has a much better social life than at the beginning, and speaks openly about the ostomy. “In this society, what is different is branded as rare, and what is rare is discriminated against. I want the ostomy to be visible so that those three years I spent would not be suffered by anyone”, expresses the young man. For Fernández and Ronderos, the stigma has to end because they deserve to “go to the bathroom like everyone else.” Paz explains that “it is like an invisible disability”, but he retains the will to fight. “Well, look, sometimes I go ‘by the leg down’, but we have to raise our heads, continue, and normalize”.

—And what will you do when there are many adapted toilets?

—Oops! Travel and see all my wonderful Spain.

Nortegas tests the future of hydrogen in Bilbao