The State Attorney General promotes Dolores Delgado, despite the rejection of the majority of the Fiscal Council 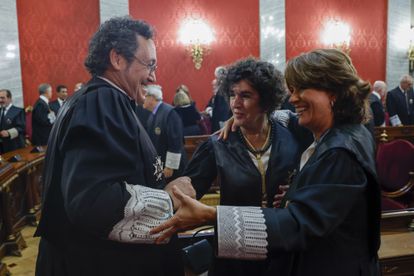 The state attorney general, Álvaro García Ortiz, has proposed this Thursday to promote his predecessor, Dolores Delgado, to courtroom prosecutor, the highest category of the race. Delgado, who after submitting his resignation as attorney general in July for health reasons had to join his post as prosecutor at the National High Court, was one of the 20 candidates for the head of the Robed Prosecutor’s Office of the Supreme Court (in the Sala de los Military).

The appointment proposal has been made by García Ortiz with the vote against the majority of the Fiscal Council, its main advisory body: the six members of the majority Association of Prosecutors (AF) have refused to support Delgado, who has had the support of the two directors of his association, the Progressive Union of Prosecutors (UPF); the deputy prosecutor of the Supreme Court, María Ángeles Sánchez Conde; the Chief Inspector, María Antonia Sanz, and the Attorney General. The member of the Independent Professional Association of Prosecutors (APIF), Salvador Viada, has abstained in the vote because his wife, the anti-corruption prosecutor María Teresa Gálvez, also aspired to her.

The vote of the Fiscal Council is not binding and the attorney general has defended the promotion of his predecessor. García Ortiz has also chosen not to renew the lieutenant prosecutor of the National Court, Miguel Ángel Carballo, from the AF, also with the opposition of the majority of the Council. The head of the Anti-Corruption Prosecutor’s Office, Alejandro Luzón, has been proposed to continue in his position.

Delgado’s is one of the first appointments of the Fiscal Council since its composition changed after the elections to this body held on May 4. The polls expanded the majority that the Association of Prosecutors already had, which was highly critical of Delgado throughout his term and was accused of promoting members of his association, the Progressive Union, to the most relevant positions in the race. of Prosecutors. Delgado’s resignation and García Ortiz’s arrival at the post have helped to somewhat reduce the tension in the race, although the conservative association has also received strong objections to the new prosecutor, who was Delgado’s right-hand man in the public ministry and they accuse of being the intellectual author of many of their decisions.

Delgado’s promotion was, for conservative prosecutors, the first litmus test that García Ortiz had, and it comes after the PSOE withdrew last June a parliamentary initiative that shielded the promotion of the attorney general to the highest category of the race. when he resigned from his post. The initiative raised a lot of dust both for its content and for its form, since the PSOE included it through an amendment in the processing of the bankruptcy law, a rule that regulates the bankruptcy processes of companies and that bears no relation with the functioning of the public ministry. The proposal involved changing the law of the Organic Statute of the Public Prosecutor’s Office so that when the position of State Attorney General is occupied by a career prosecutor, he would acquire “the category of prosecutor of the Supreme Court once he is dismissed”, what in the case of Delgado, who has served as a prosecutor for 25 years in the National High Court, where most of the time was dedicated to the fight against terrorism.

The PSOE denied that it was preparing a “tailor-made suit” for Delgado, and maintained that the amendment that proposes promoting the attorney general to the category of courtroom prosecutor when she is removed from office is one of the recommendations suggested by the Group of States against the Corruption of the Council of Europe (Greco). The argument of the socialist wing of the Government was that this shield favors the independence of the attorney general in the face of possible political or judicial pressure during his mandate, since by having promotion to the highest category guaranteed, the danger that he may act with fear of being , when you leave office, suffer retaliation and have problems in your career. Sources from the Attorney General’s Office, who also defended this thesis, also pointed out that the promotion to courtroom prosecutor of the lower-ranking prosecutors who have held the position of attorney general is a “consolidated practice” that the PSOE amendment would only raise to rank Of law.

This argument is supported by the two precedents of prosecutors who, like Delgado, jumped to the Attorney General’s Office from a second-rate position, were promoted to courtroom prosecutor (the highest category) a few months after leaving office. It happened in 1997 with Juan Ortiz Úrculo, who just a year earlier had been the first attorney general appointed by José María Aznar. After being dismissed, he returned to his position as prosecutor before the Constitutional Court, but five months later he was promoted to courtroom prosecutor at the proposal of his substitute in the Attorney General’s Office, Jesús Cardenal. He had also come to the position from a second category position (Chief Prosecutor of the Basque Country), but after his resignation he retired as a prosecutor and went on to practice law. Delgado herself did the same with her predecessor, María José Segarra, whom she promoted to courtroom prosecutor a few months after leaving office, although in that case the initiative had the support of all the elected members of the Fiscal Council, including those of the conservative Association of Prosecutors.

Relay in the National Court

The Fiscal Council has faced in its meeting this Thursday, which has lasted for more than 10 hours, another 13 places. One of the most important of those that was in contention was that of prosecutor lieutenant of the National Court, where Miguel Ángel Carballo, of the AF, aspired to re-election. García Ortiz, however, has chosen to reveal it through Marta Durántez, a non-associated prosecutor, but who has worked with the new attorney general in the Technical Secretariat of the Attorney General’s Office. This appointment has also been made against the majority criterion: by seven votes (the six members of the AF and the member of APIF) versus five (UPF, the deputy prosecutor of the Supreme Court, the head of the Inspection and García Ortiz himself) . The Anti-Corruption Prosecutor’s Office was also at stake, but in this case García Ortiz did endorse the continuity of the current chief, Alejandro Luzón, who has obtained the vote of all the members of the body, except for the APIF spokesman, who opted for Bethlehem Suarez.