The spin on Western Sahara contains irregular immigration to Spain 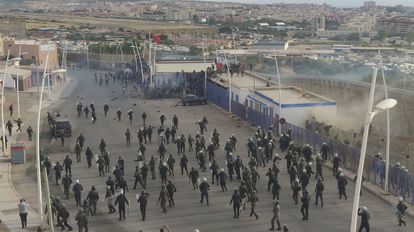 Moroccan policemen persecute dozens of Sudanese who tried to cross the border post that separates Chinatown (Nador) from Melilla on June 24. Stringer (EFE)

The new stage of collaboration with Morocco begins to mark a downward trend in irregular immigration to Spain. Pedro Sánchez’s support last March of the Moroccan plan to seize sovereignty over Western Sahara has resulted in more control, more arrests and more interceptions of migrants trying to set foot on European soil, according to police sources. The result is that since the end of August, Spain has seen a double-digit drop in irregular entries. Until September 19, 21,518 arrivals had been registered, 16.5% less than in the same period of the previous year, according to data from the Ministry of the Interior to which El PAÍS has had access. In mid-March, before the Rabat thaw, the increase was 77%.

Despite the apparent turning point, which breaks a two-year period of sharp rises, border control sources are cautious. The coming months will be the most favorable tides on the Canarian and Algerian routes and, therefore, with more activity. The trend may change because there are still thousands of candidates to emigrate waiting for their opportunity. The Moroccan reinforcement, in any case, has influenced Spain to be, since the end of June, the European route with the fewest irregular entries, a rare milestone.

After the rapprochement, the Spanish authorities began to see new gestures of cooperation from the Moroccans, although these have taken several months to be reflected in the statistics. The main show of force was the brutal response to the attempted jump of the Chinatown border post on June 24, in which at least 23 migrants were killed, but there have been more. Two police sources reveal that Rabat cleaned up corrupt officials who favored the departure of small boats in Western Sahara, which has caused the departures there to decrease, which are now concentrated in southern Morocco. Several operations have also been carried out against organizations dedicated to the irregular immigration business. According to Morocco, so far this year it has dismantled 124 migrant smuggling networks and has thwarted 40,600 emigration attempts to Europe, 11% more than in 2021.

Moroccan cooperation has also led to more interceptions at sea, more arrests and more forced transfers to Algeria or cities far from the border, the most violent practices against migrants. Sudanese refugees, part of those who tried unsuccessfully to cross on June 24, are now trying to jump the Ceuta fence and, although some of them have succeeded, most are being captured and forcibly removed from the border, according to several of them have told EL PAÍS in recent weeks. The Alarm Phone collective denounces that the raids have increased, particularly in El Aaiun (in Western Sahara), within the framework of what the authorities call Operation Sanitation, which consists of “arresting black people in their homes and driving them away hundreds of kilometers”. On September 12, the organization Caminando Fronteras denounced that the Moroccan Gendarmerie shot dead a sub-Saharan woman when she was trying to board a boat bound for the Canary Islands.

The arrivals data by provinces show two important milestones. The first is that the route to the Canary Islands, which has been on a continuous rise since 2018, has begun to show negative figures. The drop is very subtle, barely 2%. Despite the decrease, 11,513 landings have been registered and arrivals continue to be normal, although in more moderate figures than last year. Not everything is attributable to Morocco: Mauritania, Senegal and Gambia have been working more closely with the Spanish authorities for months to stop departures from their territory. Among the newcomers to the archipelago, according to Frontex data to which EL PAÍS has had access, 40% are Moroccan, followed by Senegalese (17%). The new stage with Morocco, on the other hand, has once again allowed the return flights of its nationals from the islands. Senegal is also accepting small quotas.

Another issue is that the omens that warned that Algeria, with whom Spain entered into a crisis when reconciling with Morocco, would push hundreds of boats towards Spanish coasts have not been fulfilled. The second week of September, however, the alarms went off because 900 people arrived on boats that departed from Algerian coasts, but police sources assure that the episode is explained more by the good navigability conditions of those days than by a deliberate strategy of Algiers. . The figures reveal that the Levantine route, made up of Murcia and Alicante and the destination of the Algerian boats, shows a drop of 33%. The Strait, which includes the Atlantic coast, but also Almería, the usual port of arrival for Algerians, also fell by 40%. Only the Balearic Islands, with 1,400 arrivals, show an increase of almost 14%, but it is an increase of only 170 more people compared to the previous year. The islands have seen since 2019 how landings have grown exponentially and if the 430 arrivals of 2020 are compared with those of 2022, an increase of 224% is observed. Those who arrive continue on their way because one of the punishments that Algeria has imposed on Spain has been to suspend the repatriation of its nationals.

Ceuta and Melilla present more specific scenarios. As a whole, in the two autonomous cities, arrivals, by land and by sea, have fallen by 3.3%. Melilla, however, registers 26% more entries that are mainly explained by the jumps in March and June and by an unusual transit of migrants who have entered the autonomous city on jet skis.

Morocco expects to receive 500 million euros from the European Union to cover part of its expenses on migration during the 2021-2027 period. However, the Moroccan head of migration, Khalid Zeruali, told the EFE agency that the amount “is below” his expectations, since Rabat calculates that it spends about 427 million annually on attending and controlling migrants and refugees.