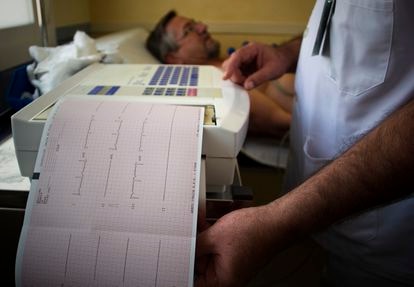 A health worker submits a patient to an electrocardiogram at the Virgen del Valme hospital in Seville.Alejandro Ruesga

The polypill for the heart, a drug that brings together in a single pill three medications indicated for patients who have suffered a myocardial infarction, improves adherence to treatment and reduces the risk of new serious cardiovascular problems, such as stroke or other, by 24%. heart attack in this group of patients. This is confirmed by the latest study carried out by the team of cardiologist Valentín Fuster at the National Center for Cardiological Research (CNIC) and published this Friday in the New England Journal of Medicine. The pill, designed 15 years ago by Fuster to facilitate therapy follow-up, reduces cardiovascular deaths by 33%. The cardiologist associates these favorable results with the improvement in compliance with the treatment regimen, since it is three pills in one.

It was not easy to get here, recalls Fuster, who has presented the results at the European Congress of Cardiology being held this week in Barcelona. His entire journey began in 2007, he relates, when he realized that “adherence to medication in cardiovascular diseases was very low.” Fewer than 50% of patients with a chronic disease take their medication properly, experts estimate.

When a person suffers a myocardial infarction, what happens in the body is that an artery of the heart becomes clogged because a thrombus has formed. These blood vessels are like a kind of pipe through which blood circulates and substances such as cholesterol tend to accumulate on the walls of these arteries creating a kind of plaque (atherosclerosis) that, when broken, come into contact with the blood and form clots that interrupt the proper blood circulation to the heart. For this reason, cardiologists usually prescribe a platelet antiaggregant, such as aspirin, to patients with a heart attack to prevent new thrombi; but also a statin, to help control cholesterol levels and stabilize those atherosclerosis plaques; and, in some cases, an antihypertensive. At least three pills, if not more. It depends on each patient, their previous pathologies and the intensity of the infarction.

Precisely because of the complexity of the treatment with several pills and the lack of adherence to it, the idea arose of developing three pills in one: the polypill, made up of aspirin, atorvastatin and ramipril. But it was not an easy task, Fuster recalls: they knew what had to be inside, but not how, or how much, or in what way so that the active ingredients were compatible with each other and the safety, efficacy and stability of the drugs inside were guaranteed. of the pill. “We tried 50 types. The development of the polypill is very difficult”, he says. According to the pharmaceutical company Ferrer, which has participated in the development of the drug, the polypill began to be available in 2008. But it was not until 2014 that the Spanish Medicines Agency gave the go-ahead to dispense it in Spain and in 2015, it began to be marketed.

Since then, the researchers have already begun to work on the idea of ​​measuring the success of their secondary prevention strategy (after the heart attack) in terms of health and launched the SECURE study: they studied nearly 2,500 people with heart attacks from more than 75 years or older than 65 with some risk factor (diabetes, kidney failure or previous stroke, among others), and those who were divided into two groups, one of which received the polipill and the other, the standard treatment (with separate pills) . And they followed them for an average of three years.

“We looked at the coincidence of cardiovascular death, heart attack, cerebrovascular event, and urgent revascularization. Everything was lower in the polipill group. The curves [entre los grupos] they begin to separate from the first moment and remain separated at four years. If we continued with the study, the curves would probably be even more distant”, points out Fuster. The risk of these cardiovascular events was reduced by 24% among those taking the polypill compared to the group that received the separate treatment. Cardiovascular deaths, specifically, were reduced by 33%: from 71 patients in the usual treatment group to 48 in the polypill group.

Fuster assures that there is “a very direct relationship with adherence”, which was also higher in the group that received the polypill. But the cardiologist does not rule out that there are other factors involved either, although he does not specify which ones and they were not the subject of this study either. In any case, he adds, 16 subgroups were made by age, gender or country and in all of them a favorable tendency towards the polypill was shown, which gives consistency to the results, he assures.

However, he regrets, the pill, although it improves health outcomes, is not a panacea. There are other risks that can continue to play against, he admits, because patients continue to suffer from obesity, type II diabetes, hypertension or other clinical risk conditions for cardiovascular problems. “One cannot expect miracles if one does not take care of oneself”, ditch. About 10% or 15% of heart attack patients suffer another cardiovascular problem between three and five years after the heart attack, says the cardiologist. José María Castellano and Valentín Fuster, authors of the study on the efficacy of the polypill, at the gates of the European Congress of Cardiology in Barcelona.CNIC

Cardiovascular diseases are the first cause of death in the world, according to the World Health Organization. About 18 million people in the world die each year from this type of ailment.

Julián Pérez Villacastín, president of the Spanish Society of Cardiology, who has not participated in the study, points out that the research is “a step forward for companies to invest in this type of medication” to improve patient adherence. Although the study has some limitations, such as the fact that it is not blind and the patients know what they are taking and this can interfere with their behavior, Pérez Villacastín highlights the power of the message it transmits: “This is news that excites people: with a pill, your prognosis is better. The message is powerful and logical: it is in favor of common sense and it is important to convince the rest of the people, for example, that this can facilitate treatment in disadvantaged countries, where many patients cannot afford treatment due to economic reasons. ”.

One of the arguments that the scientific community has put forward against the polypill is that the clinical guidelines for the treatment of patients after a heart attack require highly personalized medicine, adjusting the doses and treatments to the specific needs of each patient, something unfeasible in practice with the fixed doses imposed by the polypill. However, José María Castellano, director of the cardiovascular research department at HM Hospitales and co-author of the study, defends the benefits of the drug, which in this study was available in several different formulations: “Indeed, the polypill could seem counterintuitive in the age of personalized medicine. However, we have a serious public health problem due to low therapeutic adherence in all areas of medicine, particularly in secondary prevention after an acute myocardial infarction”, he justifies.

Castellano adds that “the polypill was born conceptually to respond to this problem and to improve accessibility to treatment in the most disadvantaged regions, where 80% of deaths from cardiovascular disease occur globally.” “The six doses of the polypill allow some flexibility when prescribing it and, furthermore, different treatments can be added to achieve a more personalized medicine in terms of managing the cardiovascular risk of each patient,” he emphasizes.

José María Guerra, a cardiologist at the Hospital de Sant Pau in Barcelona, ​​who has not participated in the research either, assures that the study is “very interesting and more important than it seems”. “The results are spectacular, I think much better, even, than they expected. This research is important because it shows that this works and the impact it can have in the third world is important: it simplifies production and distribution and reduces costs. For fine management, in our world of opulence, we prefer separate drugs to go up here, down there, or trade this for this. But personalized medicine is very first world,” he notes. In fact, such individualized attention to monitor —and potentially modify— such precise medications requires accessibility to health systems and drugs, in addition to adherence to treatment, which is not achieved in all countries.

With this project, Fuster has always highlighted the social outlook with which it was conceived: the cardiologist looks to the most disadvantaged countries, where this drug “would be cheaper and adherence much greater.” “It’s a very effective strategy,” he concludes. Óscar Pérez, head of Marketing at Ferrer, assures that the study demonstrates the efficacy of the drug and reinforces its consistency before the regulatory authorities —it is not yet approved by the United States (the FDA). Without specifying prices or figures, Pérez insists: “Like any preventive strategy, it has significant savings in the medium and long term.” And he assures that Ferrer’s commitment is “to make it reach all geographies, taking into account the capacities and the situation of each country”. It is already available in 25 countries. “The limitation has not been the price; it has been the lack of efficacy data and now we have it,” he says.