The Spanish economy grew by 1.5% in the second quarter, more than expected, and fell by 0.2% in the first 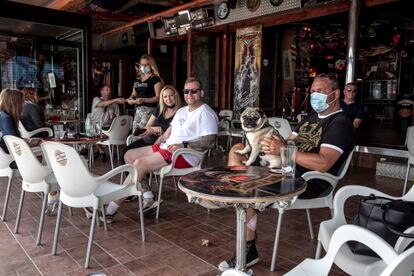 Tourists in Benidorm at the beginning of April. Mònica Torres

The Spanish economy grew by a very strong 1.5% in the second quarter despite inflation and the uncertainty generated by the war in Ukraine. However, it fell 0.2% in the first. The National Institute of Statistics (INE) has made this Friday a substantial revision of the last quarterly data that it had published at the end of July, when it estimated a quarterly growth of 1.1% in the second and 0% in the first.

As a result, it is now known that between January and March of this year, activity contracted due to the wave of the omicron variant, which caused numerous job losses, the transporters’ strike, supply problems and rampant inflation. To the point that household consumption sank 1.2% quarterly.

Instead, the picture changed radically between April and June. The INE update draws on those dates an even greater rebound than it had initially calculated. So, the desire to go out after the restrictions imposed by covid weighed heavily. With the good weather, the complete reopening of services and the recovery of international tourism and hospitality finally took place. Household consumption soared 1.2% quarterly despite rampant inflation and uncertainty generated by the war in Ukraine.

As much as energy costs weigh down industry, in the second quarter it grew by 1.7% quarterly compared to the drop recorded in the first. And investment also showed great strength, with an advance of 3.3% in the first quarter and 2.5% in the second. Although its composition varied quite a bit: in the first, purchases of capital goods dropped, which increased by 8.6%, while investment in construction stagnated. In the second, the opposite occurred and construction shot up 6.5% compared to a 2.3% decrease in the provision of machinery and equipment.

The Executive argues that this good performance of investment is largely explained by the pull of European funds. And he maintains that the impact on the economy will be 2.6 percentage points per year until 2031, a figure that seems very optimistic and that would imply that this year it would be contributing half of the expected growth in GDP and almost all of that corresponding to 2023.

After these changes, the year-on-year GDP growth rate remains at a robust 6.8%. These data are published with the new president of the INE, Elena Manzanera, already in office, after her predecessor, José Manuel Rodríguez Poo, resigned at the end of June due to discrepancies with the Government. Both the Executive and part of the analysts considered that the GDP was not being well measured if one takes into account that the affiliation is at record levels, with more than 20 million workers, and that tax revenues have already exceeded the levels since 2021. prior to the pandemic.

Some experts point out that, even though inflation is subtracting real purchasing power and that with the covid there has been a significant outcrop of the underground economy, it is not good that family consumption is still so sunk, having VAT collection figures close 20% higher. However, at the moment the incorporation of the new president does not seem to have altered much the x-ray presented by the body. Spain still lacks around 2.5% to recover pre-pandemic levels.