The Seville City Council (PSOE) has authorized the felling of the centenary ficus in the Triana neighborhood, whose trunk is being cut this Wednesday despite the fact that a contentious-administrative court is studying whether to declare the work stoppage. The environmentalists’ lawsuit filed this Tuesday has been admitted for processing, but even so the Consistory has avoided postponing its authorization and the logging has continued this Wednesday despite protests from neighbors and environmentalists. Three neighbors have climbed up the ficus last morning to avoid its felling at the last moment, and the firefighters have evicted them this noon. Meanwhile, another twenty have chained themselves to the sidewalk and 200 people have protested in front of the police to demand that the City Council protect the specimen, cataloged as a monumental tree.

At noon, the chainsaw of the operators has begun to cut down the high branches -one meter in diameter- of this 1913 tree, while the white sap fell down the trunk. From the opposite sidewalk the neighbors shouted “murderers” at the operators on the crane and the sawdust fell like a rain on the policemen, who chatted animatedly. To prevent the passage of neighbors, up to 29 agents have occupied the central San Jacinto street to stand in formation.

“This felling is the straw that breaks the camel’s back for Seville’s arboricide policy. It is contempt and the fast track is chosen, to cut to the chase, and there is no report from a botanist or arborist that defines the state of the ficus, which is healthy”, protests Valle López Tello, spokesperson for the Ni un Árbol association. less. The neighbors are outraged because the logging is supported only by the decision of the Church of San Jacinto, which commissioned a report from an architect to assess the damage suffered by the temple adjacent to the ficus. The City Council considers that the criterion of the architect hired by the Church is sufficient and that there are no alternatives to make the tree and pedestrian safety compatible. A petition on Change.org accumulates 50,000 signatures to prevent logging.

Eviction of the neighbors climbed to the trunk of the ficus of Seville. Photo: PACO PUENTES

Despite the fact that the specimen is cataloged as a monumental tree and is 110 years old, the Consistory has ignored the neighborhood groups and environmentalists, who have demanded independent reports -and not part- to assess the state of the ficus and study possible alternatives to felling The environmental groups have filed a complaint yesterday before the contentious-administrative guard court of the Andalusian capital to stop the logging, and the judge now has 72 hours to decide on the adoption of urgent measures to avoid it. However, the City Council is in a hurry and has not waited for the decision of the magistrate on duty. This morning several firefighters have advised the Local Police on how to evict the three neighbors who have climbed the tree and continue the work.

Chained to the fence that surrounds the tree this morning was the former deputy mayor of Seville, Emilio Carrillo: “Every action has a protocol, and if a facade falls, it is repaired. The difference is that we are talking about a living being, classified as a cultural asset. Why is the property not forced to take care of the tree and if it claims that it does not have money, the City Council maintains it in a subsidiary manner? Do not blame the tree for your negligence”, he warns the politicians of the socialist party that he led a decade ago. The Provincial Historical Heritage Commission of the Board ruled unanimously last April that the church, declared a Site of Cultural Interest (BIC), should be protected, trying to take “the necessary measures prior to felling.” That is to say, to rush the alternatives to the felling of the ficus. In addition, the Board recommended that the safety of people should be determined by specialists, whose opinion the environmentalists denounce has not been consulted by the City Council.

The association of Andalusian gardeners Amja offered the Consistory two months ago that its experts prepare a diagnosis of the specimen, but have not received a response. The landscaper Ricardo Librero recalls that a group of experts has proposed to the City Council, on the one hand, to build an L-shaped pergola that protects pedestrians and deactivates the danger of insecurity caused by falling branches, and on the other, to place an anti-root barrier to protect the church. “The Board has not given its approval to the felling, it has recommended hiring technicians to preserve the architectural asset [la iglesia] and the landscape [el árbol]. The catalog of unique trees in Seville has been prepared for two years and has not been published due to this felling, ”he denounces.

The Consistory alleges that the logging license was approved on May 31 after the reports of the Provincial Heritage and Parks and Gardens Commission (of the Board) and the one provided by the Church. “The license was not appealed in all that time and now they have requested the precautionary suspension whose notification has not reached us,” says a municipal spokesman. “Once the location of the court arrives, the City Council will appear and make available to the court all the documentation that it may require,” he adds. However, the Consistory does not clarify why it authorizes a felling on which a judge is deciding, an irreversible decision, and advances that it will be made available to justice when the felling is already consummated. Juan Manuel Flores, municipal spokesman, argues: “The City Council authorizes the parish the only possibility in the urban context, in a high-traffic area. to property [la Iglesia] The decisions to continue the felling of the tree correspond to him and we will support what the parish decides”, he added.

The parish of San Jacinto, whose priest has refused to speak to this newspaper, has thrown balls out in a statement: “The specimen has become a cancer that grows disproportionately in the least suitable place, although some continue to think that it is like a bonsai that we can handle as we please with the necessary care”. A year and a half ago a woman was seriously injured after a large ficus branch fell. 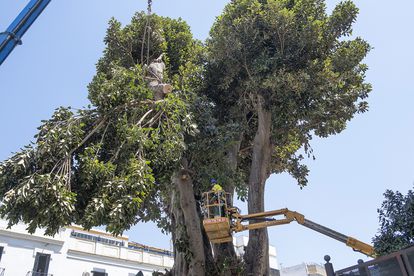 An operator is preparing to cut down part of the ficus, this Wednesday. PACO PUENTES

The platform In defense of the ficus of San Jacinto criticizes that the parish priest of the church deceived them by summoning them to a meeting knowing that the felling would begin before: “It is incredible that the parish priest has deceived us. We ask for reports from independent biologists and if it is really dangerous, let the experts say so, not an architect. We demand our right to health and the environment at a very serious moment of climate emergency”, denounces Dolores Rumi, spokesperson for the Save your trees platform.

López Tello censures: “The Anglican church shows reverence for its churches to coexist with trees, just the opposite of Spain. And while the Seville City Council meets with other cities to fight against climate change, it is believed that the citizens are idiots. This will be the political cemetery of Mayor Antonio Muñoz if he does not react to the protest”.

Experimental set: Construct the servo tester your self