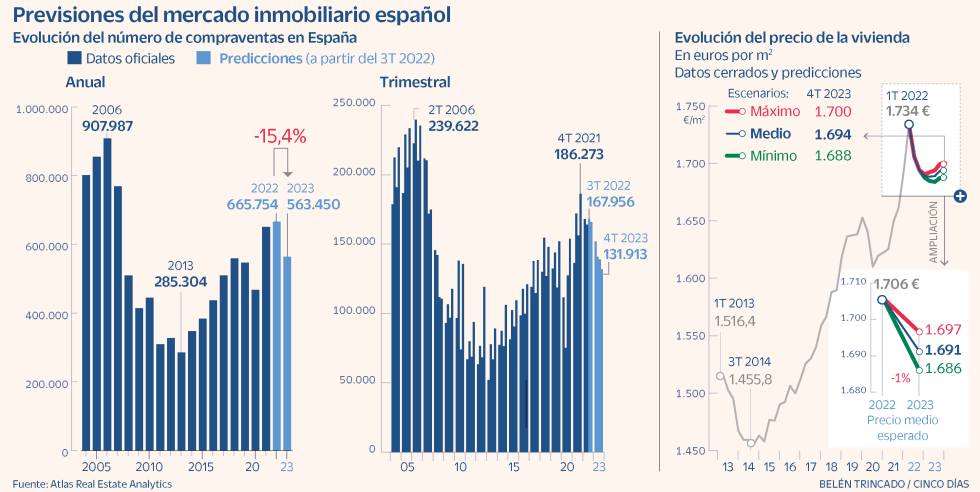 The end of the year 2022 will serve to put a ceiling on the strong increases that the Spanish residential market has experienced in the last two years, with figures that have not been seen since before the outbreak of the real estate boom both in the number of sales and in prices. However, according to estimates from Atlas Real Estate Analytics, the correction of the upward trend will have two speeds. While the number of transactions will fall by 15% per year in 2023, the price of houses will only do so by 0.9%, tending almost to stabilize.

The real estate consultancy forecasts that in the third and fourth quarters of 2022 some 168,000 and 166,000 purchase and sale operations will have been signed, leaving an annual calculation of 665,754 transactions, 2% above the 650,913 that left a year 2021 benefited by the drag effect of Covid-19. In 2023, however, the number of sales would be reduced to 563,450, always according to the consultant’s estimates. This figure, if materialized, would be somewhat above the three years immediately prior to the pandemic. In essence, there is a glimpse of a normalization of operations, located today at atypical extremes.

According to Daniel Bermúdez, co-founder and director of operations at Atlas, the forecast depends on inflation and other factors external to the real estate sector. The optimistic scenario, “which reflects a rapid control of inflation and a return to relative normality in construction costs”, would allow figures close to those of 2021 and 2022 to be obtained in 2023. However, if the crisis in prices and the rest of negative conditions become chronic, next year it could reach levels of 2015 and 2016, with some 410,000 transactions. This scenario, predictably, would be practically ruled out. Other specialized consultants such as CBRE estimate, in fact, that the depreciation of construction materials will pick up pace already in the remainder of 2022.

A separate chapter is that of prices, spurred by the strong demand for housing and by the slowdown in the construction of new buildings caused by the increase in the cost of materials.

From Atlas they foresee that this year will end with an average price of 1,706 euros per square meter, 2.9% above 2021. However, in 2023 the average value would fall slightly to 1,691 euros (a decrease of almost 1 %). This timid decrease, which would leave the variation in prices practically flat, can be largely explained by a still high search for houses. “Despite the fact that the expected demand for 2023 is significantly lower than that seen in 2021 and 2022, the supply of available housing has suffered a year of declines that will continue throughout the next year,” adds Bermúdez. It should be remembered at this point that the price of first-hand housing is at record levels in Spain, above 2,000 euros per square meter according to the Property Registrars.

The positive part, insists Bermúdez, is that “the market is not facing a perfect storm situation, with high supply and low demand, but rather a more controlled slowdown.”

The fall in supply also has a positive effect in the event that the market experiences lower demand due to a possible recession, since both variables would go hand in hand. Just the opposite, they remember in Atlas, that in 2008, when low demand and high supply coexisted.