The entry into the mine to undertake a safe rescue of the workers trapped in Coahuila seemed imminent this Friday morning, after days pumping the water that filled the wells and that was the origin of the collapse of the galleries on August 3. . Civil Protection stated that the conditions were already in place to descend without risk and begin the search, but just a few hours later the road is retraced again: the galleries are clogged and unofficial sources indicate that the water level has risen again in the tunnels. In the morning, the person in charge of Civil Protection, Laura Velázquez, reported that they had extracted 97% of the water and that they had “the necessary resources to initiate search and rescue actions.” The uncertainty in the rescue tasks is the logic in a mine that does not even have updated plans.

More than 200 hours have passed without a trace of the miners. Ten days underground, without food, drinking water or electricity. With the risk of gas leaks and barely the light of their flashlights. The only hope that the workers are still alive is that they have found an air bubble, but too much time has passed and a live rescue seems more like a miracle of statistics than a real option. Even so, the families of the victims cling to that possibility like a straw. They recall stories of day laborers who were saved after being trapped for more than a week in almost identical conditions. This Thursday, a group of family members went out in a procession at sunset, carrying candles and praying for the miners.

The three wells in which the miners worked are located just a few meters away from the Las Conchas mine, abandoned almost 40 years ago and full of water due to its proximity to the Sabinas River. The liquid made its way and flooded the galleries in which the workers worked. Five were able to be saved, 10 men were left below. Draining the water, a titanic task that has required twenty specialized pumps, has been the concern of the rescuers for the last week. A fight against the elements that this Friday had managed to reduce the height of the flood to 72 centimeters in one of the wells, 2.6 meters in another and 4.2 meters in the last.

On Thursday, Army divers descended into well four to remove logs and sticks that were obstructing the entrance to the galleries. A special pump was also placed to remove not only water, but also mud and earth. The internments of the rescue teams have occurred in recent days, although they have only been able to extract wood and sticks, while the impotence of the relatives reaches more serious levels every day. An explosion is feared in the camp if the miners don’t show up soon. 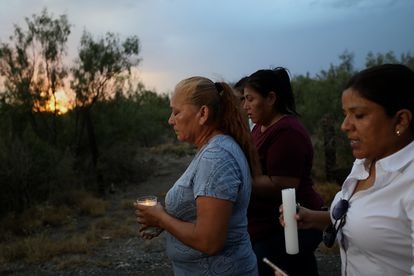 A group of relatives and friends of the trapped miners walk with candles to the access point of the mine, this Thursday. ANTONIO OJEDA

A defendant by the Prosecutor’s Office

The Attorney General’s Office has charged Cristian Solís Arriaga, the man in charge of the wells, for “his responsibility in all acts of direction and administration in the illegal exploitation of the subsoil, which is a national asset.” However, all the sources consulted in Sabinas indicate that Solís Arriaga is a mere figurehead, a scapegoat placed by the real owners to take the blame. López Obrador himself has argued in the morning that “it is likely that they have used him (…). Once the accident happened, they went to enroll the workers in Social Security, surely, if it is true, it is a cunning plan to punish whoever appears by enrolling the workers in the insurance and not the dealers.”

According to the president, the exploitation of the mine was a concession that was granted in 2003, during the Vicente Fox Administration, and expires in 2053. The company that owns the exploitation is Minera Río Sabinas SA de CV, which was sold in November 2012 to the El Pinabete Mining Company. All the testimonies consulted indicate that one of the owners is Régulo Zapata Jaime, former mayor of the municipality of Sabinas. He denied it in a video on social networks, where he assured that he only worked as an advisor for the company.

Cristina Auerbach, one of the leading mining experts in the region and an activist in defense of miners’ rights, explained in an interview with EL PAÍS: “The concession is in the name of Pinabete and there is a company with the same name that has a contract. The owners of Pinabete are the partners of Régulo Zapata, who was mayor of Sabinas. The one they are putting as owner [Solís Agarra]who they say is responsible, is a boy of 27 or 28 years old, obviously he is not the owner of the mine”.

López Obrador has also pointed out that “in that entire region there has been a lot of corruption and with a lot of political influence, cacique governors, corrupt businessmen linked to politicians. In the case of this mine they are not unionized because they do not allow the worker to protect himself with a union. We have asked the Prosecutor’s Office to act rigorously, that there be no impunity, but what matters most to us is the rescue.” Auerbach agrees on this point with the president: “This started when [el expresidente mexicano, Carlos] Salinas de Gortari privatized mining. Most of the mines belonged to the State, and when the State privatized them, all the old mines were given to the local caciques. They are a small group of families who kept everything: at the same time they are coal entrepreneurs, ranchers and mayors”.

At the moment, the culprits have not appeared, while in the mine an entire broken community hopes that finally, this Friday, after ten days, the miners will begin to leave. Alive or dead.