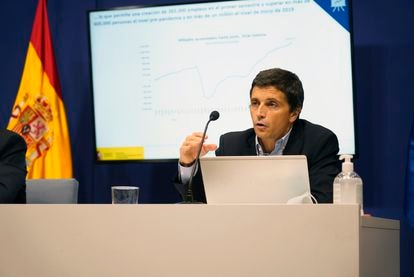 The Secretary of State for Social Security, Borja Suárez, during the press conference to present unemployment and affiliation for the month of June. MINISTRY OF SOCIAL SECURITY (Europa Press)

The latest details, always so important when closing any agreement, keep the negotiation of the new contribution system for real income for the self-employed on edge. All the parties involved, the Government, unions and representative organizations, assure that the definition of the new fiscal framework is about to fall, in the absence of the latest disquisitions being resolved. Everything depends on whether the final text to be prepared by the Ministry of Social Security, and which has not yet been sent to the social agents, according to them, incorporates the latest proposals put forward at the negotiating table. The will of the Executive, since the term agreed with Brussels has concluded -it was agreed that it would be approved in the first semester-, happens because this new contribution system is approved in the Council of Ministers this Tuesday. Something that a source of social dialogue doubts, “unless the intention of reaching a consensus has been sidelined”, he points out.

The last proposal presented by the department of José Luis Escrivá pointed in the direction marked by unions and self-employed organizations. However, it lacked some fundamental elements for these. “We continue to insist on the need to reduce the lower brackets and that the maximum transition period of nine years be consolidated in the text to achieve a contribution system for real income,” says a spokesman for the Union of Associations of Self-Employed Workers and Entrepreneurs (Uatae).

In his opinion, the most precarious self-employed should benefit from the highest discounts in the first moments, and not progressively, as the current design proposes. A postulate to which they join from the Union of Professionals and Autonomous Workers (UPTA). “We will accept this proposal as long as it is executed in 2023, and that the progressivity system for the highest tranches is a system that can be made more flexible, so that those with lower incomes can benefit from this substantial reduction, and those with lower incomes. medium and high levels can accommodate their new prices to the current situation”, indicates its president Eduardo Abad.

From the Federation of Associations of Self-Employed Workers (ATA), a body that belongs to the Spanish Confederation of Business Organizations (CEOE), they defend the maintenance “without any type of restrictions” of the flat rate for new self-employed registrations, and the elimination of the top of the contribution bases for the self-employed over 47 years of age. Above all this, they consider it necessary to emphasize that the net returns that are taken into account are “those net returns from the activity carried out by the self-employed person and not from other aspects”.

The document provided at the meeting held last Monday, June 27, and its deployment over the next three years (2023-2024-2025), contemplated quotas of 245, 237 and 230 euros per month for those workers with earnings of up to 670 euros; while at the other end of the bracket, those who declare income of more than 6,000 euros must pay installments of 500, 530 and 590 euros, respectively. In other words, the self-employed who invoice the least would have a system of decreasing quotas until 2025 and those who earn the most would have a growing path until the end of the period.

With this approach, the main beneficiaries of this new system would be the most precarious self-employed, since their fee would be reduced by up to 64 euros per month compared to what they pay now (294 euros). On the other hand, those with a better financial situation would end up paying 296 euros more. However, the key section of this table of 15 sections is that those self-employed with returns of up to 1,700 euros per month, the most numerous, will not feel the change in the model in the form of a rise in quotas, one of the main claims of the organizations that they defend them.

In his first public intervention as Secretary of State for Social Security and Pensions, Borja Suárez assured that the reform of the contribution system for the self-employed “is being finished negotiating”, and was “absolutely cautious” about the “decisive moment” in which the conversations are found. Without getting wet as to when they could be resolved, Suárez, who replaces Israel Arroyo in office —and who has participated in the entire negotiating process when he held the position of General Director of Social Security Planning— limited himself to wishing that the process concludes “in a very short period of time”.

Parallel to the development of the negotiation, and with the aim of accommodating the future regulation so that it can enter into force in January 2023, the Government has recently approved a royal decree by which the possibilities of that a self-employed change their contribution base based on their performance, and, therefore, vary the fee to be paid. Together with this modification, the royal decree also establishes the need for self-employed workers to provide the Ministry of Social Security with a forecast of their annual income when they register, so that based on this projection, it is controlled, through the data crossing with the Tax Agency, if what was declared corresponds to reality. In the event that it is verified that there is a deviation, it will be charged, if it is above, or it will be paid, if it is below, the difference to the self-employed person.

5 challenges for at the moment’s leaders

Jaume Guardiola: "The Circle of Economy is listened to, but political life does not leave much space"