The rectors demand 2,500 million and payment terms to implement the university law 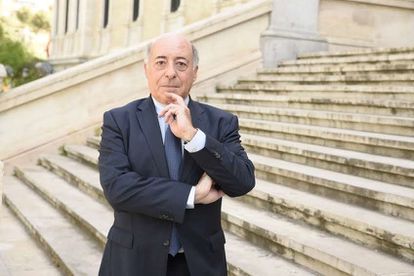 Until this Thursday, the conference of rectors (CRUE), a body that brings together very different sensitivities ―public and private, religious or secular universities―, had not ruled on the definitive project of the Organic Law of the University System (LOSU), which gave to meet the minister Joan Subirats on July 21; that is why there was expectation in hearing its new president in a commission in Congress. And Juan Romo, rector of the Carlos III University, has gone to the heart of it: the CRUE calculates that some 2,500 million euros are needed to implement the law and they demand political commitments from the administrations. “If the payment deadlines are not better specified, we run the risk that tomorrow will never be tomorrow and the financing will not finish arriving,” Romo said this Thursday in the Science Commission of Congress.

88% of the financing of the universities is in the hands of the autonomous communities, for which the CRUE demands a framework agreement between them and the central government and that a “clear, direct and clear” procedure be established so that it reaches the universities ”. Subirats, in the plenary session this Thursday, has promised to negotiate a plan in a commission of experts, “within the framework of the General Conference on University Policy” in which the minister and the counselors of the branch sit. LOSU forces campuses to regularize professors in a precarious situation, to implement a plan to stabilize young people in 10 years from the start of their thesis (now at 40 years of age, many do not have a permanent position), to attract talent in abroad, encourage mobility or do more research; and for all this, money is needed.

Between 2008 and 2018, universities lost 20% of funding and have not yet reached the budget levels of 2009. “We need more funding from the system, and that it is linked to the results of the universities. The LOSU contemplates its increase to a minimum of 1% of GDP”, Romo recalled. “For reference, Norway invests 1.8% of GDP in its system, which is the highest in the OECD. More than double that of Spain, which is 0.8%”. “The Spanish university system is between 8,000 and 9,000 million and another 2,000 or 3,000 would have to be added to reach that 1% of financing,” calculates Romo, professor of Statistics.

The law states that 5% of the university’s budget must be devoted to research and the rectors ask that this account be made once payroll is subtracted, which takes most of the total amount. This is a nod to private universities, since many are far from reaching that 5%. Romo goes further and believes that it is necessary to “refine the percentage allocated to research according to the university”. That is to say, that there are campuses focused on teaching and others that are more advanced in science, such as his institution. Currently, the economic differences are enormous, while Nobel Prize winners are hired at the University of the Basque Country, others have scant funds to survive.

“Obviously, the problems are many, deep and complex and they are not going to be fixed in a short time, but I think it can be a useful law to advance the university system.” That is why he summons his predecessor in office, José Carlos Gómez-Villamandos, now Andalusian Minister of Universities, who this Wednesday spoke of a law that is “a lost opportunity” to try to negotiate: “It is in your hands.”

The rectors want to end the replacement rate (for each retiree one person becomes permanent), because they believe that it prevents the return of talent abroad or stabilizes highly qualified professors who are already in the faculties. “The only restriction that there should be is the budget of each university,” Romo justified. Currently, for every 10 people who leave, 12 enter, because the Government has raised the rate to 120%. In a decade, half of the workforce will retire. Romo believes that the replacement rate and underfunding explain the job insecurity.

Twice as many universities as 40 years ago

Despite the hardships, Romo has taken advantage of the Spanish system that has doubled the number of universities in 40 years, is the third largest in the EU after Germany and France, ranks 11th in the world in scientific production and ninth in researchers highly cited.

Romo maintains that the law needs more ambition to “grant a broader autonomy to universities, as in the case of the election of the rector, as is the case in Europe.” The rector recalled that the European University Association (USA) places Spain in 24th place out of 26 countries in terms of university autonomy.

With Romo at the head of the CRUE and Joan Subirats at the head of the Ministry of Universities, the situation between the two institutions has improved. When the law began to take shape, with Pedro Duque as minister and Gómez-Villamandos at the head of the conference, the relationship was good, but it was wearing thin with the lurching in the project of Minister Manuel Castells, who tried to please everyone and in the end to nobody. In particular, he became entrenched with Gómez-Villamandos. At a meeting held last November of the Council of Universities ―made up of the ministry and the rectors―, only the latter took the floor to reject on behalf of all the drafting of a mandatory report for the processing of the LOSU.

This Wednesday there was a scene that stunned many deputies of this commission. Gómez-Villamandos, although he has been the Andalusian Minister of Universities for two months, assumed the position of president of the CRUE, a position he held until last April. For this reason, he used the first person plural (“we”, “us”) from beginning to end to break down point by point the amendment to the entire LOSU presented today by the PP in Congress. No one has seconded his group.

How is it possible that Barça gives 98 million profit?