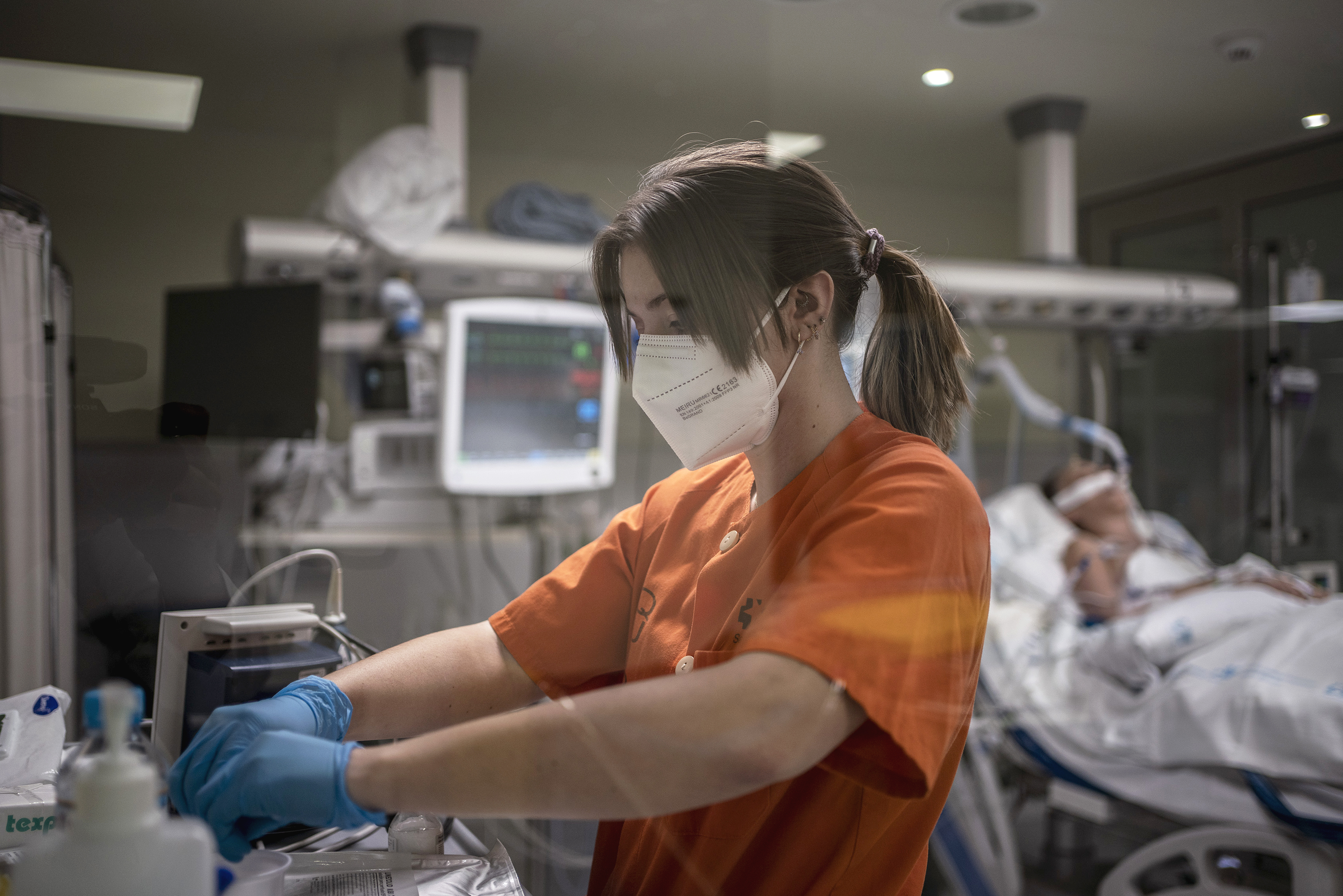 Coronavirus infections have been growing in Spain since the beginning of June, driven by two sublineages of the omicron variant that are making their way, BA.4 and BA.5, apparently more contagious than the previous ones, but also with less capacity to cause disease serious. This Friday, the accumulated incidence among those over 60 years of age (the only ones among whom it continues to be measured) rose 102 points to stand at 755 diagnoses per 100,000 inhabitants in 14 days. This is already having a clear impact on hospitals: today there are 8,205 patients admitted to the ward (1,417 more than a week ago) and 388 in the ICU, a rise that is not so pronounced compared to the previous Friday (340) that keeps these units in minimum occupancy levels since the pandemic began.

The waves of covid are becoming less and less clear. Since the end of the sixth in January, cases began to rise again during April to be above 800 cases per 100,000 inhabitants for most of May. They then dropped back to 578 (measured on June 10) to begin the climb again. Depending on how you look at it, this could be considered part of the seventh or eighth wave. There are also those who think that they are oscillations within high levels of contagion.

The landscape is still, for good, very different from what it was before the vaccines. The epidemiologists consulted do not believe that the pressure on hospitals seen in other waves will return: at the moment, the percentage of patients with covid is 6.6% on the ward and 4.3% in the ICU. But they warn: we are at the gates of the summer holidays, the income will probably continue to increase and there will be less staff to serve them.

Primary care, the main affected in the sixth wave, is already noticing it. Vicente Baos, a family doctor in the Sierra de Madrid, the community with the highest incidence (1,313 cases per 100,000 inhabitants), assures that the consultation is filling up with patients with covid. “The general symptoms are body pain, headache and asthenia at the beginning. Variable mucus in the upper tract, not very pronounced, very noticeable dry mouth, more than pain. little cough Digestive symptoms with nausea and more prolonged diarrhea. The usual duration is being four clear days and then an improvement is seen, although there are some patients with prolonged asthenia. [En general] a week there is a clear improvement. The smell and taste condition has disappeared and the bronchitis is very unusual,” he explains.

For Rafael M. Ortí Lucas, president of the Spanish Society of Preventive Medicine, Public Health and Hygiene, we are with the “eighth wave underway, the second silenced by the change in strategy.” He refers to the one in May, after the Ministry of Health and the autonomous communities decided not to indicate tests for each suspected case of covid if it occurred in healthy people under 60 years of age and, therefore, abandon the exhaustive count that had been carried until then.

“The BA.4 and BA.5 do their job. After Galicia [tercera comunidad con más incidencia, por detrás de Canarias] and Madrid, will reach the rest of the communities. Within the natural evolution of the virus, with minimization of symptoms, but with a greater affectation in those who had not yet passed the disease. The hospitals will not reach the previous levels, but it can be worrying, as when the flu increases, “says Ortí Lucas.

Antoni Trilla, Professor of Public Health at the University of Barcelona, ​​points out that as cases rise, those hospitalized also grow, frequently of advanced age and with underlying pathologies. “They usually do well with treatment and are hospitalized for fewer days [que en anteriores olas]. Few, very few, end up in the ICU. The problem is the shortage of health personnel, especially in nursing. There is a lot of healthcare activity and we have people who are very tired and sick due to covid,” he points out.

Trilla sees the rise in cases as inevitable with the expansion of the new sublineages: “I don’t think it will translate into a new wave, perhaps it will be somewhat less intense, but sustained. In Portugal we have seen 20% fewer hospitalizations with BA.4 and BA.5; It does not seem that it is going to have a great social impact now, but it may be difficult for the health system to manage”.

The background of Portugal

Portugal is emerging in the last week from a wave caused by these omicron variants that brought the rate of infections to a peak of 3,600 per 100,000 inhabitants, reports Tereixa Constenla. These figures, however, have not translated into great healthcare pressure, as occurred between December 2020 and January 2021, when the first large explosion of infections occurred in the country. Already in the next wave, a year later, infections grew, but the vaccines significantly reduced the number of hospitalizations and deaths.

In the current wave, which began in May, the contagion rate of the fateful January 2021 has once again been exceeded, although the impact on hospitals is quite small. Admissions have risen, both on the ward and in the ICU, but they are far from the pressure they endured before the population was vaccinated. Between June 7 and 13, the latest available data, there were 1,896 admitted, of which 98 were in the ICU, well below the figure reached in the first great wave in the country, when 3,000 hospitalizations were exceeded and the half a thousand patients in intensive care.

Óscar Zurriaga, from the Spanish Society of Epidemiology, believes that something similar will happen in Spain: an increase in cases that will not translate into enormous pressure on hospital care. “But you have to be aware that the pandemic (and transmission) is not over. And that as long as the virus continues to circulate as it has until now, we will have a proportion of serious cases and deaths, ”he points out.

Sara Ahmed: “There may be an concept that complaining is a strategy to keep away from your individual happiness and that of others”