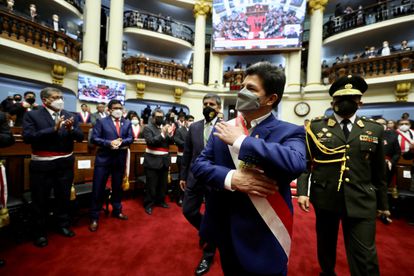 The President of Peru, Pedro Castillo, at the Congress headquarters, in Lima, on July 28, 2022. ERNESTO ARIAS/PERU CONGRESS (via REUTERS)

The confrontation between the parliamentary majority of Peru and the Executive has completed a year with one more dispute, in which President Pedro Castillo has lost: Congress did not authorize his trip to Colombia to participate this Saturday and Sunday in the transmission activities of I send.

In the debate, the opponents argued that the former rural teacher would not represent the Nation well abroad -since he faces five tax investigations linked to corruption- and that he could escape or seek asylum. The former union leader came to power supported by an orthodox leftist party and allied himself in the 2021 runoff with the progressive left, but he has cut those ties this year, and projects himself as a conservative populist who vindicates the less favored sectors.

The vote against allowing his trip was led by the Fujimori Popular Force -the conservative formation with the largest number of seats (24)- and other right-wing factions such as Renovación Popular and Avanza País. the majority of the Alianza para el Progreso and Acción Popular benches, which tend to vote divided by internal fractures or because they negotiate one by one with the Executive, were also against the authorization to travel to Colombia. There were 67 votes opposed to giving the authorization.

On Thursday morning, the attorney general, Patricia Benavides, questioned Castiullo regarding his alleged improper interference in the 2021 military promotions, one of the five cases linked to corruption in office that he faces. According to one of his lawyers, Benji Espinoza, the president used his constitutional right to remain silent and denied the charges against him. The other investigations for influence peddling for the state-owned PetroPerú to choose a company in a biodiesel purchase for US$ 74 million, an investigation for influence peddling and aggravated collusion in the bidding for a million-dollar public work in the Amazon , known as Tarata Bridge.

During the debate on the travel authorization to Bogotá, some parliamentarians argued that Castillo should not leave but face “a cabinet crisis”, because on Wednesday the president of the council of ministers, Aníbal Torres, presented his letter of resignation. Although Castillo has not yet accepted it, on Wednesday he told the press that this Friday he will appoint the new prime minister, and will make more changes in his team. 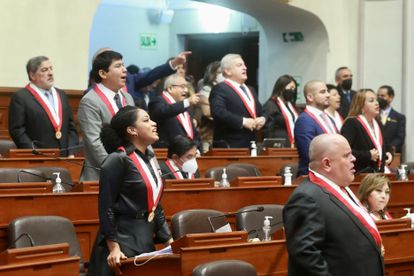 Opposition lawmakers react to Pedro Castillo’s State of the Nation speech, in Lima, on July 28, 2022. ERNESTO ARIAS/PERU CONGRESS (via REUTERS)

The parliamentarians of the Free Peru and Magisterial Bloc groups, related to the president, pointed out that Congress should approve the trip because there is no risk of flight, because Castillo has presented himself to the Public Ministry to face the investigations. “Here there is no longer the presumption of innocence, there is no longer due process: the holy inquisition has been established in Congress: this is hate at its best because taking away a person’s right is the argument of hate,” questioned Congressman German Tacuri, from the Magisterial Bloc.

The internationalist Óscar Vidarte commented to this newspaper that the rejection of the presidential trip is strange and was seen since the government of Alejandro Toledo, in the early years of the 2000s. “It is serious because the internal crisis ends up impacting the interests of Peru international level”, indicated the university professor. Vidarte stressed that it is not new that the continuous political crisis that Peru is going through negatively affects foreign policy, as happened last month, when Congress voted against holding the OAS general assembly in Lima because the organization implied placing toilets “neutrals”.

The next day, Foreign Minister César Landa sent a letter to the president of Congress to explain that these were services that people of any gender or people with disabilities could enter. This, added to the scandal over the refusal, led Parliament to process a reconsideration of the vote, in which it was approved that Lima be the venue in October.

From the Executive we have always respected the independence of the powers of the State. I regret that, in an unusual and arrogant way, the @congresoperu prevent me from attending an international protocol act. This fact undermines the democratic ties with the sister Republic of Colombia.

According to a former senior congressional official consulted by Infobae, although the Legislature denied then-President Toledo a travel authorization, in a second “reconsideration” vote it was approved.