The Prosecutor’s Office encourages confession in corruption by asking for low sentences for Marjaliza, the first great repentant 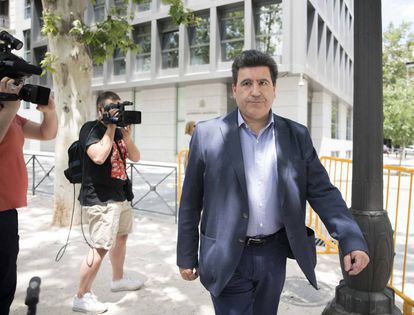 The builder David Marjaliza, at the exit of the National High Court in an appearance in 2019. INMA FLORES

Collaborating with justice is profitable. This is what the Anti-Corruption Prosecutor’s Office wanted to make clear in its first indictment against the builder David Marjaliza, confessed ringleader of the Púnica case and the first major repentant of corruption in Spain. In part six of this macro-summary, which investigates the alleged rigging of public contracts in a dozen town halls in favor of the energy efficiency company Cofely España, the Public Prosecutor’s Office asks the businessman for 13 years and three months in prison for eight crimes, including aggravated money laundering and belonging to a criminal organization, after applying the highly qualified extenuating circumstance of confession.

In the brief, to which EL PAÍS has had access, the Prosecutor’s Office highlights that the businessman has maintained “proactive collaboration behavior with the Justice” during much of the investigation of the case and that this “has allowed to promote and expand the investigation ” throughout the summary. The trial for this piece, whose oral hearing has not yet set a start date, will foreseeably be the first that Marjaliza faces and, therefore, the one that marks her judicial future. The builder is imputed in four other pieces of the macro-summary, according to detailed sources of his defense.

In its writing, Anticorruption makes a positive assessment of Marjaliza’s repentance. Thus, it highlights that the builder began to collaborate “at an early date”, June 2015, when only eight months had passed since his arrest and the case was still secret, so he did not know the content of the legal proceedings or the evidence collected. against him. This is one of the conditions included in the Penal Code to apply the highly qualified mitigating circumstance.

The Prosecutor’s Office indicates that, since then, this collaboration of the businessman “has been translated into writings, documentary evidence and various judicial declarations, confessing the criminal acts in which he and the instrumental employees of his companies have participated.” And he adds that, in his testimonies, Marjaliza has always tried to exculpate these workers from responsibility in order to assume it himself, by assuring that they had acted “always complying with his instructions.” These three employees, also accused in the case, have followed the path of their boss and have admitted the facts, for which the Prosecutor’s Office asks that they also apply the mitigating factor qualified in their indictment.

In this way, the Prosecutor’s Office accuses the builder for the Cofely plot of eight crimes, in six of which it asks for prison sentences, but in none of more than three years, which reduces the effective fulfillment of the sentence to a maximum nine years (three times the maximum sentence). Marjaliza has already spent 14 months in preventive detention after his arrest in October 2014. Thus, in the crime of aggravated money laundering, the six years that the Penal Code sets for this criminal figure, the Anti-Corruption accusation reduces to three. The same occurs with the penalties for the crimes of bribery and belonging to a criminal organization.

In the letter, the public ministry also asks the court to assess the confession of three other defendants, linked to the Cofely company, for admitting the crime of bribery, although in their case only as a simple mitigating factor, since they took the step when the cause it was no longer secret and, therefore, they knew the evidence against them. This means that the sentences that the Prosecutor’s Office requests for them for the same crimes as Marjaliza are greater. Thus, in the crime of bribery, it reaches four years and five months in prison and in that of belonging to a criminal organization, four years.

In part six of the summary of the Púnica case, for which Judge Manuel García-Castellón has already issued the order to open an oral trial, Marjaliza will sit on the bench of the accused together with nine former mayors of the Community of Madrid and Extremadura —seven are from the PP, one from the PSOE and another from the local party Unión Demócrata Madrileña (UDMA)— and another 27 people for the alleged irregular awarding of contracts by nine consistories to Cofely, to which the bench is also sent as a legal person. The instructor calculates that the contracts under suspicion add up to more than 224 million euros, which makes this part of the investigation the largest fraud of the entire macro-cause. The commissions that Marjaliza received for them are close to two million euros, according to the Prosecutor’s Office.

In its letter, Anticorrupción explains that “after the crisis in the real estate sector, the defendant David Marjaliza continued to make profitable the network of contacts and influences woven since 2000 with mayors, councilors and councilors of certain towns in the southwestern area of ​​Madrid” thanks to the friendship he had with the other alleged ringleader of the plot, Francisco Granados, who was a counselor to Esperanza Aguirre in the regional government and general secretary of the PP in Madrid. In this way, the builder “became a ‘contractor’ for third-party companies, who signed with their companies, Real Estate Logistics Service or Aruba Management, consultancy and collaboration contracts that instrumentalized the payment of the commissions committed to the municipal authorities, to ensure the award of contracts, and the payment of intermediation of the accused businessman. Among these companies was the mercantile Cofely España”, emphasizes the text.

The beginning of the investigations into the Punic plot, in the summer of 2014, “coincided with hyperactivity as a broker and commissioner of the defendant David Marjaliza for Cofely Spain,” the letter adds. From there, it details the amount of evidence in the form of telephone conversations, emails and documentary evidence collected on the actions of the directors of this company and the builder in the municipalities of Torrejón de Velasco, Moraleja de Enmedio, Parla, Alcalá de Henares, Valdemoro, Collado Villalba, Móstoles, Serranillos del Valle (all of them in the Community of Madrid) and Almendralejo (Badajoz). In exchange for facilitating the award of these contracts, Marjaliza and Cofely directors gave different gifts to mayors, councilors and technicians of these consistories, most of them in cash. The Prosecutor’s Office highlights that these illegal commissions were greater in the municipalities of Parla and Móstoles, governed by PSOE and PP respectively, where the plot was forced to haggle over the amount of the same and split the deliveries due to their high amounts.

Heat is already a risk if you work outdoors, but plans for extreme episodes are lacking