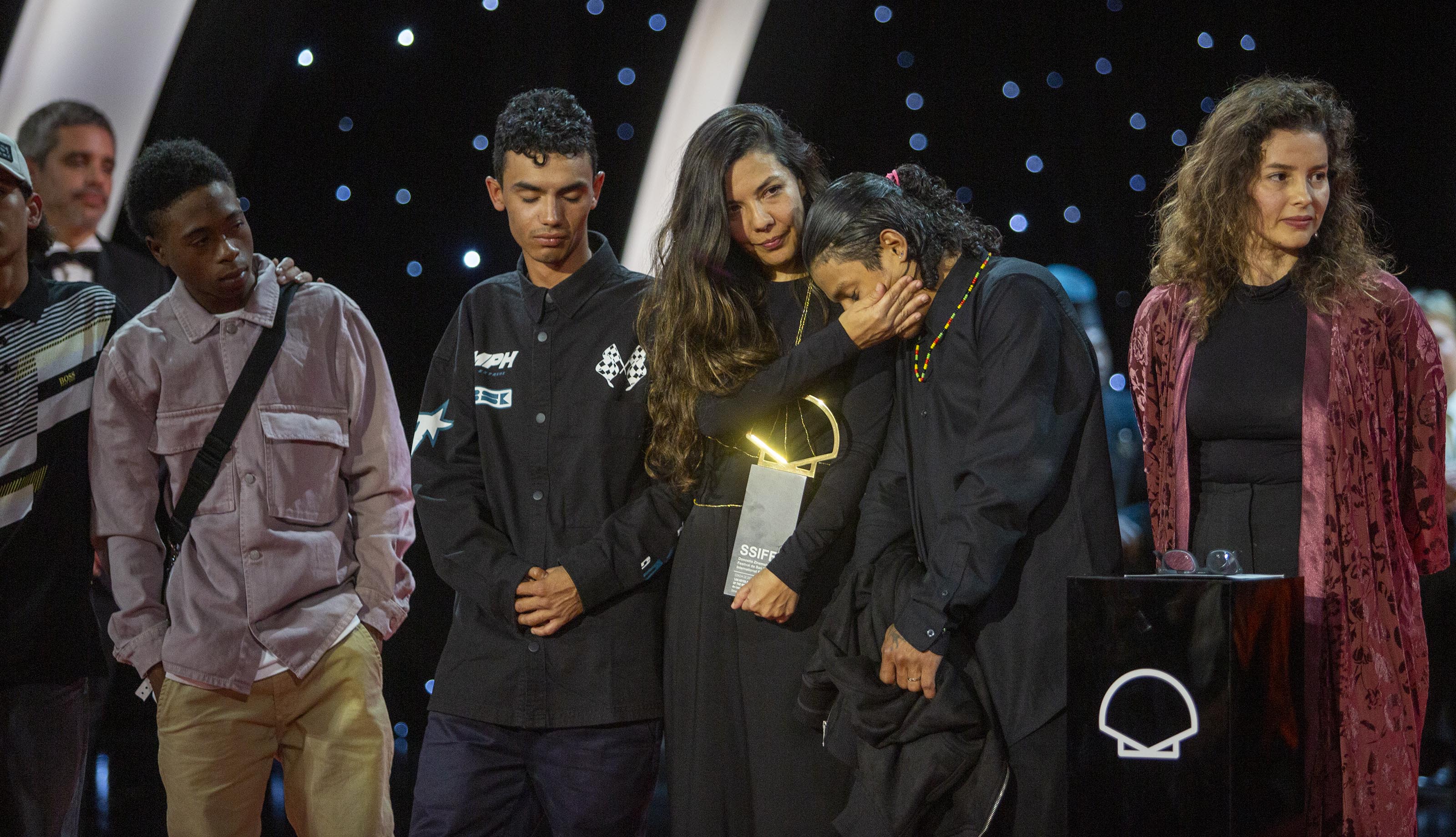 The Kings of the World, the second feature film by Colombian Laura Mora, has been crowned with the Golden Shell at the 70th edition of the San Sebastian Film Festival. From the very day of its screening, this road movie about the search for the lost paradise, that promised land that a group of boys from the streets of Medellín stubbornly pursue, was among the favorites in the official section of the event. It is a film of contagious vitality, set against the political backdrop of those displaced by the armed conflict that Colombia has experienced for decades. Full of beautiful moments, such as that of a jungle road crossed at full speed by some kids on bicycles tied to a truck by a rope or the dance of the five with some old prostitutes, Los reyes del mundo portrays the endogenous violence of Colombia from the perspective of a director who in her first film, Matar a Jesús (2017), delved into the heartbreak caused by the murder of her own father at the hands of a hitman.

The five boys in the film, natural actors recruited from the fringes, take over the screen with their beautiful momentum. Some homeless people hooked on glue and pills who want to find a new opportunity on the piece of land belonging to the grandparents of one of them, a lost place that the boy has managed to reclaim from the State. Shot in Bajo Cauca Antioquia by a mostly women team, The Kings of the World is dazzling in its journey to its origins but also in its way of embracing its characters and avoiding gratuitous blood. From his inevitable pessimism, the brotherhood of a group of friends prevails willing to recover lost dignity in their search for a new El Dorado.

The special prize of the jury, the second in importance and also uncontested, went to Runner, the debut work by the American Marian Mathias. Concise in its 76 minutes, with hardly any dialogue, the film embarks the viewer on a landscape of grays and browns in which a child who has just turned 18 carries the leaden legacy of a bankrupt and sick father. The plasticity of the film, its way of evoking a painful and fractured interior landscape through fixed shots, is remarkable.

Another debut, the Japanese Hyakka (A Hundred Flowers), by Genki Kawamura, has won the Silver Shell for best direction for a mother-daughter story about memory loss that, through long sequence shots, confronts a Alzheimer’s mother with a son trapped in childhood trauma. The ex aequo award for the best performance went to two very young performers who have stepped into the shoes of two kids forced into an abrupt clash of maturity. Spanish newcomer Carla Quílez has surprised with her furious work in La Maternal, Pilar Palomero’s film about teenage motherhood. Quílez exudes truth in her portrayal of a girl, as stubborn as she is wounded, confronted with her problematic bond with her own mother through the pain of early motherhood. Paul Kircher, son of actress Irene Jacob and with more experience behind him, takes over the screen with force in Le lycéen, in which the French Christophe Honoré recreates the traumatic trance of the premature loss of his father .

The award to the girl Renata Lerman for her work in Argentina’s El suplente falls within the anecdotal, such as highlighting the photography of a film as minor as Pornomelancolía. The conventional Chinese drama Kong Xiu (A Woman) scored the best screenplay. They were the three worst decisions of the jury chaired by Argentine producer Matías Mosteirín and made up of French casting director and filmmaker Antoinette Boulat, Danish director and screenwriter Tea Lindeburg, Lesotho filmmaker and visual artist Lemohang Jeremiah Mosese, director and screenwriter Icelander Hlynur Pálmason and the Spanish journalist and writer Rosa Montero. The American actress Glenn Close, president of the jury at first, fell out of the group days before the contest began due to a serious family matter. It was a jug of cold water for a sunny festival that opened and closed with two rainy days.

Palmarés and other festival awards

Gold Shell: The kings of the world, by Laura Mora.

Latin horizons: I have electric dreams, by Valentina Mauriel.

Youth Award: I sing to books and women, by María Elorza.