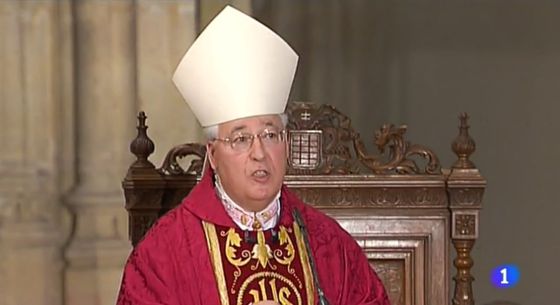 The Pope has accepted the resignation of the bishop of Alcalá de Henares, Juan Antonio Reig Plà, and has appointed the until now auxiliary bishop of Madrid, Jesús Vidal, apostolic administrator of this diocese, as reported by the Spanish Episcopal Conference (CEE) after the communication of the Apostolic Nunciature. Known for his controversial views on homosexuality —he proposed a guide to cure it and linked it to pederasty— or euthanasia—he accused the parties that approved the dignified death law of turning Spain “into an extermination camp”— or For giving mass with a pre-constitutional flag in the background, he has been directly retired by Pope Francis, becoming bishop emeritus, according to media such as InfoCatólica and Religión Digital.

They also highlight the closeness of Jesús Vidal to the Archbishop of Madrid, Carlos Osoro, who represents a more moderate ecclesial current, far from the positions of Reig Plà and more aligned with that of Pope Francis. Reig Plà, 75 years old, presented his resignation by letter to the Pope last July, something mandatory for bishops when they reach the age of prelate. And Francis has accepted it relatively quickly, because on other occasions the bishops can stay in office, even years after the forced resignation.

The already bishop emeritus was appointed bishop of Alcalá de Henares on March 7, 2009 and took possession of the diocese on April 25 of that year. He was born on July 7, 1947 in Cocentaina (Alicante), diocese of Valencia. He studied ecclesiastical studies at the major seminary of Valencia, where he obtained a baccalaureate in Theology in 1970. He has a degree in Sacred Theology from the Pontifical University of Salamanca (1973) and a doctorate in Moral Theology from the Pontifical Lateran University of Rome (1978).

He was ordained a priest in Valencia on July 8, 1971. On February 22, 1996 he was appointed bishop of Segorbe-Castellón. He received episcopal ordination on April 14 of the same year. On September 24, 2005, his appointment as bishop of Cartagena, a diocese of which he took office on November 19, was made public. In the Spanish Episcopal Conference, he is a member of the Episcopal Commission for the Laity, Family and Life.

For his part, the new apostolic administrator, Vidal Chamorro, was born on May 6, 1974 in Madrid. He has a degree in Economic and Business Sciences from the Complutense University of Madrid. After completing these studies he entered in 1997 the conciliar seminary of La Inmaculada y San Dámaso, in Madrid. He was ordained a priest on May 8, 2004. In 2007 he obtained a licentiate in Theology, specializing in Moral Theology, from the San Dámaso Ecclesiastical University. On December 29, 2017, his appointment as auxiliary bishop of Madrid was made public, assigning him the titular see of Elepla, which had Seville as metropolitan. He receives episcopal ordination on February 17, 2018. In the Spanish Episcopal Conference he has been president of the Episcopal Subcommission on Seminaries since March 2020.