The feeling of suffocation on set was real: a musty smell, wet mud, a huge crack in the dark and the models walking on puddles that splashed the front rows with their celebrities and also stained the bottoms of the denim that is always present in Balenciaga, the oversized clogs and the trains of the tight evening dresses now, in their now classic pink, silver and black.

Fashion needs no explanation, everyone must judge for themselves. This is said by the man who has most conceptualized fashion in recent years. Demna, designer and revivalist of Balenciaga, has presented this Sunday in Paris a collection for next spring in a mudflat, the work of Spaniard Santiago Sierra, to simulate the process of creative excavation in search of ideas to which the Georgian undergoes each season . “I don’t want to explain the collection. It is a reflection on my work as a designer, but also on luxury: What is luxury? A cashmere sweater? Surrounding the collection with clay speaks of this reflection, it is almost blasphemy, but it makes it real”, he assured backstage after the parade. Subverting what luxury means, streetwear, the new, the neat and the dirty is the main idea of ​​this collection that continues its trajectory of perverting the imaginary of luxury as it did with the Ikea bag or the checkered bag from bazaar of everything at 100. “I hate boxes and labels. As a society we label, especially from the internet”. The boxes, the famous cognitive biases, serve to make us feel safer, but that is not what Demna is looking for.

“The show talks about the exact moment we live in. We are all going somewhere, we don’t know where”, explained the designer moving his speech in the abstract, without citing explicit references or explanations. However, for the viewer to draw their conclusions, at least a bit of context is needed: the artist Santiago Sierra presented in 2005 in the German Hannover his installation House in mud, 120 kilos of mud to emulate the construction of an artificial lake during the Nazi regime. Sierra intended with this work to reflect on human exploitation, power and authority and now replicates something similar in the Nord Villepinte exhibition park in Paris.

The overwhelming stage, the invitation to the parade —which consisted of an aged wallet with documentation, purchase receipts, health card, credit card and even some coins—, and the dirty Converse that Balenciaga put up for sale a few months ago for almost 2,000 euros to the rapid indignation of social networks, they immediately referred to two ideas: What objects are people capable of paying for? How is desire generated? And, at the same time, it was impossible not to think of other questions: How do cities look after being razed to the ground? What would you take with you if you had to run away from home? How do your belongings, your bag, your All Stars look after walking a long way?

It is nothing new that Demna bases many of his creative ideas on his own experience as a refugee. And it seems that he has done it again. In the parade there were bags in the form of dirty old children’s stuffed animals, men with their babies in backpacks and carrying bags that revealed their contents, which were the basics. In contrast to the always oversized silhouette of Balenciaga, a series of small puffer jackets appeared, as if they did not belong to those who wore them. The garbage bag bag and the potato bag bag also referred to a hostile trip. A key could be glimpsed in the hairstyle of a model, the object where the refugees, all of them, place their hope. “Are you optimistic?” they asked. “Right now I’m not optimistic, but I do have hope,” he replied. Because we’re all going somewhere, yes, but some journeys are darker.

It is understandable that some people find the topic of current affairs as a shaper of fashion collections tedious and repetitive, but it is a creative mission. There are others. For those who consider that fashion should be an escape, or a refuge for beauty and joy, at last Friday’s parade of Issey Miyake, the first since the creator died last August, a phrase was projected, to applause from Japanese: “I think there is hope in design. The design evokes surprise and joy in people.” The collection, made by Satoshi Kondo, summed up all the great milestones of Miyake: derivations of his pleats in different dimensions and fabrics, rigorous black, geometric prints and bright colors. The ending, with a dance and the models running, revealing the free movement and fluidity for which Miyake’s designs are known, translated hope in a way opposite to that of Balenciaga. 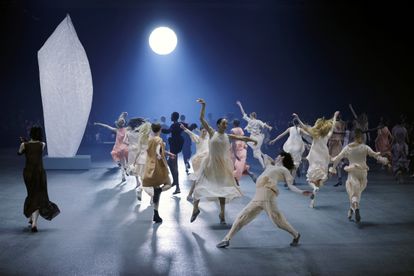 Parade of the collection for the next spring of Issey Miyake, on September 30 in Paris. JOHANNA GERON (REUTERS)

Hermès also showed a cheerful proposal on Saturday that played with the colors of the sunset in an imaginary rave in the desert as a supposed finish to an excursion through the mountains. The collection mixed layered silk dresses and other die-cuts of ultra-light leather with technical fabrics. Nadège Vanhée-Cybulski brilliantly used ropes, elastics and closures from sports or climbing clothing that she fully integrated into her classic elegance. Something like the usual use of quincaillerie, hardware pieces, common in the French house.

Four of Hermès’s proposals, at the parade of its collection for spring / summer 2023 on October 1 at Paris fashion week. JULIEN DE ROSA (AFP)

The path continues, life advances, technology is surpassed, but sometimes the gaze goes backwards. In a performance display, the Coperni duo, formed by Sébastien Meyer and Arnaud Vaillant and which takes its name from Nicolaus Copernicus, created a dress on the body of Bella Hadid live. The model, naked, emaciated and practically inert, endured for almost 10 minutes that two men, workers from the Coperni workshop, sprayed her with spray before the audience. It was, without a doubt, one of the viral moments of the week. It generated surprise and emotion in part of the public and discomfort and skepticism in the other. The fabric, created by the Spanish Manel Torres, is called Fabrican and it is not new. The choice of a very thin model with a passive attitude made it inevitable to reflect on the role of women in this industry. It is also inevitable to think of the performances by Marina Abramovic, Ritmo 0, and Yoko Ono, Cut Piece, where the artists offered their bodies so that the public could do what they wanted with them. The results were sadistic: as Abramovic explained, the interaction started out friendly and ended in aggression. 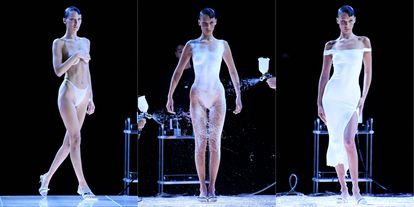 Bella Hadid, in three of the moments while a dress was being made for her live during the Coperni fashion show, on September 30 at Paris Fashion Week. JULIEN DE ROSA (AFP)

“It’s our celebration of the silhouettes of women from centuries past,” the duo said after the show. They were referring to the clothes, because the silhouettes of the women, except for the two usual exceptions, were the same as in the rest of the parades (except for Ester Manas): scrawny.