The origin of the giraffe neck could be sexual 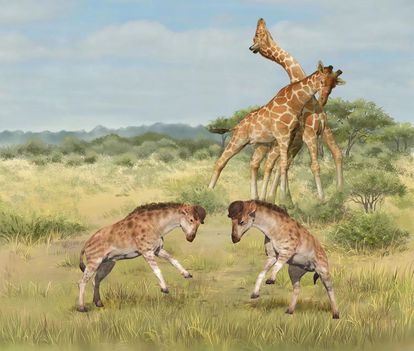 At almost six meters long, giraffes (Giraffa camelopardalis) are the tallest land animals among living species. The classic explanation for its long neck is that the selective pressure for food would have favored the highest specimens, which reached leaves that the rest of the herbivores could not. Now, the discovery of a fossil of a close relative of G. camelopardalis reinforces another hypothesis that has been a minority until now: sexual selection. The males of this giraphoid had a head and neck morphology that made them unique by headbutting each other when competing for females. For its discoverers, the extreme behavior of this distant ancestor could explain the evolution of giraffes.

Giraffe neck elongation has been an evolutionary mystery for centuries. Although there have been different opinions about how the process went, the scientists always pointed to the highest leaves of the trees. The two pioneers of evolution, the Frenchman Jean-Baptiste Lamarck and the Englishman Charles Darwin, used this animal to explain how species evolved. It was the Gaul who, at the beginning of the 19th century, maintained that giraffes, in their eagerness to reach the highest leaves, lengthened their necks generation after generation, a trait that ended up being inherited. Years later, Darwin would turn it around: by chance, in each generation some giraffes would have longer necks, which would give them an adaptive advantage, prioritizing their reproductive success, meaning that, in the long run, they would all have long necks.

However, the better understanding of the behavior of G. camelopardalis by current scientists has paved the way for an alternative to the classical explanation: the elegant and long neck of giraffes actually serves as a weapon in male courtship competition and this could be the key to the evolutionary mystery of giraffes. Specifically, they use their two to three meter long neck as a catapult for their head equipped with ossicones (skin-covered bony protrusions). Its impact on the weakest parts of its rivals usually causes serious injuries and even death. Sexual selective pressure would be evident: the longer the neck, the greater the damage.

The discovery of a close relative of giraffes that lived about 17 million years ago in the Junggar basin (in northwest China) strengthens the sexual hypothesis. They have named it Discokeryx xiezhi. The former literally means disk-horn. The xiezhi that inspires the surname of this newly discovered species is a figure from Chinese mythology with a horn on its head. In the case of this giraphoid [no son antecesores directos de las jirafas, los jiráfidos], the most striking feature is a kind of helmet or beret in the shape of a disc in the central area of ​​the head. Formed by the hardening of the keratin of the skin, it was a structure for the fight of the males, headbutting each other. The authors of the study, just published in Science, write: “D. xiezhi was able to exhibit the most ferocious behavior among all ruminants.”

The ferocity of the headers has its mechanical basis. The authors of the study analyzed the cervical vertebrae, the exaggerated thickness of the skull bones, the intervertebral joints and the atlanto-occipital joint (which provides mobility and at the same time support between the head and the spine) of D. xiezhi. Then they compared them with the morphology of three current species of ruminants that stand out for the strength of their bones, the musk ox, the blue sheep and the mouflon. After carrying out a series of experiments, they conclude that the resistance and energy absorption capacity exceeds between one and five times that of other animals with defenses on their heads.

But what do the head butts of D. xiezhi have to do with the neck of G. camelopardalis? Shi-Qi Wang, a researcher at the Institute of Vertebrate Paleontology and Paleoanthropology of the Chinese Academy of Sciences and lead author of the research, explains: “Both current giraffes and Discokeryx xiezhi belong to the Giraffoidea superfamily. Although their skull and neck morphology are very different, both are related to male courtship fighting and the two species evolved in an extreme direction.”

To reinforce their thesis, the authors analyzed the morphology of the known giraffes, the two existing ones (giraffe and okapi) and more than a dozen extinct ones. Wang and his colleagues show that there are at least 14 different types of hooves on giraffes and their close relatives. To compare so much diversity, bovids (goats, mouflons, antelopes, bulls…) have five different types of horns, and even cervids (moose, crows, fallow deer…) have only nine types of horn structures. This greater variety would indicate a genetic plasticity that other ruminants lack.

“It has been very difficult for traditional giraffe researchers to accept the idea that sexual selection played a role in the shape and length of their necks.”

Rob Simmons is a researcher at the University of Cape Town, South Africa. He has spent years defending the thesis of sexual selective pressure. “You have to keep in mind that it has been very difficult for traditional giraffe researchers to accept the idea that sexual selection played a role in the shape and length of their necks.” Simmons, who was not involved in Wang’s study, argues that “this analysis opens that door, showing that if the morphology of ancestral giraffes can be explained by sexual selection, then that of the modern giraffe can be explained by the same idea.”

Simmons, together with his colleague R. Altwegg, reviewed all the hypotheses about the neck of giraffes in a paper published a few years ago. “We saw that we cannot easily distinguish them,” he explains in an email. Why? “Because the evolution of a morphological trait consists of two parts: (i) the incipient stages that promoted the evolution (a change of climate, of competitors/predators, a sudden mutation that allowed new paths…) and (ii) the trait maintenance. Current evidence can easily show how the trait is maintained, and some experiments […] show that the giraffe can outcompete other folivores when feeding on tall trees”, he details. But his own research points in the other direction. “It’s not just that larger-necked males are chosen by receptive females to mate with, they show allometric growth. [cambios relativos en una parte del cuerpo respecto del total] in their necks (four kg of muscle per year) and in their heads (one kg of bone per year) and the females do not. In them, they stop growing when they reach sexual maturity. This is what the sexual selection theory predicts,” he concludes.

It remains to clear another common question. If competition between males is the key, why does the female’s neck lengthen as well? Responds Ted Stankowich of California State University, Long Beach: “There are a few reasons why females may carry cranial defenses (antlers, horns) that evolved primarily for sexual combat between males. In bovids, females have horns in species that are more visually exposed to predators. They are also found in species where the females participate in active defense of the territory,” he says. As for the giraffes, “this may be valid if the females also defend territories from other females or if they use them to defend themselves against predators”, he completes. Precisely, this group, from which the current giraffe originates, emerged about six million years ago, when large areas of the African jungles became savannahs, with the dangers posed by open spaces.

“The preservation of each species [o rasgo] can rarely be decided by an advantage, but by the union of all, large and small “

Charles Darwin, father of the theory of evolution

All this does not mean that advocates of selective pressure to reach the highest leaves are wrong. Wang, the main author of the research with D. xiezhi, remembers this: “I think that both the fighting between the males and the search for food intervened in the elongation of the neck, but in different ways. the okapi [pariente más cercano] they also fight with their short necks, but not as fiercely as giraffes. The ancestor of the giraffe was similar to the Okapi, both in neck morphology and fighting style. The ancestral giraffe left the forests and entered the savannah grasslands. Males might fight using their necks more and more fiercely, getting longer and longer. Finally, it became the giraffe it is today and reached the highest leaves.”

Simmons, from the South African university, sums it up very well: “What we don’t know is what started this whole process. Did an ancestor of the giraffe start fighting with its shorter neck and develop longer, stronger necks from there, or did the expansion of grasslands in the Pliocene reduce the ability of short-necked ancestors to reach trees now? tallest and only the longest-necked animals could survive the food shortage?” And he concludes by remembering Darwin: “The great teacher and grandfather of the theory of evolution, Charles Darwin, said these wise words more than 100 years ago: The preservation of each species [o rasgo] it can rarely be decided by an advantage, but by the union of all, great and small”.

“You put a lot on me and it went away”: the confession of a rape by WhatsApp