The number of large defaulters with the Treasury is reduced: 7,037 taxpayers owe 17,700 million 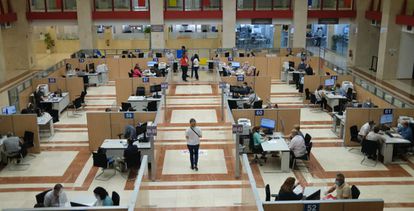 Both the number of debtors and the amounts they owe have been reduced in the list of large defaulters with the Treasury published this Thursday. The total debt falls by 2.9%, to 17,700 million compared to 18,200 in the December edition; the number of debtors decreased somewhat more, by 3.3%, to 7,037 taxpayers. The document, published this Thursday by the Tax Agency, includes all those individuals and companies that had pending debts and sanctions with the treasury of more than 600,000 euros as of December 31, 2021.

This Thursday’s is the ninth list of large debtors with the Treasury that has been released, but it is only the second drawn up with the more severe rules established in the new law against fraud that came into force last year. Natural persons are 1,387 and owe 2,125 million euros ―in the December edition they were 1,367 for 2,081 million―; companies are 5,650 and owe 15,585 million, compared to 16,150 million in the previous list.

The Tax Agency began to disclose the list of large defaulters with the treasury in 2015, with Mariano Rajoy (PP) at the Government and Cristóbal Montoro at the head of the Ministry of Finance. Its objective was (and is) mainly dissuasive, due to the reputational damage that appearing in a document of this type can cause. Until 2021, it was published once a year, and included individuals and legal entities that had pending obligations with the Tax Agency of more than one million euros.

This threshold has been lowered to 600,000 euros with the new law against fraud, in force since last July and one of the elements that the Government has incorporated into the Recovery Plan to unlock European funds. The regulations establish that for the first time, in addition to the main debtor, the name of the joint and several administrators of the delinquent companies is also included. Those taxpayers with deferred or suspended debts because pending resolution or judgment continue to be excluded.

The Tax Agency clarifies that, in relation to 3,566 main debtors, derivations of subsidiary or joint and several liability have been made to third parties for more than 6,506 million, which corresponds to 37% of the total amount. In addition, it underlines that once the duplicities are subtracted, the amount owed in this list would be 14,567 million, 4.2% less than the December list, once its duplicities were also eliminated.

The first blacklist drawn up according to these new requirements was published at the end of last December, with a resounding rise in the number of delinquent ―88%―, effect of the reduction of the threshold to appear on it. The total amount of debt also rose, although to a much lesser extent: the increase did not reach 30%. That list included the names of individuals and companies that owed more than 600,000 euros to public finances as of August 31, 2021.

What has not changed, despite the new rules, is the composition of the list, which for years has become a parade in which famous people such as athletes and actors, businessmen and former politicians, large companies and to public administrations. A relevant weight continues to be occupied by personalities and firms linked to the real estate sector. The bursting of the bubble was a point of no return for many promoters, real estate and construction companies, which have ended up becoming zombie companies that swell the black list of the Treasury: despite not having activity, they maintain enormous debts with the treasury for more than a decade after the brick crisis broke out.

38% of the total amount, 6,787 million, corresponds to debt of defaulters in bankruptcy proceedings (2,067 taxpayers, 29% of the total), an amount somewhat lower than that which appeared in the previous list. This means that the possibilities of effective collection of these amounts by the treasury are limited for the duration of the bankruptcy process itself. On the other hand, up to 580 debtors who appeared on the December list and owed 1,164 million do not appear on this list – it may be because their debt has been totally or partially canceled or they have obtained a deferment or suspension -, but they enter the list 340 taxpayers for a debt of 636 million.

Fantic brings two-cylinder to the EICMA: Ténéré-Twin for big Caballero?