The new Latin American route of the frigate ‘Mercedes’

The last voyage of the frigate Santa María de las Mercedes began in 1803 and ended a year later at the bottom of the Gulf of Cádiz. La Mercedes left the port of Ferrol with a mission: to recover the funds gathered in the overseas viceroyalties during the years of war and bring them back to Spain. The route included Lima and Montevideo, with a stop at Cape Horn, in Chile. When she only had one day of sailing left to reach her destination, an unexpected British attack blew her up. The ship sank with her treasure. 275 crewmen died and 600,000 silver coins were lost. Two centuries later, and after having recovered the ship’s cargo, the Spanish Government has proposed to Mexico, Colombia, Peru, Bolivia, Chile and Uruguay that the Mercedes and its history return to tour Latin America.

The proposal comes from the Spanish Minister of Culture, Miquel Iceta, who considers that it is time to tell this common story beyond the international lawsuit with Odyssey, the treasure hunter who plundered the Mercedes and who was forced by the US courts to return the goods to Spain. “This galleon is a Spanish-flagged ship and international legislation says that it is the property of Spain, but of course, those coins were minted in Latin American countries, they circulated in Latin America, the metal with which they were made came from mines in Latin America. Latin. And we said: is it not possible to draw up a project that unites us all? Could seven countries make a common story and, if I may, a common exploitation of that?”, Iceta told EL PAÍS.

The politician has taken advantage of the congress of a hundred Ministers of Culture in Mexico City, within the framework of Mondiacult 2022, to present the project to the six countries. In two days he has concentrated all the meetings. So far, the response has been positive: “It seems that there is water.” Iceta points out that the reactions have been surprising, because they had not discussed the topic before the face-to-face meeting, and also of interest. The Spanish minister has stated that the Director General of UNESCO, Audrey Azoulay, has also advanced support for the project.

“For the first time, cooperation has been sought from the beginning. And everyone has told us: ‘Let’s go see it’”, pointed out Iceta, who affirms that Spain has not arrived with a single written paper, but with an idea to develop “together”. “This can be the symbol of a new way of working. Until now, everything was disputes about this is mine, it’s my coasts, it’s my ship, it’s my dead, it’s my coins. On the other hand, I believe that there is the possibility of saying that this involved us all at a very specific moment in history and therefore forms part of our stories; it belongs neither to one nor the other: it belongs to everyone”, the socialist politician has presented, assuring that they have been very “prudent” in presenting his proposal.

La Mercedes leads to a sensitive historical moment in Latin America, especially in countries like Mexico, where the government of Andrés Manuel López Obrador has made the Spanish conquest a symbolic enemy. The Minister of Culture, who recognizes that Spain is still wrong when using terms such as the discovery of America —since they were already civilizations that existed before the arrival of the Spaniards— points out that “history cannot be changed”.

“It is not possible to explain the history of Spain without the Latin American dimension or the Latin American countries if you try to erase that Spanish presence. Therefore, what are we to do? Read it together ”, she has affirmed. The minister refuses to turn this initiative into a “gesture” by Spain but rather as “a pretext, the spearhead of a cooperation that must be extended to all areas”. Although the politician does recognize an explicit “instruction” by President Pedro Sánchez to “strengthen relations with Latin America to the maximum”: “That also means that perhaps we have not done it enough.” 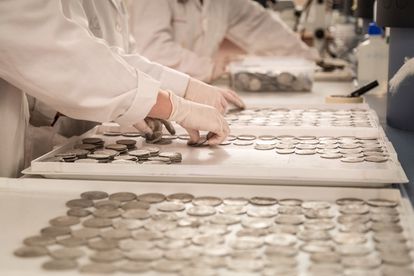 Some of the silver coins recovered from ‘Santa María de las Mercedes’, sunk in 1804. National Museum of Underwater Archeology of Spain

At the moment the format of the project has not been finalized, but everything points to a traveling exhibition that can tour the seven countries and show the recovered objects: the cannons, the vessels or the weapons that traveled in the Mercedes, in addition to the thousands of coins , which are under restoration. Ideally, the Ministry of Culture hopes to be able to present the result next year. The first steps —when the rest of the countries accept— will be to create a technical work commission. “We created this multilateral group and we are building the discourse together, where we all feel comfortable,” says the director of Spanish Heritage, Isaac Sastre.

Santa María de las Mercedes sailed to recover the money collected by the Spanish colonies in Latin America in the last years before their independence. It was a crucial moment in Europe, immersed in the Napoleonic wars, which forced Spain for long periods to suspend communications and travel across the ocean.

In 1802, taking advantage of a peace treaty, Carlos IV gave the order to bring the funds. Four ships took part in the expedition, which undertook the return trip in 1804. After a calm navigation, on October 5, the squadron was interrupted by English ships off the coast of Portugal. A direct cannon shot to the safeguard of La Mercedes makes her explode and sink with her cargo and three hundred crew members on board. The other three frigates were captured. Sastre explains that the British attack —which broke the period of peace and later led to the Battle of Trafalgar— was due to the fear that the amount of money that arrived in Spain could destabilize the political chessboard and tilt support towards France.

Two centuries later the Mercedes returned to all the covers when Odyssey managed to submerge and take the 600,000 coins that it protected. After years of lawsuits, the US justice system agreed with Spain in a historic resolution in 2012. Since then, the Spanish Navy together with the CSIC have organized several expeditions to depths of more than 1,100 meters to recover the last objects that the treasure hunter had missed. he had taken, among those who remained, for example, two culverins. 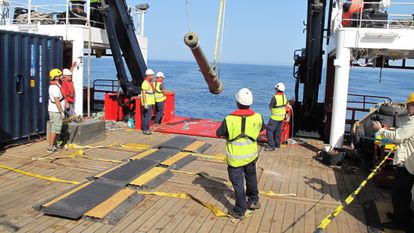 Extraction of a culverin belonging to the frigate ‘Mercedes’ in 2017. Ministry of Culture

The idea is that these objects can be in an exhibition that I traveled as the Mercedes traveled in its day. “The exhibition is going to have an important material support, but it is going to be much more than that: it is going to be how a ship can tell the story of so many peoples, of so many countries”, Sastre develops, “it was the first globalization, where Spain, due to the role it played, was the protagonist”.

Iceta’s arrival in Mexico breaks with a long period without the presence of Spanish politicians in the country. In February, President López Obrador announced that relations between the two countries were freezing: “A pause to respect each other and not see us as a land of conquest. We want to have good relations with all the governments of the world, but we don’t want them to rob us.” However, the Minister of Culture explains to EL PAÍS that these relations, in practice, have never been suspended, and that new joint projects are being prepared. “Spain does not intend in its continued presence in Ibero-America to exercise any type of colonial or cultural paternalism”, said the minister, who acknowledged: “It is true that in Spain at times there has been a neo-colonial or imperial vision, but it is not the current situation and precisely to avoid misunderstandings, the best thing is the maximum and closest relationship possible”.