The narco is merciless against the population in Mexico

To understand how the terror of violence is experienced in Mexico, it is necessary to stand mentally outside a pizzeria in Ciudad Juárez on a Thursday night. Or of those who tried to return to their homes in Tijuana a day later. It is likely that one does not know that a few hours before, a few kilometers from there, in a state prison, a fight between rival gangs, called in this case Los Chapos and Los Mexicles, have been sentenced to death. No one can foresee the chaos that will unfold hours later. And a neighbor goes to a pizzeria for dinner, or to a grocery store, or to put gas in his car, or returns from work on a factory bus, when everything explodes. When the fuse that was lit behind the bars of a prison, governed by everyone except the State itself, extends to the door of his house. And then an entire city becomes a macabre war scene, which is for criminals an open field where they can walk around with bombs and assault rifles, unleashing panic and shooting people at close range, as if they were in a video game.

Thursday’s massacre against civilians in Juárez was not, as President Andrés Manuel López Obrador explained on Friday, an unprecedented case of cruelty against the population. It has happened in recent years in different parts of the country with the same voracity: Reynosa, Fresnillo, Aguililla, Caborca… On Friday afternoon, in a coordinated attack, organized crime set fire to vehicles and blocked roads in the main cities. from Baja California, Tijuana, Tecate and Mexicali. A scene similar to the one that Ciudad Juárez experienced on Thursday and two days before, in Guanajuato and Jalisco. What seems unusual is the number of violent drug acts that have set fire to five corners of the country in less than a week. The front pages of the national press opened three days in a row with the flames consuming businesses, gas stations, trucks, towns surrendered to their power. And with dead. Security forces next to an avenue on Friday night, in Tijuana, Baja California. JORGE DUENES (REUTERS)

On Tuesday, some men dressed as soldiers, who chanted the name of El Mencho —Nemesio Oseguera Cervantes, leader of the Jalisco New Generation Cartel— burst into a store in Guanajuato with gunfire, frightening everyone, not only those who were there, but also those who followed from home on their cell phones the absolute power of drug traffickers in their town. Those men in camouflage and their many armored trucks with cartel prints parked in front of a military barracks and emptied the magazines. But in that store, for three minutes and 30 seconds, there was no other uniform than that of the assassins.

The narco is vicious against the population because he can. That is the message that criminals have sent for decades, but especially in recent years, after the beheading of the big cartels that fragmented crime into mini-cells, local gangs, regional groups, with the same firepower as an entire municipal corporation. , or even state. So that conflicts are no longer produced exclusively for the control of drug trafficking routes to the United States, everything can start with a fight in a prison, with an unpredictable fight between local bosses, hitmen who change sides every week. And this has been reproduced in every corner of the country. In this way, a great coup by the state against drug traffickers is not necessary for them to burn down a city; it is enough that one of them, armed to the teeth, sees fit to subdue innocent people to draw the attention of the police and even the Army and thus temporarily break the business of a rival.

The cruelty against the population is so common that it even has its own term: heating the square. This is what is called in the jargon of drug traffickers, which has necessarily permeated the population, the practice through which a criminal group, large or small, causes chaos in a territory dominated by its rival to attract the armed forces. This includes shooting innocent people, burning down businesses, blocking roads, and as much noise as possible. The objective is for the Army to deploy, for the Government to request that those responsible be found, for there to be a few arrests, and ultimately, for the established criminal order to be broken in order to impose another one later. And so, as many times as the crime considers it.

There are no battle fronts, nor are there clear zones where one knows one is safe. There are some states that escape these levels of terror, such as Yucatan. But in general, the violence in Mexico claims 100 homicides a day and there are more than 100,000 disappeared, more than those caused by the conflict with the guerrillas in Colombia and the repression of the Argentine dictatorship. The plumbing can appear in an exclusive hotel in the Riviera Maya, on a tourist avenue in Playa del Carmen, with the same ease that more than a dozen tortured corpses appear in front of the Government Palace in Zacatecas.

The Government reports every Wednesday on security and on Thursdays, on successful arrests. Each of these attacks are seen as isolated events, as inevitable tragedies. The corruption of the authorities, inequality, poverty, are the leitmotif of each morning conference of the president to justify a government crisis that is complex to resolve. More scholarships for young people, to prevent them from joining the ranks of organized crime, more aid to reduce the bloody gap that keeps half of its population in a situation of poverty. Ambitious measures that do not put an end to violence in the short term. 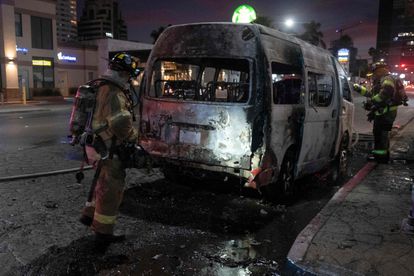 Firefighters work around one of the burned vehicles this Friday, in Tijuana. GUILLERMO ARIAS (AFP)

This week, López Obrador has announced one of his pending reforms, the consolidation of the National Guard as a military body in charge of fighting crime, but also of public security tasks. Despite the fact that the Constitution prohibits the interference of the Army at all levels of citizen security, the president’s party, Morena, already modified it through an agreement with the opposition in 2019 so that, temporarily and until 2024, the new star body was subordinate to the Ministry of Defense. Now he intends that this temporary measure be resolved, for which he must seek a legal loophole, since he does not have a sufficient majority in Congress, and the federal police be extinguished.

The measure, which has been controversial for not having sufficient agreement among members of the opposition and for what it means to assume that the Army will take absolute control of the fight against crime, will not bring about any change in practice. Every corner of the country is strewn with military barracks and armored trucks that patrol the streets more frequently than a municipal police car. The problem is that not even the full power of the Army has been able to control the violence in the last three years.

Declaring open war on drug traffickers is not an option for López Obrador. The country observed the consequences of the battle that the State undertook with Felipe Calderón in 2006 and that Enrique Peña Nieto continued until 2018. The number of extrajudicial executions by the military skyrocketed, as well as the number of homicides among innocent people, and the mass graves corpses began to multiply with force. The worst massacres that the country had experienced occurred in those years. And the president seeks to distance himself from his predecessors with a less aggressive policy. Although attacks against drug traffickers continue to be organized: the attempted arrest of a criminal leader of the Jalisco Cartel was what caused chaos this week in different municipalities in the center of the country.

While security strategies are debated in the offices, an ordinary citizen goes to a pizzeria in Ciudad Juárez on a Thursday night. A woman interviews another young woman in a grocery store who has come to look for work. The first ends up riddled with bullets along with three other people. And the store is set on fire by two Molotov cocktails that the Mexicles group has thrown before unleashing chaos in this border city, the two die inside. The population is their hostage and they, the only ones in charge, until the next attack.

The terrace of the weekend: La Raíz 15, an authentic eating house in a mining orchard