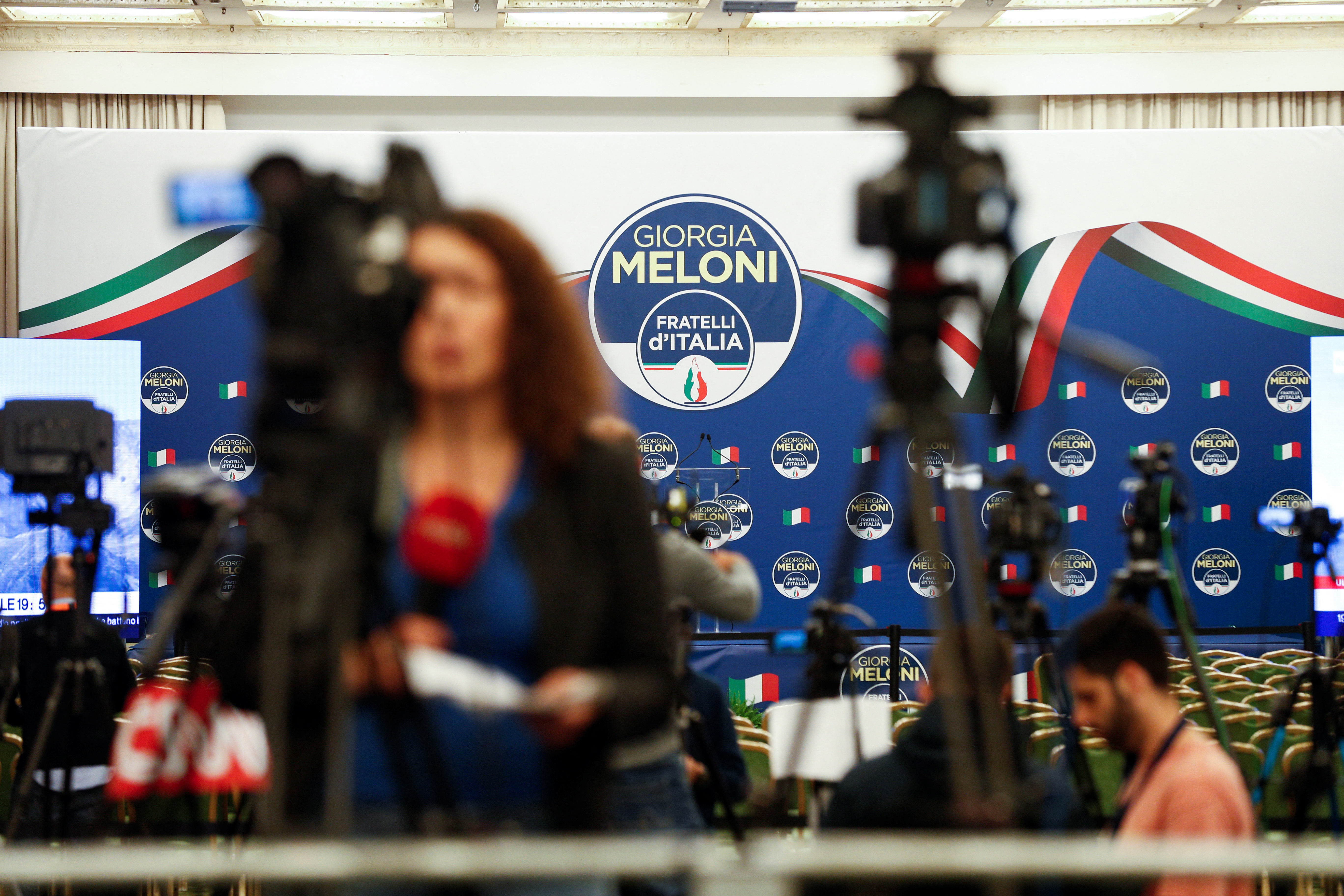 “Finally, finally”, exclaimed almost in unison Raffaele and Corrado, two young members of the Brothers of Italy who, in front of the Parco dei Principi hotel, awaited (with a long time ahead) the arrival of Giorgia Meloni. “I feel sorry for those who preceded us, those who for decades fought against the tide and kept the flame alive so that we, today, could see victory,” Corrado said.

It was not yet 10:00 p.m., the polling stations were still open and there was no official data to confirm the victory of Giorgia Meloni and her party, Brothers of Italy, heir to the heirs (Italian Social Movement and National Alliance) of the old fascist ideology. An ideology that, according to the two boys, about 20 years old and dressed in sportswear, “could have been fine for its time, but not anymore, please, a century ago of all that.”

The victory, despite the hour, was clear. Raffaele and Corrado showed on the screens of the phones the exit polls that could only be made public after 11:00 p.m., once the schools closed and the count began. “All the polls say it, we have won widely,” they proclaimed.

And they returned to the issue of fascism, which has haunted Meloni throughout the entire campaign. “Giorgia has repeated it over and over again, we are a democratic, nationalist right-wing party (“nationalist in the good sense, in the patriotic sense”, Raffaele clarified), that only thinks of improving Italy after so much time in decline” Corrado explained, showing the manners and ease of a future political leader.

The fact is that the two boys were alone in front of a five-star hotel, the Parco dei Principi, in a not too central area, the expensive Parioli neighborhood of Rome, and with no other company than many journalists, many bodyguards and a lot of police. . No leader, no flag, nothing. It did not seem the most appropriate place for the militancy to celebrate the victory, the first victory in general elections since, in 1946, the Italian Social Movement was founded with the remains of the fascist shipwreck which, 30 years later, still under Giorgio Almirante’s command, some anti-fascist partisan began to join (it was the case of Enzo Giacchero) in the name of anti-communism.

Gianfranco Fini was the Moses of the Italian extreme right. It was he who, now deceased Admiral, broke with post-fascism and created an extreme right-wing party, Alianza Nacional, capable of integrating itself into republican institutions. Silvio Berlusconi, the following year, integrated the young National Alliance (supported by 13% of the votes) in his coalition and took it to the Government.

Fini ended up falling out with Berlusconi, forcing his downfall and causing a crisis that destroyed him and almost destroyed his formation. Giorgia Meloni, the most charismatic leader for the youth of the party, usually remembers the great effort that it cost her then to avoid a massive flight of militants, especially the younger ones, who did not understand the trip to the center of Fini and his break with Forza Italy, whose consequence was the formation of a center-left government.

From then on, the young Meloni and the old Ignazio La Russa (whose brother caused an embarrassing situation the other day by making the fascist salute at a funeral) encouraged the creation of another party, more to the right than the National Alliance, but less conditioned by the Mussolinian heritage: the growth of similar parties in Europe, such as the French National Front, helped to normalize what was eventually called the Brothers of Italy, using the first phrase of the national anthem.

But Brothers of Italy was, until these elections, a relatively marginal party. Five years ago it barely exceeded 4% of the vote. The recent growth must be attributed to Meloni, who refused to support the technical government of Mario Draghi (which, with the current perspective, was a success) and knew how to acquire prominence.

In a flaccid electoral campaign, without news or great public interest, the only thing that stood out was Meloni. Because he excited his people. Because he frightened political opponents (and the European institutions). And because he knew how to use humor, a fundamental thing in social networks. Her last video on Tik Tok, just before the vote, was a marvel of simplicity and impudence: Meloni, with two melons in front of her breasts and a wink. No more was needed. In the previous one, he explained that whoever did not want to vote for the Brothers of Italy should take the ballot and cross out the party’s symbol (the fascist flame) with a cross. And another wink. Because that is precisely how you vote.

Giorgia Meloni had announced that she would vote in the morning. She arrived at the polling station, saw many journalists and left. She decided that she would vote at night, just before the polls closed. The news traveled the networks. It was the umpteenth demonstration that she already knows how to behave like a star.