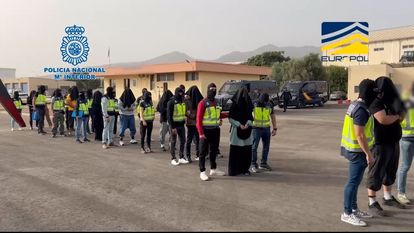 Police officers guard the 11 arrested last Tuesday for jihadism in Melilla and Granada for their transfer to Madrid. NATIONAL POLICE (NATIONAL POLICE)

They began by spreading the jihadist ideology on social networks and the Internet, but ended up holding face-to-face meetings, some with more than 50 young people, to recruit new “soldiers of Allah”. The jihadist cell dismantled on Tuesday by the National Police after the arrest in Melilla and Granada of 11 people and another two in Morocco, met with dozens of young people, some minors, in places and even parks under the guise of meetings playful ones that ended with the hearing of “nasheed”, musical themes aimed at inflaming jihadists, according to sources close to the investigation. This Thursday, the two judges who led the operation have ordered the entry into prison of eight of those detained in Spain for their alleged links with the Islamic State (ISIS in its acronym in English), exaltation, indoctrination and terrorist self-training. The other three have been released with precautionary measures.

The operation that led to the arrests – actually two different operations in which those investigated in one and the other had links – began at the end of 2020, after experts in the fight against terrorism detected the intense dissemination of jihadist content that was was deploying from some social network profiles carried out “aimed at the recruitment and indoctrination of people, mainly young people from the autonomous city of Melilla”, as detailed by the Ministry of the Interior in a note. Much of this content was created by the investigators themselves, who had “the support of people already convicted in the past of terrorism crimes who had not abandoned their jihadist postulates,” adds Interior. Some of them had had a relationship with one of the members of a cell dismantled in December 2019 who was also allegedly engaged in “capturing, indoctrinating and recruiting new followers.”

However, the investigations took a turn when the agents detected that, in addition to the activity on social networks, the suspects – all men between 35 and 60 years of age – went a step further and summoned young people to hold meetings in different places in Melilla, including mosques and even outdoors in parks. “They did not have a fixed format,” detail the sources consulted. Sometimes a few young people attended and, in others, the agents counted more than fifty attendees. Sometimes, they lasted a few hours and in others, they lasted almost all day. The young people thought they were going to what they had been told would be a day of coexistence in which they would also do physical exercise, while other times they were told a more religious content.

The members of the cell that attended each meeting, which were usually between four and five, took advantage of these meetings to launch a radical Islamist message to convince the attendees to “become soldiers of Allah and carry out jihad”. To do this, they sometimes used the “nasheed”, jihadist musical themes that have catchy rhythms and include the sounds of gunshots or the clash of sabers. Police experts consider these compositions very effective in attracting new followers. In the 13 searches carried out -12 in Melilla and one in Granada-, the Police have seized abundant documentation and computer equipment, as well as video equipment used for the production of audiovisual material that they disseminated on social networks. “Prohibited weapons” have also been located, although none of fire, detail the sources consulted.

Along with the nine members of the cell who carried out this face-to-face training, the Police also arrested two women who had links with them, but who allegedly acted independently. The Police accuses both of spreading jihadist content on social networks and the internet “aimed at indoctrination in the extremist postulates” of the Islamic State, says Interior. The note highlights that it “incited the commission of violent actions.” The two women, one of whom has been imprisoned, prepared the audiovisual material that they disseminated, for which they used files distributed by the ISIS production companies.

The extensive operation, directed by the General Information Police Station, has also had the participation of agents from the Provincial Information Brigades of Melilla, Granada and Malaga. In addition, the General Directorate for Territorial Surveillance (DGST, for its acronym in French, the Moroccan internal intelligence service), in charge of carrying out the two arrests in the Moroccan town of Nador, and the collaboration of the National Intelligence Center ( CNI) and Europol, the EU police agency. With the 13 arrests in Spain and Morocco on Tuesday, plus another carried out that same day by the Civil Guard in Zaragoza, there are now 48 people arrested -seven of them in other countries- in operations by the Security Forces against jihadist terrorism in what what’s up this year The figure represents a significant increase compared to those registered in 2021 (when there were 40) and 2019 (then there were 38 arrests). In 2019, in the midst of a pandemic and with mobility limitations both within Spain and between countries, there were only eight detainees.